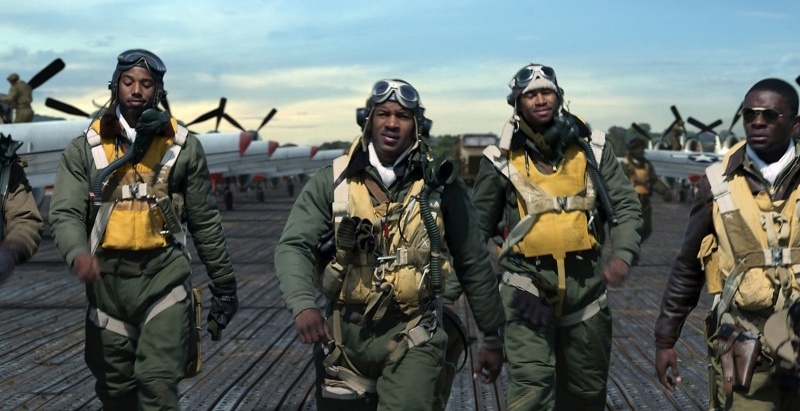 Full disclosure time – I love World War II movies. From the epic to the just alright, I’m pretty much all in if it’s dealing with the Allied forces clashing with the Axis.

Outside of a cable movie starring Laurence Fishburne, Hollywood hasn’t been as eager to explore the exploits of the Tuskegee Airmen, a squadron of African-American pilots who battled both the Nazis and segregation in showing their worth.

George Lucas (Star Wars) agreed and put his considerable clout and financial backing behind Red Tails, a more action-oriented take on the pioneers from Tuskegee.

The film opens with a U.S. bombing run that is attacked by a squadron of Nazi fighter pilots and the lack of discipline of the U.S. pilots who simply want to kill a few Nazis.

Director Anthony Hemingway gets his first stab at helming a film after serving as the assistant director for films including Ali and Changing Lanes, and while navigating through a few rough spots — the romance subplot never really flows with the film — he puts together a thoroughly more enjoyable World War II film than Michael Bay’s Pearl Harbor.

Frustrated by sitting on the outskirts of the battle in Italy performing little more than strafing runs, members of the Tuskegee training program, are left with little more than imagine what it would be like to actually be contributing members to the war effort.

David Oyelowo stars as Joe Little, the appropriately nicknamed Lightning, who never met an order he wouldn’t disregard and a Nazi obstacle he can’t take out. Joe’s aggressive nature is only slightly tempered by his best friend and squad commander, Marty ‘Easy,’ Julian (Nate Parker, The Great Debaters).

The rest of the squad is comprised of stock characters — the religious one, the younger pilot, the cocksure pilot who just wants to shoot down Nazis, etc. — but surprisingly R&B crooner Ne-Yo has the most memorable supporting role as a laid-back, guitar-playing pilot.

Alison Mitchell’s costume design provides a nice throwback look to when pilots were portrayed as the dashing, suave branch of the military.

Finally given the opportunity to fly into battle, the group doesn’t disappoint and soon become the pilots of choice for escort missions and winning over those who didn’t think they could handle the job.

The fight scenes are spectacular with planes darting between bombers and the skies filling with gunfire and explosions. It definitely has the look of a more realistic Star Wars space sequence with the complicated maneuvers and danger from every angle approach.

At times the script — written by John Ridley (Undercover Brother) and The Boondocks creator Aaron McGruder, in his feature film debut — is a little too obvious and heavy-handed especially when the Airmen interact with their white counterparts.

The script is a bit erratic as some scenes are very well-crafted getting the intended laughs from the audience, while others come across as a bit hokey.

Most of the plot doesn’t really touch on the struggle of the Tuskegee Airmen in having some measure of equality, save a few token scenes and a N-word bomb, but it appears intentional to make the film more like your standard war film as opposed to one that divides the audience with the racial tension.

The decision to go with a lesser-known cast is a smart move as the audience doesn’t have preconceived notions of whom the big star is and expect them to survive every fight.

Academy Award winner Cuba Gooding Jr. and nominee Terrence Howard are in key supporting roles, with Howard especially providing some memorable scenes, but for the most part the film is about the newer faces, who acquit themselves well.

Red Tails isn’t a church-theme flick, a romantic comedy or starring a guy in drag. It’s a solid action film inspired by real-life events and hopefully will open the gates to a new genre starring African-American actors.