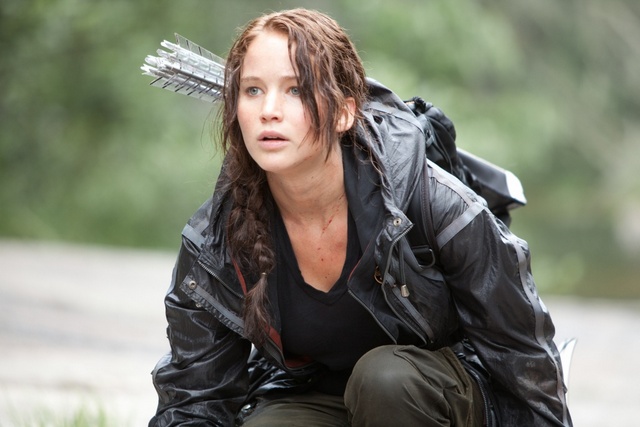 The Hunger Games is the latest ambitious beloved book series turned feature film hoping to follow in the footsteps of Harry Potter and Twilight to become an acclaimed movie franchise. Fortunately, it exceeds those lofty expectations to become the first genuine can’t miss film of the year that you’ll want to go back to the theater to see over and over again.

Set at some point in the future, famine and drought left North America on the verge of ruin and a war nearly completed the job. The winners established a new world order, renaming the country Panem and the states have been replaced with 12 desolate districts and one breathtaking and pristine Capitol, which rules the nation.

The screenplay – credited to Billy Ray, director Gary Ross and series author Suzanne Collins – doesn’t fully go into how the inhabitants of the Capitol were selected, but they have overindulged with the finer things in life with gaudy, ill-matching outfits adorned with multi-colored hair to resemble what surely must be Lady Gaga’s version of heaven. It’s a stark contrast to the youth of District 12 whose wardrobe appears stuck in the 1950s.

In a show of force and to remind the dredges who has all of the power, the Capitol hosts the Hunger Games where one boy and girl between 12 and 18 is selected from each district ] to participate in a winner take all, fight to the death competition.

Part Olympics/part Survivor, the game makes an easy comparison to our culture’s fascination with reality TV and competition. If sponsors like a competitor, they’ll send in much needed survival items such as food or medicine via drones. Not too hard to picture McDonalds or Verizon doing that in the next season of Survivor, is it?

Forced into this year’s games is Katniss Everdeen (Jennifer Lawrence, X-Men: First Class). Katniss had escaped the ‘honor’ of competing for another year, but her little sister wasn’t as fortunate, so Katniss volunteers for a likely death sentence as District 12’s female representative.

Lawrence has fast become one of my favorite actresses under 30. She blends into her roles effortlessly without playing the same character with a slight tweak here and there or having to resort to some drastic look to convey a new persona and in Games, she once again doesn’t disappoint and ably carries the film.

Katniss is joined by Peeta Mellark, (Josh Hutcherson) an unassuming young man who knows he’s just received his death sentence but wants to enjoy this last ride for all it’s worth. Their mentors, Effe Trinket (an almost unrecognizable Elizabeth Banks in garish makeup and attire) and former Hunger Games winner Haymitch Abernathy (Rampart’s Woody Harrelson in a fun supporting role), provide much of the humor while stylist, Cinna, (musician Lenny Kravitz) makes sure their public appearances are memorable.

Ross takes his time setting the scene, but his pacing works in showing the difference of Katniss’ regular life and as a celebrity at the Capitol.

This sentiment isn’t shared by President Snow (Donald Sutherland), who considers Katniss too inspirational a hero who could threaten the Capitol’s control if she’s allowed to win. Not that Katniss will have an easy path to victory ahead of her as the ruthless members of District 1 and 2 have been training all their lives for the contest and typically win the annual games.

Once the games begin, the film takes a far darker tone with teenagers brutally killing young kids and some pretty violent deaths complete with blood splatters and broken necks. For all the buildup, Ross doesn’t shy away from the violent undertone of the games to really capture the depravity of the Capitol’s citizens thrilling to the deaths of children. Ross goes in too close in shooting the more physical fights and over-edits so it’s hard to make out the action, but beyond that his direction is smooth and unobtrusive.

Lawrence is solid throughout, but her performance in one scene is the best reactions to death I’ve seen in years. It’s so powerful you have to remind yourself that this is just a movie and that this didn’t happen to the ‘real’ Katniss. Set in a forest backdrop, the scenery is inviting, minus the homicidal teens running around.

Katniss has to rely on her skill with the bow and the lessons she’s learned from Haymitch to overcome the odds, but finds her conflicting feelings for her friend-turned-rival Peeta and the ever-changing game rules just as challenging.

You’re going to be hearing a lot about The Hunger Games in the next few days and this is one movie-event worth the spectacle and hype so go ahead and catch a screening this weekend if you can still find a ticket. It’ll be worth it.