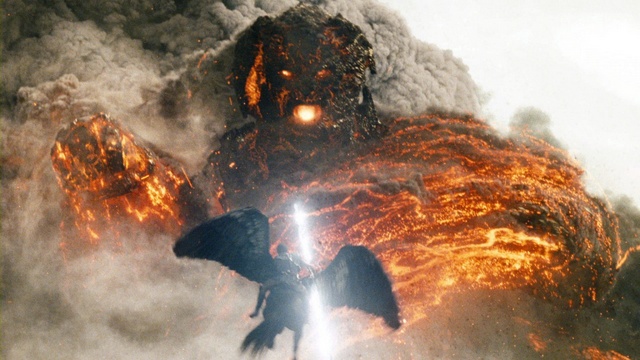 I’m not one to rave about a sequel simply because it’s better than its lame predecessor, but Wrath of the Titans is in every conceivable manner a more entertaining and enjoyable follow-up to the 2010 Clash of the Titans and this time offers a fun outing actually worth seeing.

Of all the 2010 summer movies least deserving of a sequel I would have easily picked Clash of the Titans. With lousy special effects, wooden acting and the absolute most pathetic 3D this side of The Last Airbender, there was little to like but the performances of Liam Neeson and Ralph Fiennes, who deserved far better.

And amazingly, they (and audiences) get that with this sequel that fixes all of the problems of a film that really didn’t merit a follow-up to craft a titanic big-screen adventure even worth seeing in 3D.

It’s been a decade since Perseus (Sam Worthington, Man on a Ledge) defeated the Kraken and he’s gotten married, become a father, a widower and living as a fisherman with his son, Helius (John Bell).

Perseus has been tormented as of late by premonitions of a great menace, which is soon confirmed by his father, Zeus (Neeson, The Grey) who seeks the aid of his half-god/half-human son to stop Zeus’ father, Kronos, from destroying the world. Zeus needs Perseus since humans are praying less to the gods and their powers are fleeting.

Screenwriters Dan Mazeau and David Johnson set up an easy to follow plot, but they struggle giving characters any depth. None suffer more than Perseus, who after being told that the entire world is jeopardy if he doesn’t help Zeus, says Helius is his priority. Some hero. Good thing Helius isn’t part of the world … oh, right.

Director Jonathan Liebesman (The Texas Chainsaw Massacre: The Beginning) doesn’t have a lot to work character-wise so he puts his all into giving the film an epic look with sprawling sets and perspectives to make good use of the 3D technology so the action scenes are the best parts of the film.

Zeus turns to his brothers, Poseidon (Danny Huston) and Hades (Fiennes) but oddly, none of the other gods are present save another of Zeus’ sons, Ares (Edgar Ramirez, Domino). Ares and Hades quickly betray their alliance and kidnap Zeus in hopes to gain Kronos’ favor so he will allow them to retain their godhood after he unleashes his evil minions on the world.

The special effects team crafts impressive CGI characters that naturally blend into the movie universe including Cyclopses, an ash-covered centaur-like creature with two torsos and a minotaur.

Perseus eventually realizes he does need to join the fight and partners with Queen Andromeda (Doom’s Rosamund Pike who replaces Alexa Davalos) and his cousin, Agenor (RocknRolla’s Toby Kebbell who easily steals all of his scenes as he’s given the majority of the funny lines). They’re joined by random fodder characters and Bill Nighy’s Hephaestus, a fun character who needed more screen time.

Not all is well in the realm however. 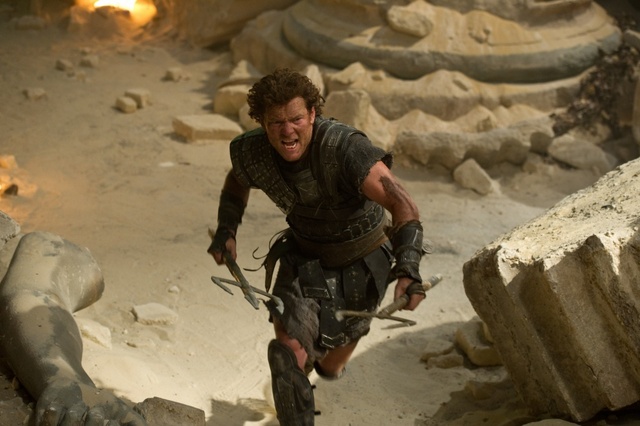 I like Worthington and still think he has the makings of a real box-office star, but he comes off as such a generic, uninspired hero and having him play a straight-laced protagonist doesn’t play to his strengths. He seems more of the roguish-Han Solo type lead and Perseus is a very plain, dull character.

Still, Worthington is just an ill-fit for the role and doesn’t drag the movie down with his performance. That ‘honor’ easily goes to Bell, who is “I wonder how he’s related to the director” bad and his mouth agape expressions go from simply odd to straight out unintentionally comedic. Amazingly, Peter Jackson has Bell appearing in his upcoming The Hobbit films. I can only hope they’re very, very small roles. Pun intended.

Warner Bros. deserves a lot of credit for making an investment into delivering a better sequel. Since the original made $493 million worldwide, it would have been easier for them to just do what worked before — even if few people actually liked the finished product — but instead they opted to make a quality film and one that should be rewarded so go check it out.