With Captain America: The First Avenger, Marvel Studios delivers another winner. Taking a creative spin on the Avengers leader, The First Avenger is a period piece that works beautifully. In establishing the Avengers’ conscious, star Chris Evans proves the right man for the job. One who could be the pure-hearted hero the Avengers franchise needed.

The other Avengers have had their spotlight film to showcase the characters. From Robert Downey Jr.’s dynamic turn as billionaire playboy Tony Stark in two Iron Man films to Edward Norton’s stint as the gamma-radiated scientist turned monster in The Incredible Hulk. The riskier two were definitely Chris Hemsworth’s Thor and First Avenger.

Director Joe Johnston was in his wheelhouse with a 1940s period hero piece. His experience with The Rocketeer helped inform pacing, tone and spirit to great effect. The pressure wasn’t on Johnston since the previous Avenger introduction films already had fans stoked for the team assembling. Even if it stumbled, Cap could quickly be redeemed in the ensemble piece. Instead, Johnston creates the definitive hero — one who’s selfless, honest and a skilled fighter. By the film’s conclusion, Johnston left Cap in tremendous position to be a standout in the Avengers.

Evans stars as Steve Rogers, a 98-pound weakling who has much more heart and courage than muscle. The U.S. has just entered into World War II and Steve, like so many of his friends and neighbors, wants to do his part for his country.

To help convey Rogers’ weak physique, Evans’ face is superimposed on a smaller, scrawny body. The effect isn’t quite on the level of the masterful work done in The Curious Case of Benjamin Buttons, but it’s pretty good. It’s during these scenes Evans makes Rogers a relatable, likable character. Getting to the core of Rogers is important to show the powers didn’t make the hero.

His frail condition disqualifies him from service multiple times, but Dr. Erskine (Stanley Tucci) recruits him to be a test subject for a super soldier formula. Less convinced is Col. Chester Phillips (Tommy Lee Jones in an excellent supporting role) who thinks Rogers can’t possibly measure up.

Rogers does gain the respect of trainer Peggy Carter (Hayley Atwell) who thinks Rogers has potential. With the help of famed inventor Howard Stark (Dominic Cooper channeling Downey’s Tony Stark perfectly), Erskine transforms Rogers. The 98 pound weakling is now replaced with a GQ model with chiseled abs and muscles on top of muscles.

Stuck as a propaganda tool Captain America instead of a soldier, Rogers breaks rank to rescue his captive best friend Bucky Barnes (Sebastian Stan). Bucky’s company was caught behind enemy lines for experimentation by the Nazis.

This brings Rogers into direct contact with the Red Skull (played in perfect full mustache-twirling fashion by Hugo Weaving), the head of a splinter Nazi faction dubbed Hydra.

The war setting also helps provide a strong sense of purpose to Rogers’ heroic mindset. Rogers makes for the best kind of hero because he doesn’t see himself as special. That optimistic approach makes for a film that rekindles that kid in all of us, who before the Internet, could be inspired by a guy like Captain America.

The effects aren’t as convincing as some other big-budget blockbusters, but it’s more a matter of Johnston’s scope for the action being more grandiose than his budget. It never looks fake, but the effects are a bit soft. Still, it was a welcome change to see a comic book movie where the director really tries to raise the level on the action scenes and not take any chances.

As usual, there’s the always-welcome cameo by Stan Lee and some nice nods to the source material sure to make comic fans smile. 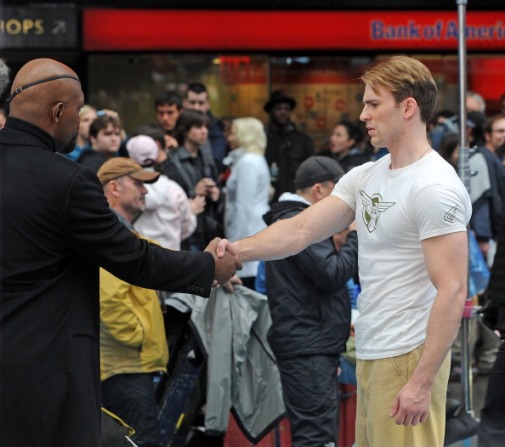 There’s been some talk of comic book movie fatigue, but as long as Marvel Studio keeps cranking out excellent films like First Avenger, there’s no reason to think audiences won’t flock to their latest outing. There are 10 more months until The Avengers’ hits theaters May 4. After First Avenger that could be the longest 10 months in decades.