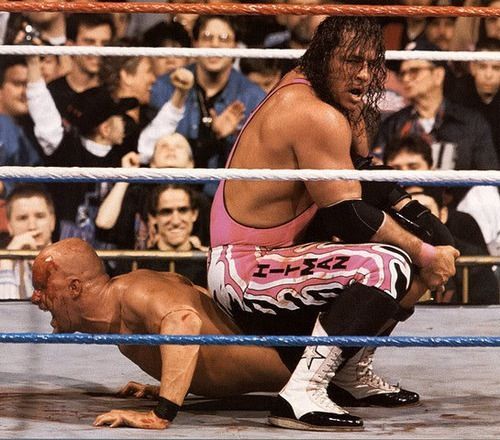 My job’s allowed me to meet some really fascinating people. Actors, football players, beauty pageant winners, cheerleaders, singers, directors and some truly wonderful people who unfortunately will never be featured in magazines or on TV to share their amazing stories.

Every so often, I’m able to meet celebrities, which is always an interesting proposition for me. There’s the excitement of talking to someone whose work you admire, but then there’s that apprehension of talking to someone you’ve always enjoyed and they turn out to be a jerk. For me, that means I have a hard time seeing them in the same way so there’s always the chance of a star sullying your opinion of them in a brief five-minute span. Multiply that by a thousand or so if it’s someone you enjoyed when you were a kid/teenager.

But given the opportunity to meet one of my teenage heroes — WWE Hall of Famer Bret “The Hitman” Hart — I figured it was worth the risk to meet one of my two favorite wrestlers. Sting’s the other one. Bret was in Maryland on June 13 as the featured Legend of Wrestling for the Bowie Baysox. The Baysox are a minor league team, but the fun, family atmosphere typically makes it more enjoyable than major league games.

Members of the media were going to be able to talk to Bret following his break from a free autograph and photo session around 8.

Bret arrived around 6 and the line stretched to the other end of the stadium so in an effort to interact with as many fans as he could before the 9:30 cut-off, he skipped the break. Classy move and he went up another few notches with me for that gesture.

A little after 9:30, I was able to talk with him and in complete loser fashion, I froze up actually coming face to face with Bret ‘The Hitman’ Hart. I was more composed talking to Gabrielle Union! I really think there’s something to meeting a childhood hero as opposed to someone you admire after you’ve become a jaded, cynical adult. And of course, they always look bigger than you imagine when you see them in person.

Finally finding some measure of composure, I asked him a few questions:

What’s it like coming to an area and still seeing lines of fans who wait for hours just to see you?

Bret: It’s really nice. I appreciate the fact that they came here. I knew that I had a lot of fans between Maryland, D.C. and the surrounding areas that I don’t get to come out to all that often so to see them it’s nice.

You’ve actually had a pretty big moment in Maryland winning the WWF (WWE) title in 95 in Landover.

Really enjoyed your book (“Hitman: My Real Life in the Cartoon World of Wrestling”). Any plans to do another one?

Bret: I’d like to do a second book. Not sure how much wrestling would be in there, but I imagine it’d be some. There’s some old stories that were edited out of the first book. I’ve had an interesting life without wrestling so I would want to include that as well.

What would you consider some of your more underrated matches/opponent?

Bret: My matches with Hakushi. We had good matches considering he didn’t speak much English. He was a smaller Japanese wrestler and he had a lot of unique moves that I thought would be fun to interact with and incorporate into my matches.

It’s an awesome experience meeting one of your childhood heroes and even more so when they’re really nice, humble guys like Bret who still appreciate their fans. If you get a chance to meet him, however long the line is, I’d definitely recommend it.