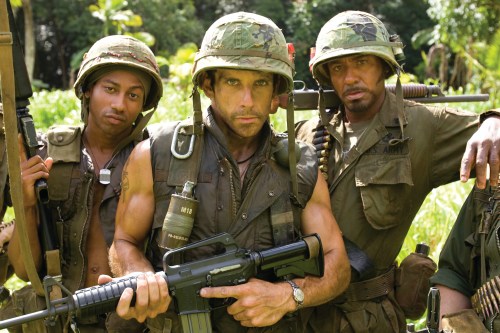 From the opening trailers to the end credits, you won’t be prepared for Tropic Thunder. 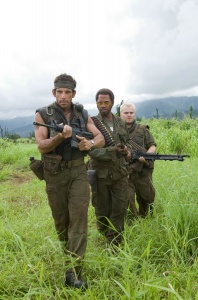 But when the cameras aren’t rolling, the high maintenance foursome prove increasingly more difficult for the director Damien Cockburn (not exactly the most subtle of names, no?) played by Steve Coogan.

Hoping to turn his spoiled stars into real action heroes, Cockburn takes the advice of film consultant Four Leaf Tayback (Nick Nolte) and sends them to a remote jungle where he hopes to capture their real emotions without any of the comforts of home. But Cockburn and Tayback don’t take into account that they’ve led their stars to a genuinely hostile environment – one in which will cost them their lives – if they don’t realize that this time the action is for real. 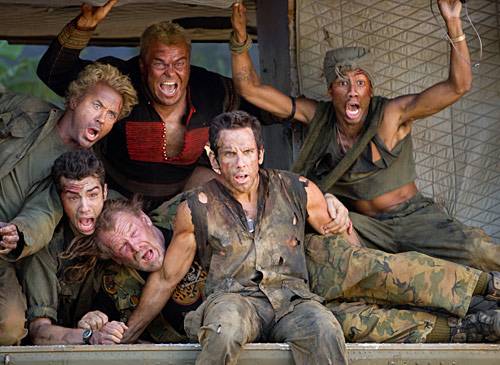 It’s amazing that no one thought of the concept before. Not in a parody spoof fashion such as Hot Shots, but slightly smarter, playing up on America’s fascination with its celebrities and action movies. For a comedy, it strikes the perfect balance of keeping you laughing while providing a smart social commentary on what we consider entertainment.

Stiller, and fellow co-writers Justin Theroux and Etan Cohen not only get you engaged with the principal actors – Tugg wants to be a serious actor, Portnoy has to deal with his drug habit and Kirk is losing his own identities  in his characters – but also work in some hilarious cameos from some of Hollywood’s brightest and best.

With the possible exception of Heath Ledger’s career defining performance in The Dark Knight, no actor has had a hotter 2008 than Downey Jr.

Starring in a $300 million plus grossing summer film like Iron Man would be the sole highlight for many an actor, but if possible, Downey gives an even more entertaining performance in Thunder. 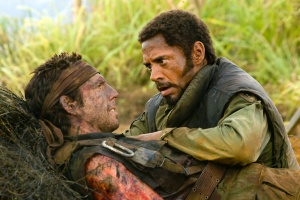 Downey was a great choice for the role because, like his character, he is a chameleon actor – able to blend into whatever persona his movie calls for and delivers exactly what is necessary.

Kirk’s decision to make his character a black man complete with dark makeup would have been more than a tad controversial if not for  Chino continually calling Kirk out for trying to act “black.”

While Al Sharpton and Jesse Jackson won’t be leading Thunder boycotts, the film has garnered a significant backlash from mental disability advocates over its portrayal of mental retardation. It’s a totally valid complaint. One of the more memorable scenes occurs when Kirk advises Tugg never to go “full retard” in acting. It’s oh-so un-PC but you’ll likely be too busy laughing to care.

Tom Cruise provides the other standout performance as Les Grossman, a balding movie company head with Popeye arms, hairy chest and a penchant for dancing to hip hop songs. The sight of Cruise getting down to Ludacris is totally worth the price of admission all by itself.

Tropic Thunder perfectly parodies the “kill everything in sight and then blow it up for good measure” summer movie mentality. It’s a hilarious laugh riot that will have you cracking up thinking about it days afterward – the mark of a great comedy.