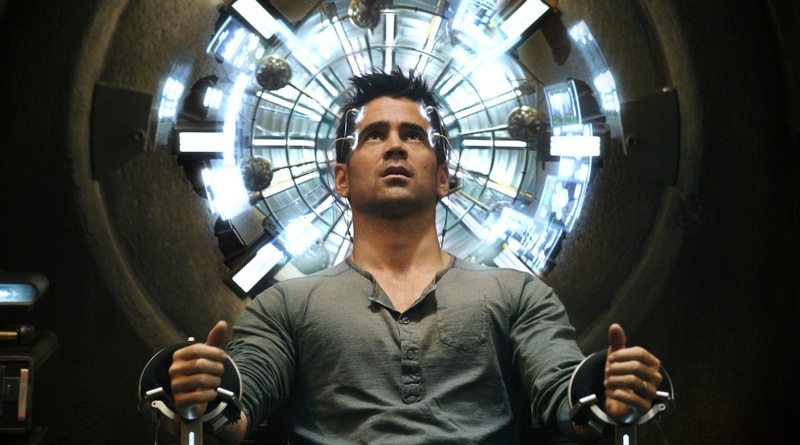 Total Recall (take 2) is the ideal science-fiction film for anyone who hasn’t seen the 1990 original or cares about particularly compelling movies. 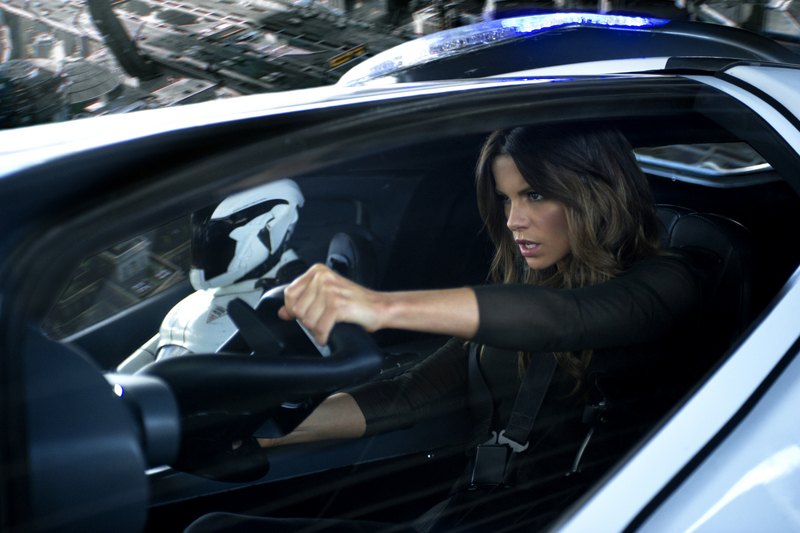 The 2012 version is technically sufficient — the plot’s decent, the actors do their part and the advances in technology are dramatic — but it’s neither especially fun or exciting. You can appreciate it, but it’s not gonna suck you in and really make you invest in any of it. This is a summer movie spectacle you’ll sit through and by the time you leave the parking lot, you’ll be hard pressed to think of anything you liked about it.

Screenwriters Kurt Wimmer (Salt) and Mark Bomback (Unstoppable) don’t fully develop any characters and their motivations are overly simplistic, but they make a much more critical error that dooms the film to mediocrity.

Total Recall isn’t the kind of movie that needs to be played straight. The concept is out there. When people think of the original, they think of Mars, mutants, aliens in human bodies, outlandish devices, the dwarf, alien arms, the hooker with the three breasts and Arnold Schwarzenegger’s brawny protagonist spitting out one-liners and puns that only work coming from him. 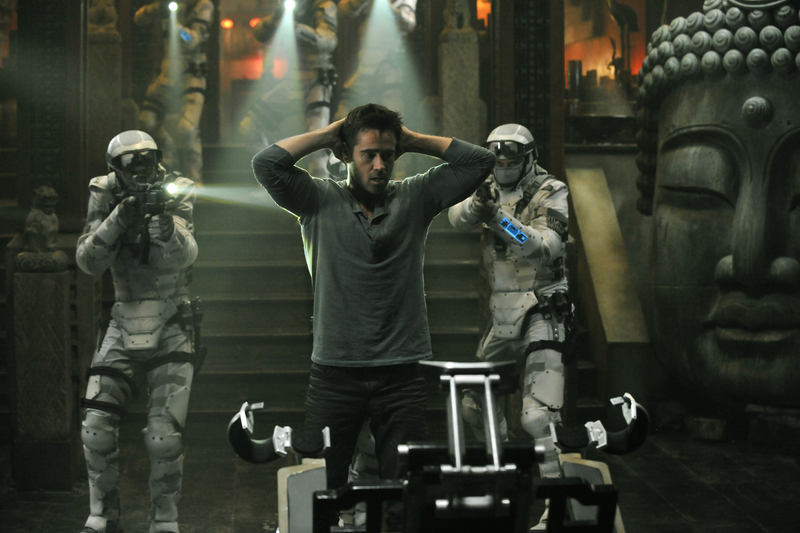 Wimmer and Bomback ditch all of the fantastical elements — save the three-breasted hooker, which doesn’t make sense with the otherwise serious tone of their film — and toss out all the fun along with it.

In their take, Earth’s resources have been plundered to the point where there’s two classes — the pristine cityscape of the British federation, under the ruthless grip of Cohaagen (Bryan Cranston, Rock of Ages) and the lower class slums in Shanghai, where the cramped populace is constantly beaten down by never-ending rains.

It’s in this slum that Quaid (Colin Farrell, Daredevil) starts to be plagued by dreams of a different life — one where he’s a freedom fighter teamed with a beautiful ally, Melina (Jessica Biel, Stealth), trying to avoid being caught by a group of white and black clad robots.

And like clockwork, he awakes to his homely apartment he shares with his wife, Lori (Kate Beckinsale, Van Helsing) and back to his lowly job as a factory worker. 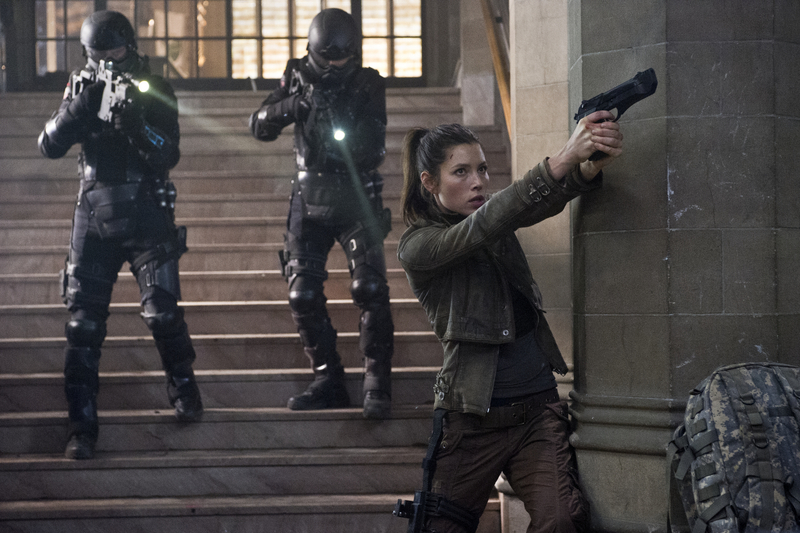 Intrigued by a company, Relkill, that offers a temporary escape from the dullness or normal life through a virtual reality program, Quaid opts to give it a try. The stay-cation doesn’t go according to plan and a squad of soldiers attempts to arrest Quaid, who finds himself easily able to dispatch his would-be captors.

Lori isn’t exactly pleased with this development and tells Quaid he’s not who he thinks he is and she’s not really his wife. Worse, she tries to kill him in easily the film’s best fight scene. Shame it’s so early in the movie as nothing else is able to match its intensity.

Reunited with Melina, Quaid seeks the answers to his true identity, which could hold the key to preventing an all-out class war.

Much like Paul W.S. Anderson with his wife, Mila Jovovich, in the Resident Evil franchise, director Len Wiseman seems overly preoccupied with showcasing his wife — Beckinsale — as the baddest woman onscreen in every scene.

Beckinsale has proven in the Underworld series — also directed by Wiseman — that she can handle herself in an action scene. Wiseman can’t effectively tell Quaid’s story as he’s more interested in Lori. Despite playing a character that’s the combination of Michael Ironside and Sharon Stone in the original, Beckinsale’s Lori isn’t very interesting and is just the hunter chasing down our protagonists.

Farrell is really the only actor who gets much to work with character-wise and he gives his faithfully capable best, but there’s only so much he can to do with the script to make you forget how Schwarzenegger made the role one of his more memorable performances. 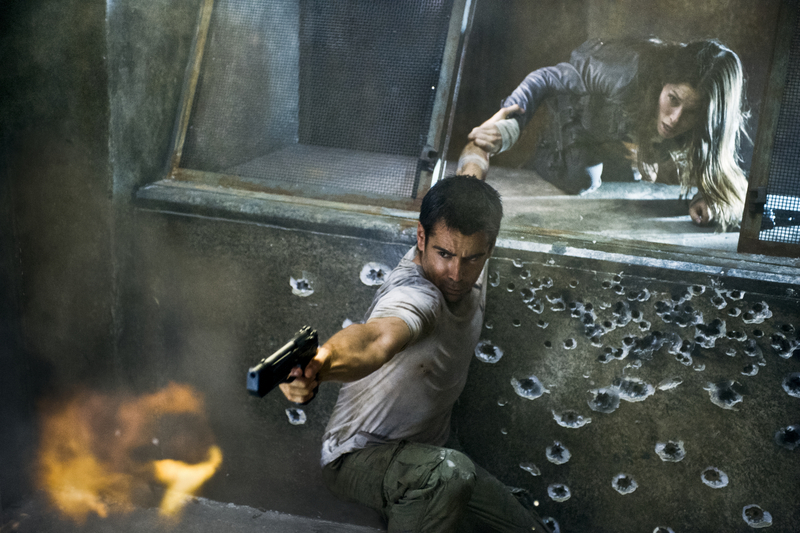 Where the film does shine is the well-detailed set design. Buildings are stacked atop each other and the slums have a distinct depressed look to them, further enhanced by the non-stop raindrops. The costumes — particularly the federation’s police/military force with its snazzy Stormtrooper-esque white and black attire — also deserve some kudos. If only the script was good as the film looks we’d be on to something.

Given their reluctance to embrace the original’s more science fiction elements, I was pretty disappointed that Wimmer and Bomback didn’t come up with anything different, be it a new twist or something that wasn’t done better the first go round. They don’t and the only thing you’ll recall from this remake is how much more you enjoyed the original. There’s nothing you’ll want to remember here.