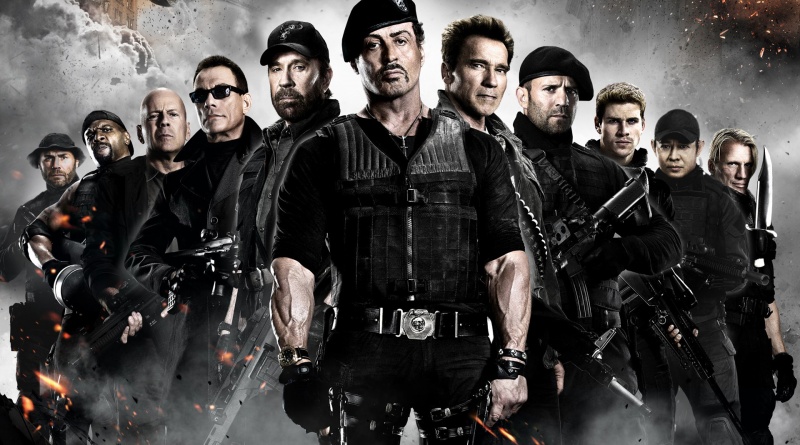 My inner caveman review of The Expendables 2 — Stuff blow up good. Real good.

Assuming you want a bit more in your reviews though, here goes: The Expendables 2 is a star-studded salute to summertime spectaculars that more than gives action fans all they could want in a big-budget blockbuster. 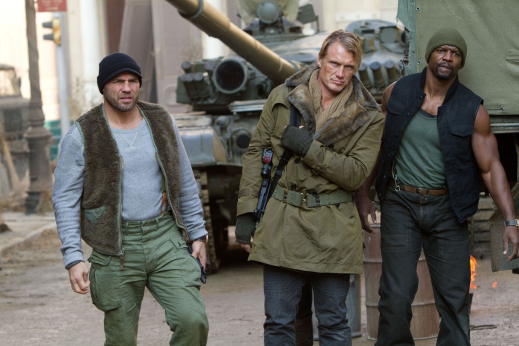 By the time The Expendables 2 title comes on screen, the body and explosions count is pretty high. No worries about this franchise getting all pansy on us and they’ve even managed to work in a new guy — Billy the Kid (Liam Hemsworth, The Hunger Games).

When he was announced as part of the cast, Hemsworth stuck out like the Christian Laettner of this action Dream Team, but he quickly makes Billy the Kid likable.

Church (Bruce Willis) calls in the favor the crew owes him for the last mission and has them make a fairly standard retrieval mission accompanied by his own specialist — Maggie (Nan Yu).  The mission goes badly in a hurry as they encounter a sunglasses-wearing thug and his personal army. 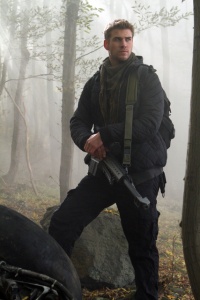 ), wasn’t just called The Hench Man. Vilain decides to teach the crew some respect and kills one of them, prompting the others to go on a revenge quest — a faithful staple of pretty much every 80s/90s action movie.

Along their path of vengeance, the gang meets the man/myth, Booker (a fun, self-referential supporting role by Chuck Norris); have a shoot-out in a mock New York city, fight tanks, dive bomb bridges and work in more screen time for Willis and Arnold Schwarzenegger. In short, everything you’d need in an Expendables sequel.

Stallone, who co-wrote, starred and directed the original, hands the directing baton over to Simon West (The Mechanic) and the exchange is smooth with West fully appreciating what the audience want from this movie complete with a slow-mo, wide panel of Stallone, Schwarzenegger and Willis firing their guns off together. 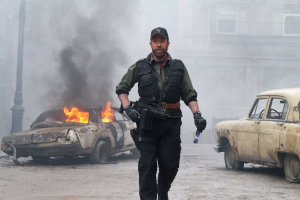 If anything, West finds a way to work in even more, brutal action than the original, yet balancing that with the lighthearted camaraderie that makes for easy laughs and investment in characters whether it’s Lee and Barney bickering like brothers or Toll Road and Caesar going back and forth like a married couple. It’s easy to care about characters who appear to have a deeper connection/history beyond what we’re shown onscreen.

You get  a sense that everyone involved in the process — from the stars, writers, West and even the audiences — are in on the gag that this is a franchise that specializes in unapologetically, borderline ridiculous action sequences. And if the stars make some puns and winking references to their earlier work it’s hard to complain since it’s done so tongue-firmly-in-Teflon-coated-cheek. 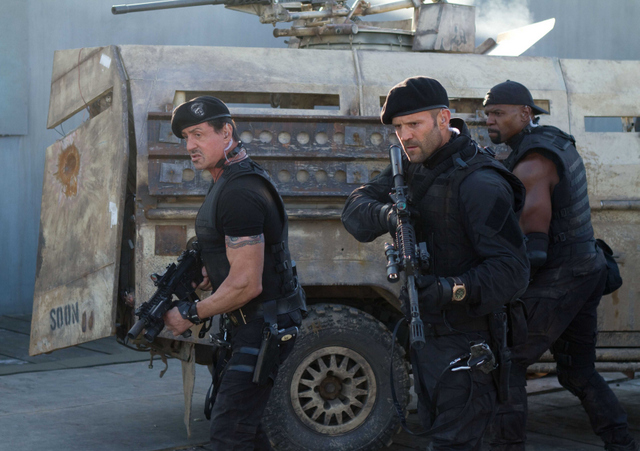 My biggest gripe is the all-too brief appearance of Li, whose screen time is noticeably brief. And as usual, I’m greedy for more 80s/90s star cameos, but there’s only so much camera time to pass around. I’ll have to just wait for The Expendables 3, which Stallone is already reportedly working on in recruiting new familiar old faces to join in on the fun for the next round.

Sure, some of the guys don’t move around as easily as in their heyday, but there’s an undeniable thrill of an action franchise unafraid of just providing a distracting bit of fun for the audience with a basic plot of good guys wanting to stop the bad buys. In that regard, this is one franchise I hope doesn’t become expendable anytime soon.