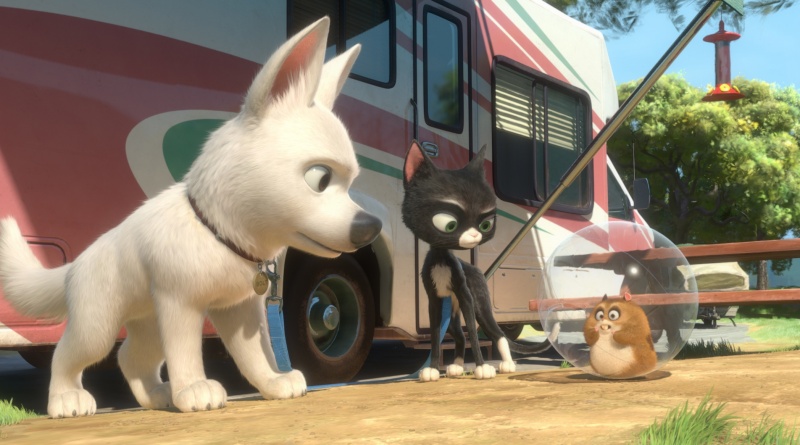 It seems every other week there’s another mediocre animated film released with the sole purpose of suckering in quality-entertainment starved families and thinly veiled attempts at selling toys and other merchandise. It’s rare when a film like Walt Disney’s Bolt comes along and restores some faith that there are some creative minds left in animated films that Pixar hasn’t added to its talent pool.

Bolt (John Travolta) is the star of the self-titled action show where audiences thrill to the adventures of the American White Shepherd and his person, Penny (Miley Cyrus) as she tries to rescue her father from the vile clutches of the evil Dr. Calico (Malcolm McDowell, Heroes).

Calico constantly fails in his efforts to kidnap Penny thanks in large part to Bolt’s astonishing superpowers. Bolt thinks the fictional world is his reality – an illusion the show’s production staff goes to great lengths to maintain to bring out a genuine performance from him.

In an effort to drum up ratings, the writers have Penny get captured in a cliffhanger episode.  But desperate to find his friend, Bolt escapes the studio and is stunned to learn his powers aren’t working.  Ah Bolt, reality bites sometimes, doesn’t it?

Disney deserves major kudos for resisting the urge to pack the film with A-listers to voice the characters, which all too often is distracting and takes away from the illusion of the animated movie. You see the Madagascar zebra on screen but when you hear it, you can’t help but see Chris Rock. In Bolt, the emphasis is where it should be – on the characters, not the actors voicing them.

Essman and Walton give lively performances that give Mittens and Rhino strong personalities and make them stand out above the normal sidekick supporting roles. Greg Germann is very funny in his role as Penny’s agent more concerned with getting Penny in the spotlight than Bolt’s well being. 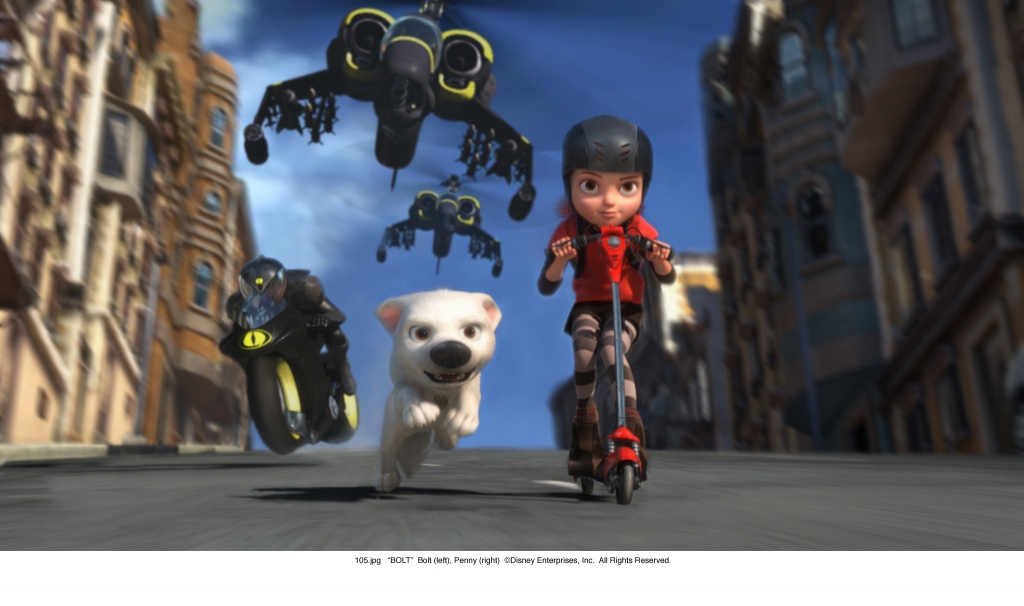 Human characters are animated in a caricature style to exaggerate their features and proportions making each one look unique. The animals’ texture looks as soft as real fur showing some real dedication to a more realistic and less plastic-like look, a common problem in cheaply-made CGI films.

Screenwriters Chris Williams and Dan Fogelman (Cars) even manage to work in a nice morale lesson for kids that they don’t have to have super powers to be a hero to be a good friend.

Bolt isn’t particularly radical but it’s a very cute, fun film that will likely have more than a few kids asking for a dog, cat and maybe even a hamster in a ball for the holidays.