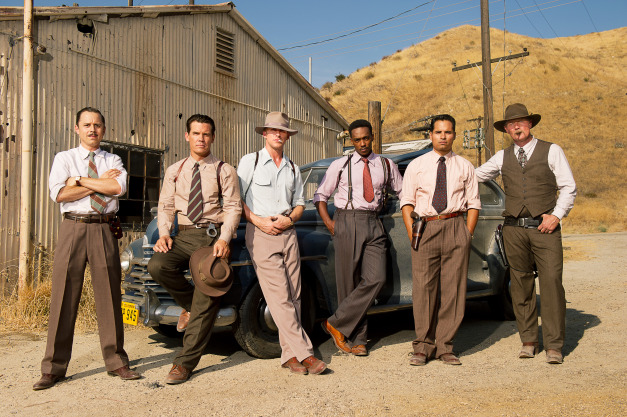 Bullet-ridden with clichés and a lousy script that wastes its talented cast, Gangster Squad, will have you wishing you remembered where you put your copy of Casino or The Untouchables.

Even the climatic fight scene occurs on a flight of steps just as it did in the 1987 classic starring Kevin Costner, Sean Connery and Robert De Niro. At least the film is ripping off/paying homage to some of the best gangster films. Just too bad it couldn’t join their ranks. 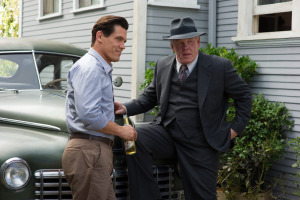 Set in the late 1940s and loosely based on actual events, the Los Angeles Police Department is fighting a losing battle against the Chicago mob’s insurgence in the City of Angeles. The biggest threat to the peace is would-be kingpin Mickey Cohen (an over-the-top Sean Penn in a bad makeup job) who has big plans for the area and isn’t afraid to eliminate any competition.

Cohen’s increasing reign of terror frustrates Sgt. John O’Mara, (Josh Brolin, Men In Black 3) a World War II vet turned police officer tired of turning a blind eye to the chaos around him. He yearns to make the city a better place for his pregnant wife, Connie (Mireille Enos) and future son. 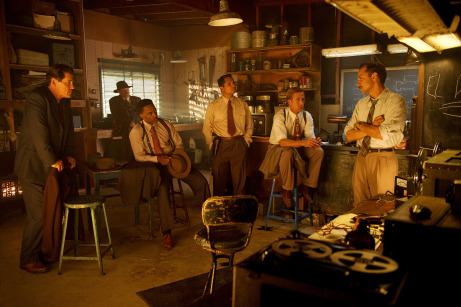 They’re soon joined by Jerry Wooters (Ryan Gosling), an officer who has an even more personal stake as he’s dating Cohen’s mistress, Grace (Emma Stone, The Amazing Spider-Man). Gosling gives Jerry a higher-pitched voice than his regular tone. It’s kinda odd, but I appreciated Gosling doing something to distinguish Jerry from his other characters.

Director Ruben Fleischer, who helmed the brilliant Zombieland, gets the style and mood down of a classic gangster film from the great wardrobe, the ever-present clouds of cigarette smoke and toe-tapping music, but he can’t settle on a tone.

The action scenes are in-your-face explosive and are the only glimpses of life in the film, but then he abruptly switches with some light scenes intended for big laughs. It’s too jokey for the violent, often brutal world the characters inhabit. 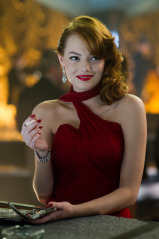 Debuting screenwriter Will Beall (Castle) doesn’t leave a mob movie cliché unused. Will anything happen to the plucky shoeshine kid who’s out well past bedtime? And the squad member who dotes on his family will be just fine, right?

Beall’s cast is far better than the stock, generic roles they’re stuck in and somehow he manages to make the typically vivacious Stone dull and unlikeable.

I’d have paid to just watch Mackie and Peña team up against mobsters. Brolin and Gosling get the bulk of the screen time, but can only do so much with the dialogue. Penn at least gets some good lines so his going overboard nearly works in the film’s context, but it still feels like a bit much.

Beall’s already been anointed the new “It Guy” for Warner Bros. as he’s attached as the writer for Logan’s Run, Lethal Weapon 5 and Warner’s potentially biggest blockbuster of the decade — Justice League.

Squad has a decided comic book team feel to it from the focused leader, brooding pretty boy, team genius, weapons expert and comic relief uniting to stop an over-the-top villain so maybe he just used Gangster Squad as a trial run?

Regardless, the best move is to grab your squad, find a comfy seat on the couch and re-watch some mob classics. “Gangster Squad” can sleep with the fishes.