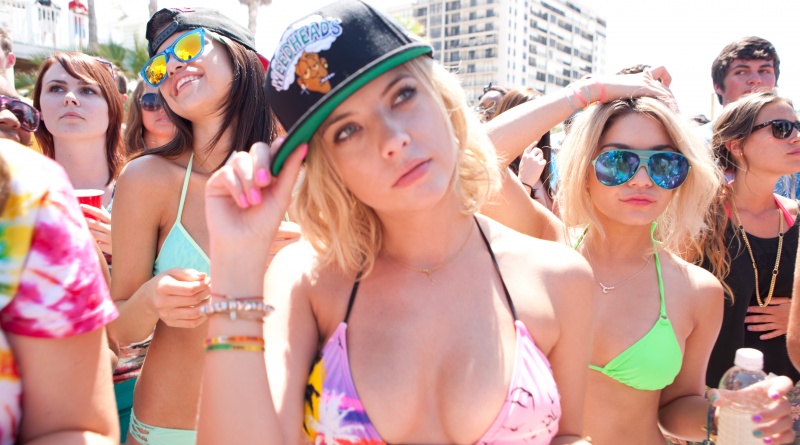 You already know if you’re gonna like Spring Breakers or find it something you’ll need a few showers to forget.

The trailers tell you everything you need to know. This isn’t a movie that has some hidden depth that will bring you from one side of the money-slanging, booty-banging fence to the other. You’d wish all movies were this honest in that regard.Lacking money to head to Florida and escape the doldrums of college life, Brit (Ashley Benson), Candy (Vanessa Hudgens) and Cotty (Rachel Korine) are desperate enough to rob a store to pay their way. 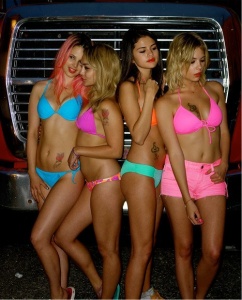 They bring along their prayer-group attending friend Faith (Selene Gomez) along for the ride and once in Miami, the girls enjoy the non-stop Spring Break party lifestyle overindulging on alcohol, drugs and their first real taste of freedom. Their hedonistic fun lands them in prison, only to be bailed out by a rapper/thug Alien (James Franco) — so nicknamed as he’s “out of this world.” 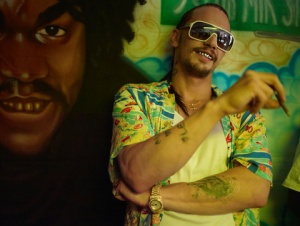 In Oz the Great and Powerful, I complained that Franco didn’t rise to the challenge of making that role his own. Maybe that’s because he gave his all here in a magnetic, uninhibited performance that he wholly embraces.

He’s the life of the Spring Breaker’s party and nearly makes the movie more than just an explosion of colors, kids behaving badly and a T&A spectacle. It’s easy to see how the sheltered girls become so fascinated with Alien’s spiel and fast-living lifestyle as Franco similarly hypnotizes the audience with an effort we should all file away and remember come award season.

I’m convinced Director/Writer Harmony Korine received an extra $50,000 per breast he was able to flash on screen and the dude should be a multimillionaire by now.

Korine tosses so many boobs on screen that it just became gratuitous and worse, made me just want to see them put some clothes on already. My teenage self can’t believe I wrote that. 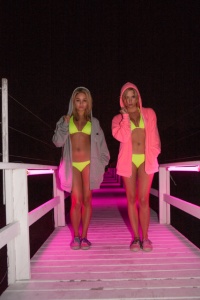 Korine employs a steady perv-cam where he shoots varying angles of his actors — from far too close to their mouths and lips to tight shots of their bikini tops and thongs. It’s a little unnerving and kinda creepy especially since he shoots his wife, Rachel, in the most degrading positions.

Korine can’t determine what kind of film he’s making. One is a shocking, unfiltered look at Spring Break life while the other is an artsy tumble down the rabbit hole where he continually experiments with different filters, gauzy effects, camera angles and chronological setup. I feel he could have made the latter work, but combined the two are a mess.

My biggest issue with the script is there’s no consequences for the girls. They run around like banshees tearing stuff up, robbing people and then becoming hardcore gangsters and there’s no reality check for them.

Spring Breakers is the kind of film that needs some sort of moral center or a “this is what could happen if you do this” message if for nothing else to not give some numbskull teenagers any bright ideas of imitating what they see in it. Even Tony Montana eventually had to deal with the repercussions from his actions in Scarface and Korine did a disservice to the audience in that regard, especially in the absurdly over the top ending.

Sure, maybe he’s doing some big female empowerment bit, but after objectifying them throughout the movie it’s kinda hard to take that seriously. 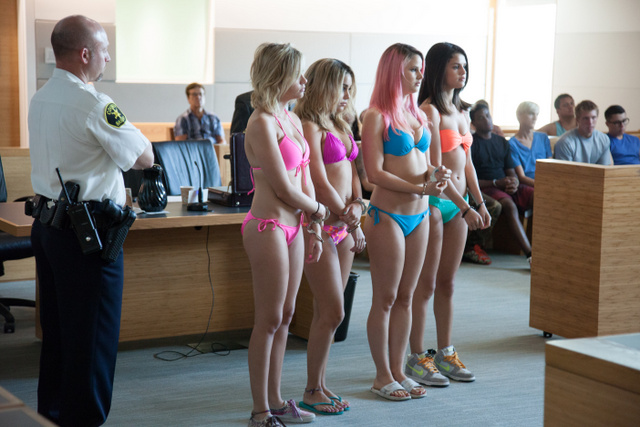 If you’re up for indulging in its insanity and sullying of Disney good girls Gomez and Hudgens, you’ll no doubt love Spring Breakers, but if not you may want to let this spring break pass you by.