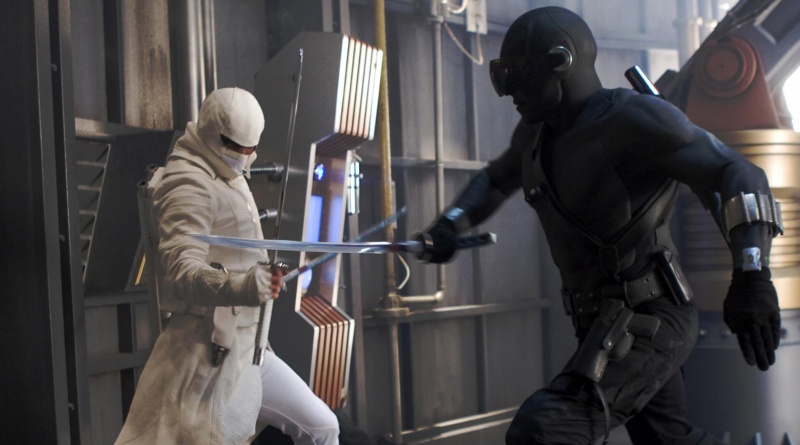 I’ve seen far worse movies than G.I. Joe: The Rise of Cobra, but very few have managed to leave me so irritated, frustrated and annoyed.

If Michael Bay did anything remotely right in 2009 it was making Transformers: Revenge of the Fallen such an unholy quivering piece of cinematic rubbish that anything by comparison seems not nearly as awful. But this gave it much closer competition than expected and without Bay’s debacle, ROC would be my solid lock for worse movie of the year. 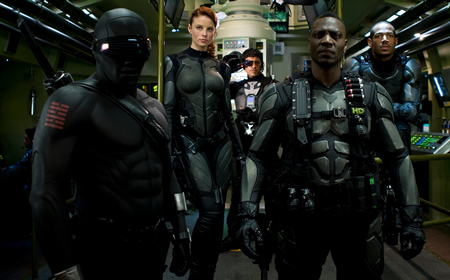 But in a lot of ways, ROC is a far greater insult to Joe fans than Bay’s “Bayification” of the Transformers universe. At least Bay got the core elements of the saga correct, but Director Stephen Sommers and company don’t seem to have any clue how to make a G.I. Joe movie any different than any generic action movie.

ROC plays out more like a direct to video Starship Troopers sequel than the fresh kickoff of a potential new franchise.

The biggest affront is when characters literally put on super-armored suits and run around like superheroes. I’m guessing Sommers failed to land the Iron Man gig and simply wanted to find a way to work out his men in armor dream. 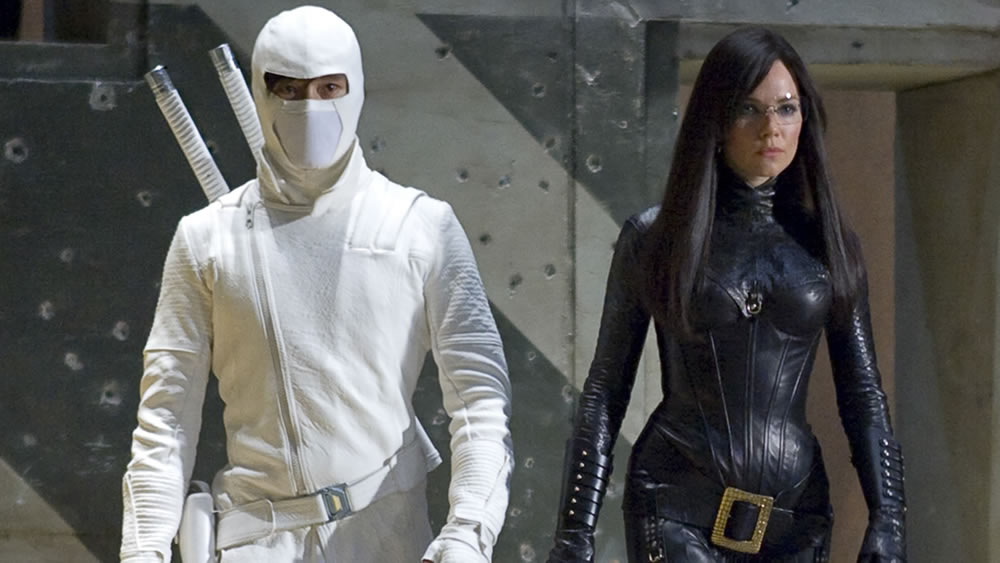 The film has three credited screenwriters, naturally as it’d be impossible for one writer to so completely screw up such an easy to translate into a film property.

Their butchering of the source material is baffling as there’s no reason to bother acquiring the license of a beloved property only to dump 97% of why people care about it in the first place other than to piss fans off. That’s the one area the film greatly exceeds expectations. 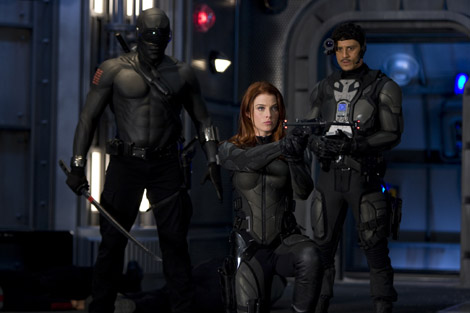 I’ve seen some terrible films based on licensed properties, but this is the worst as it almost seemed like the filmmakers spent more time determining how they could work around the license to make a completely different movie.

While transporting special equipment, U.S. soldiers Duke and Ripcord — an earnest Channing Tatum and miscast Marlon Wayans — are ambushed by a terrorist group led by The Baroness (a game, but ill-suited Sienna Miller) and Storm Shadow (Byung-hun Lee).

The screenwriters convoluted the Joe mythos further by having Duke and Baroness sharing a romantic past, Ripcord trying to woo Scarlett while Duke’s presumed killed in action pal, Rex (Joseph Gordon-Levitt) is in McCullen’s clutches and may could end up commanding all of McCullen’s forces and giving them a snake theme.

Ellen Mironjnick’s costume design is truly uninspired. From members running around in camouflage, football jerseys and even barefoot and bare-chested, the Joes’ attire has always helped distinguish the characters and gave them an extra dose of personality.

Mironjnick scraps that for the standard, boring everyone wears black mindset, which diminishes the coolness factor of Snake-Eyes — one of the few good guys who wore black before it became the comic-book movie standard.

Worse, Snake-Eyes has a goofy plastic muscle suit, leisure suit pants and lips — for the character who can’t talk…sigh. It looks like a cheap child’s Halloween costume instead of the more elaborate movie version.

I’ve always complained about comic book movies featuring characters without colorful costumes because that’s an important element to the comic, but with hack designers going all black leather is the easy and at this point expected way out. But with the Joes, these guys for the most part just wear regular clothes. How hard was that to screw up???

There’s a few glimmers of the actual Joe property audiences were likely expecting when the project was announced.

The ninja duel between Snake-Eyes and Storm Shadow is great and the two big fight scenes at the Joes’ and Cobra headquarters are sufficient big screen fun.

For a property where the cartoon characters could never hit anything, there’s a surprising amount of violence as characters get ninja stars thrown at their eyes and get gutted by knives and swords.

That’s not a bad thing in this case, but it made me wonder how much better this film could have been with less emphasis on making the Joes superheroes and more highly trained soldiers, which would have made for an excellent G.I. Joe movie.

Nichols comes the closest to realizing her character from the cartoon or comic book and of the cast, she, Park and Lee are the only essential carryovers for the hinted at sequel that I want absolutely no parts of it if Sommers is involved.

He represents a threat to G.I. Joe far more deadly than anything Cobra could conceive — a dull, passionless take on a property that any fan could have outdone with half the budget. Noooo Joe.