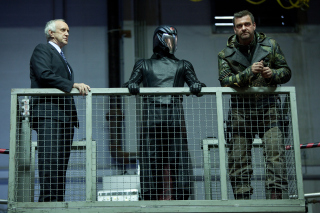 It was packed with all kinds of little references to the cartoon, comic book and even action figure line — Cobra uses the water moccasin — that fans would get without randomly tacking them on for no good reason.

Here’s some of the ones I noticed on my first viewing, but I’m sure there were others I missed.

It goes without saying that from here on are spoilers so if you haven’t seen the movie yet… don’t continue unless you don’t mind the spoilers.

Roadblock uses a 50 cal. Browning machine gun to stop Firefly. In the comics, the other Joes are impressed that he can carry it as the weapon is normally attached to tanks, not held by soldiers.

The ninja fight scene in the mountains contains no dialogue and is an homage to Hama’s iconic Silent Interlude story, which features Snake-Eyes trying to rescue Scarlett from Destro’s mountain fortress and fighting Storm Shadow and the red ninjas in a dialogue-less story.

Jinx’s original action figure had her clad in a red uniform, which was fine for the toy line, but her attire was very similar to the rogue red ninjas — members of the Arashikage clan who followed Storm Shadow in his service to Cobra. In the G.I. Joe Sigma Six cartoon, she was given yellow accents to differentiate her from the Joe enemy.

Flint and Lady Jaye are a couple in most Joe stories, even the cartoon. In their early interactions in the comic, Lady Jaye considers Flint to be a loud-mouthed and impulsive, which is briefly shown in the film although there is little indication whether the two are a couple in Retaliation beyond Jaye’s comfort level in changing clothes around him.

In G.I. Joe: The Movie, Jinx prefers fighting her opponents with a cloth covering her eyes, which “Retaliation” Jinx does while sparring with Snake-Eyes.

Despite appearances, Storm Shadow revealed to Snake-Eyes in issue #27 of the comic that he only joined Cobra to learn the identity of the man who assassinated his uncle and leader of the Arashikage clan, The Hard Master, hoping that by faithfully serving as Cobra Commander’s bodyguard that he would be entrusted with the assassin’s name.

Similar to the movie, Zartan is The Hard Master’s assassin (a story thread retained through most G.I. Joe continuity, including the animated film G.I. Joe: Resolute), but in the comic his goal was to kill Snake-Eyes for Cobra Commander. The Hard Master was showing Snake-Eyes a technique that could confuse an assailant by mimicking someone else down to their style of breath.

Jinx trained under The Blind Master in the comic book and carried on the tradition of Arashikage while Snake-Eyes fought with the Joes.

In the comic, Storm Shadow left when Cobra Commander ordered his son be strapped to the Brain Wave Scanner and didn’t learn Zartan killed The Hard Master until months later. Storm Shadow also fought in Vietnam with Snake-Eyes and Stalker and the trio frequently teamed up once reunited as Joes. Storm Shadow also joined the Joes in the toy line.

Zartan and Firefly bicker over their techniques, a common issue for Cobra Commander’s mercenaries in the cartoon and comic books.

After the Joes capture Cobra Commander, Storm Shadow stages an impossible rescue to free his leader. Firefly is dispatched to aid the rescue effort where he encounters Zartan in the Florida Everglades.

In issue #77, after most of the Joes are set up by shady government officials and labeled traitors, Roadblock escapes and goes into hiding to clear the team’s name aided by other Joes on the run, who are also aided by Jinx and Storm Shadow.

The President refers to one of his Cobra Secret Service operatives as Zandar, the name of Zartan’s brother.

Joe Colton teamed with the Joes in issue #86 of the comic book to prevent Cobra from acquiring an orbital pulse weapon system, similar to the Zeus weapon in the film. Unlike the movie Joes, the comic Joes have no idea the man that aids them was the original G.I. Joe until they offer him membership.

Major thanks to JMM’S G.I. Joe Comics Home Page for assistance with issue numbers and summaries.