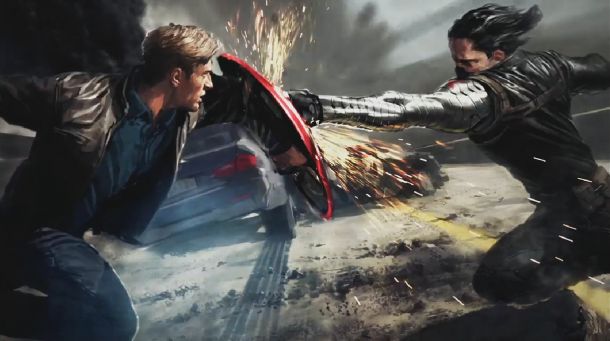 Those who picked up the Marvel: Phase 1 set (featuring Iron Man, Incredible Hulk, Iron Man 2, Thor and Captain America: The First Avenger) Tuesday received instructions and a code to be used on this site, which contained concept art, designs and pictures from Marvel: Phase 2 films:

Thor makes an early Phase 2 appearance instead of coming in on the last wave as he did for Phase 1. This time Chris Hemsworth returns as Thor has to contend with the Dark Elves, led by the evil Malekith (Christopher Eccleston), who are motivated to get revenge after Thor’s efforts with The Avengers.

This should be great and the storyline is very intriguing. I’m looking forward to this one more than I am Iron Man 3 just because the scope of this looks like it’s going to be so much different than the normal comic book movie. Adding in the Dark Elves opens up another realm of storytelling for the Thor movie realm that should provide him with another pesky opponent that hopefully will help audiences not wonder when Loki will be back.

Scarlett Johansson will be reprising her Black Widow, but no news if her frequent partner Hawkeye (Jeremy Renner) will be joining in on the fun. What is known is that Anthony Mackie joins the cast as Cap’s best friend, Sam Wilson, a.k.a. The Falcon.

In this sequel, Cap is tasked with confronting the equally adept super spy The Winter Soldier, who may have some connection to his past as a solider fighting in World War II against The Red Skull. Comic fans know exactly who The Winter Soldier is, but I won’t spoil it for the rest of you. Of the bunch, this is the one I’m most looking forward to seeing.

Chris Pratt and WWE alumn Dave ‘Batista’ Bautista lead a team that includes a living tree and a raccoon on a never-ending quest to protect the universe.

There’s a rumor that the team will be fighting or at least encountering Thanos, the villain who made a brief cameo in the memorable ending of Marvel’s The Avengers. Of all the films this is probably Marvel’s riskiest. Comic fans have long thrilled to the crazy interstellar adventures of Star-Lord, Gamora, Drax, Rocket Raccoon and Groot, but you have to wonder if mainstream movie audiences will buy into a movie where two of the main heroes are a talking raccoon and a three word tree. If they do, not just the sky, but the galaxy will be the limit for the Marvel Cinematic Universe.

If nothing else, having Director James Gunn so passionate about the project should definitely help.

Hank Pym discovers a formula that allows him to communicate with ants. This one is coming out after Avengers 2, so it’s likely that Pym’s adventure will kick off Phase 3 for the Marvel films. This has actually been the longest developing of the MCU films as Edgar Wright was working on this treatment of the pint-sized hero since before Robert Downey Jr. suited up as Iron Man.

Like Guardians, Ant-Man could prove a tough sell. If it doesn’t pan out, Marvel still gets credit for trying something different, but considering their track record, it’s probably a safer bet that against all odds, Ant-Man will connect with audiences and one of the founder Avengers will finally get his overdue big moment to shine in the spotlight. Now if Wasp and Giant Man will also make an appearance we’ll really be in business.