There’s been a lot of pseudo-suspense thrillers released this year, but none are as brilliant as Collateral, the latest from film heavyweights Tom Cruise, Jamie Foxx and Michael Mann. 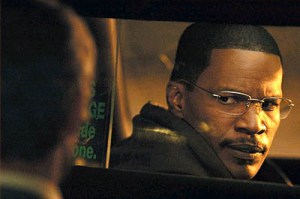 Foxx stars as Max, a cab driver who takes an unusual amount of pride in his work. His cab is immaculate and he takes the fastest route in getting to his destination. Max is honest and doesn’t need to run up fares.

For Max, customer service is the most important aspect of his work. His end game is building a clientele when he branches off and starts his own limousine service. Foxx is a magnetic performer, but he makes Max a very average guy. For more charismatic actors, dialing down can be difficult, but this performance puts Foxx’s versatility on full display.

), Max settles in for what he figures will be a slow night until he picks up Vincent (Tom Cruise) — a silver-haired, slick-talker with a deadly agenda. 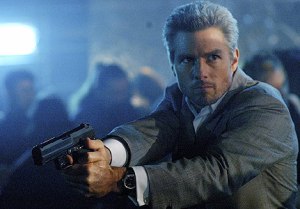 The dye job can’t magically age Cruise’s still youthful face, but it’s enough to give him a unique look. Cruise is dialed in as a snake charmer in the role, able to be relaxed and conversational one moment and then snap into a ruthless threat the next.

Impressed with Max’s professionalism, Vincent hires Max for the rest of the night, but it’s not until a body lands atop his cab does Max realize that Vincent isn’t making social calls.

) get on the case and try to determine the assassin’s identity and the victim’s connection to one another. 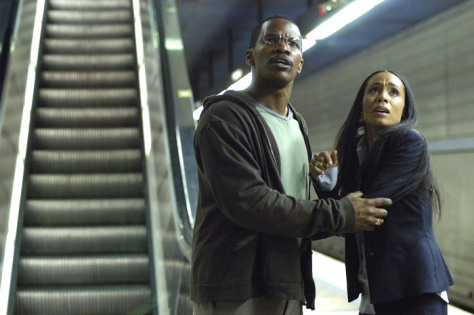 Stuart Beattie’s script is a winner with some gems for both Cruise and Foxx, whose chemistry would almost make this a buddy flick if Vincent was threatening to kill Max half the time.

After heroic stints in the Mission Impossible series, it’s a good change of pace for Cruise, who makes for a surprisingly effective villain.

Mann’s direction is cinematic artwork and he finds the perfect, streetlight-kissed mood for the film aided by a soundtrack featuring Miles Davis, The Roots and Paul Oakenford. 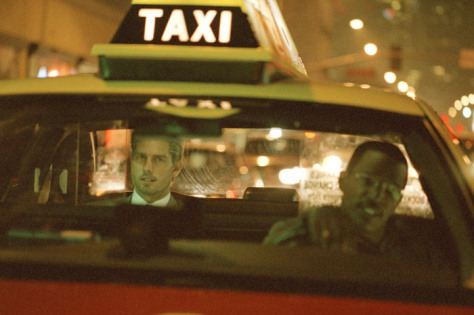 While the bulk of the film is conversational from Max’s cab, Mann smoothly works in the action scenes. It gives the viewer that sense of disruption from the norm as opposed to making the violence the accepted standard.

And Max, like most of us, isn’t much for heroics, but he finds his nerve and tries to prevent Vincent from completing his sinister agenda.

Collateral is the year’s best action thriller. With excellent performances from its two leads and Mann’s brilliant direction something as pedestrian as a taxi ride becomes a pulse-pounding thrill ride.