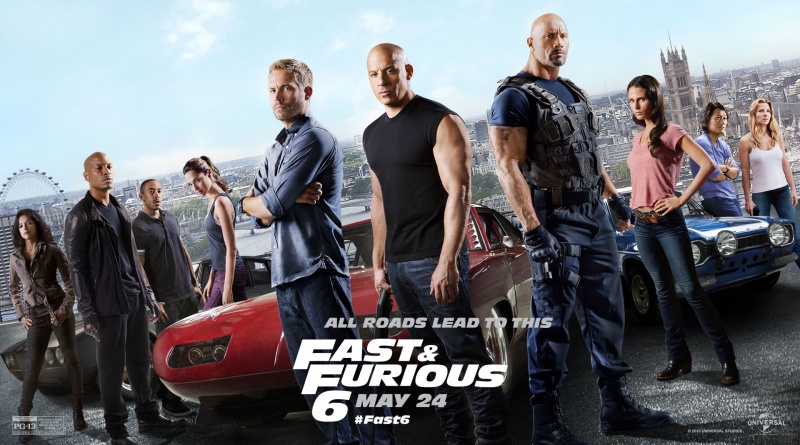 After a blockbuster-packed summer movie season that was rapidly plunging further and further into the category of “most depressingly disappointing summer movie season ever,” the summer’s first must-see film has arrived as Fast & Furious 6 shifts the series to a higher gear and easily leaves every other summer film choking on its exhaust. 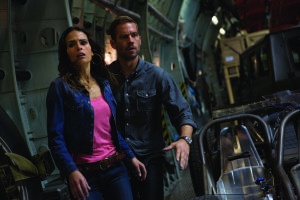 Amazingly for a franchise that’s in its sixth installment, the series just keeps finding new ways to top itself.

I thought that all but impossible after “the ode to everything great about blockbusters” that was Fast 5, but now there’s a new king of the road.

His team is close to getting the final component to assemble a dangerous weapon that would be worth billions of dollars on the black market. 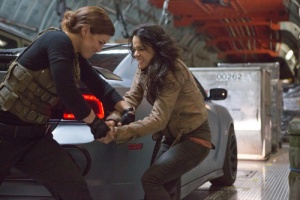 Only problem is now their efforts have attracted the attention of  Agent Hobbs (Dwayne Johnson, G.I. Joe: Retaliation) and allied with a new partner, Agent Riley (Gina Carano, Haywire), he’s in close pursuit. Johnson has been a tremendous addition to the cast and provides the ideal avenue to steer the franchise to high-stakes action beyond street racing.

To match Shaw on even terms, Hobbs seeks out Dominic Toretto (Vin Diesel).

Hobbs sells him on the job with the promise of pardons for his sister Mia (Jordana Brewster), brother-in-law Brian (Paul Walker) and his extended family — Han (Sung Kang, Bullet to the Head), Gisele (Gal Gadot), Roman (Tyrese Gibson) and Tej (Chris “Ludacris” Bridges).

Hobbs also has another incentive for Dom with the revelation that his presumed dead former flame, Letty (Michelle Rodriguez), is still alive and working with Shaw. 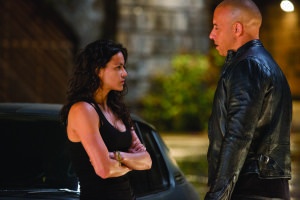 The trailers don’t even come close to preparing you for a legitimately epic thrill ride that will have you out of your chair cheering from start to finish. Screenwriter Chris Morgan, who’s handled the series since the third installment, The Fast and the Furious: Tokyo Drift, does a wonderful job juggling the characters and giving everyone a chance to shine while picking up story threads from the previous five entries.

Morgan’s attention to continuity is incredibly rewarding for longtime fans, but series newcomers will be completely lost. The actors’ chemistry is so natural now that it’s hard to imagine they aren’t the characters hanging out like an actual family.

Gibson continues to pack all of his scenes with big laughs and Kang remains the coolest man on screen. 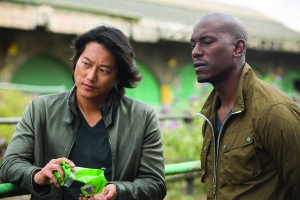 Lin and Morgan truly deliver everything fans could possibly want from this with heavy-hitting fistfights, edge of your seat racing sequences, vehicle warfare and action segments that are completely absurd, but you won’t care because it’s so awesome.  Best of all, Lin stages the action cleanly so you can see everything that’s going on.

There’s a point near the end that easily could have been a cliffhanger ending for most films, but Lin and Morgan decide not to leave the audience dangling and proceed to put together one of the most insane, spectacular action scene you’ll ever see.

This is Lin’s last film of the series after teaming with Morgan on the last four and arguably no director has left his franchise on such a high note. It’s almost to the point where I’m leery of someone else taking over the reins, especially when Lin doesn’t appear to be creatively maxed out yet as he keeps finding new ways to astonish the audience. 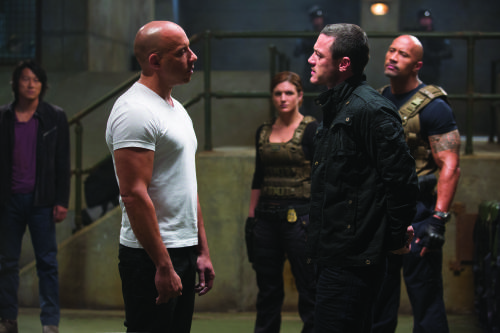 Make sure to stay through the end of the first string of credits for a teaser that wraps up some longstanding plot threads and introduces the next installment’s major new villain.

This is a franchise whose filmmakers know what their audience likes and delivers movies that they’ll love.

Fortunately, we don’t have to wait too long on the next edition as Furious 7 is slated to come out in 2014 and instantly becomes my most anticipated movie of 2014. But for now, I’ll just have to be satisfied watching this one about five more times in theaters.