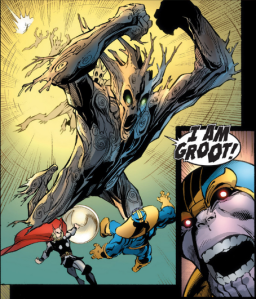 Proving I’m a better critic than movie prognosticator, Vin Diesel has confirmed that he will be voicing Groot and doing the motion capture work for Groot in Guardians of the Galaxy.

While talking with The Hollywood Reporter, Diesel said he originally met with Marvel Studios about playing another Marvel Comics character — a role that is still in the cards albeit not until Marvel Studios’ Phase 3 roll-out of films set for 2016 or 2017.

‘What can I say about Groot? I can say something about Marvel. I take my hat off to them for being so creative and thinking outside of the box,’ Diesel said. ‘With my schedule, it was almost impossible to imagine I could do anything immediate. I guess after they watched Iron Giant, or whatever, they came up with this idea of taking the strangest Marvel character — or the strangest Marvel character that’s ever hit film — and thought what I could do with that with motion capture and with my voice. Now it’s just up to my reps to allow that to happen.’

You’ll remember the first Diesel/Marvel talk started after Diesel posted a picture of himself standing in front of a copy of Avengers #2, prompting logical assumptions that he was in talks to appear in Avengers 2. Those plans seemed to be shelved once scheduling got in the way so if you ever wanted to find something to be upset about the Fast & Furious series you may finally have a reason.

But it sounds like Vin does still factor in to Marvel Studios’ future plans and it’s actually not too far off for them to be hard at work on Phase 3 projects.
Phase 2’s slate is underway with Thor: The Dark World in November, Captain America: The Winter Soldier on April 4 and Guardians of the Galaxy on Aug. 1 leading to The Avengers: Age of Ultron in 2015.
So what do you think? Is Vin Diesel on GOTG just to provide some extra star power to the film or are you looking forward to him saying one line over and over?
lylesmoviefiles