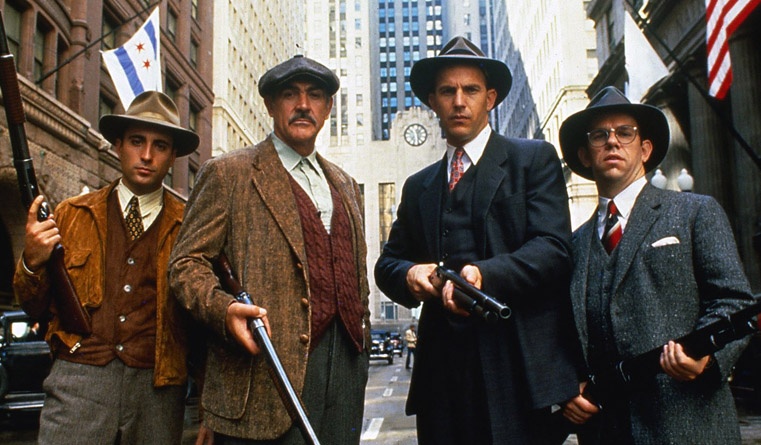 It seems like ever since Al Pacino uttered one of his signature lines in Scarface we’ve been fascinated with the bad guy. From anti-heroes, nasty guys with quick tempers to cannibalistic serial killers, there’s something we just can’t get enough of even while we know shouldn’t. And if they’re mob bad guys? Fuhgeddaboudit. We’re hooked in even more. Our love affair with the mob crime lord and their insatiable appetite for power is what makes The Untouchables all the more brilliant.

While he took us through the rise to power of Tony Montana in Scarface and the fall of Carlito Brigante in Carlito’s Way, Director Brian De Palma provided a different perspective with his 1987 classic — a mob movie that didn’t focus on the unpredictable charismatic lawbreakers, but the good guys attempting to bring them to justice. It’d been awhile since Robert Stack’s 1959-1963 The Untouchables TV series and audiences’ taste had grown a bit darker and De Palma attempted to prove it’s still okay to root for the good guys.

With prohibition in full swing during the Roaring 20s, alcohol is a highly-demanded commodity leading to an ever-increasingly brutal Chicago gang war. 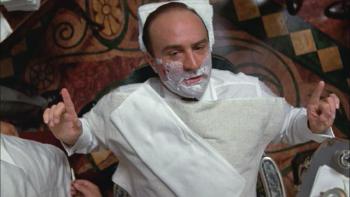 As police officers love their booze and staying alive, the gangs’ power continues to expand with none greater than crime lord Al Capone (The Family’s Robert De Niro, back when he amazed with every performance).

De Palma keeps Capone’s screen time limited to the point De Niro is making a glorified cameo, but that’s all he needs. In De Niro, De Palma has a perfectly-cast charismatic performer who can turn on a dime from being a jovial, likable guy to a savage brute. De Palma reinforces what we’ve come to expect from our cinematic gangsters as they bask in the high life of overindulgence from spacious hotel rooms, tailor-made suits and beautiful women — a stark contrast to the film’s protagonist.

Treasury agent Eliot Ness (Kevin Costner, Man of Steel) has just been given the go ahead to lead a special task force to bring Capone down. Ness is a straight-laced professional whose only fault is being too trusting and assuming everyone wants to see Capone taken down just as badly.

After a humiliating first mission, Ness is forced to rethink his strategy thanks to the advice of veteran beat officer, Jim Malone (Sean Connery, Dr. No).

Connery is so much fun to watch and he gives a well-deserved Best Supporting Actor Oscar-winning performance. He makes Malone the sensible mentor who has to teach Ness how to fight dirty enough to beat Capone. Costner is solid, if unremarkable, while Garcia merely hinted at his immense potential he’d reach ironically as a gangster in The Godfather: Part III. 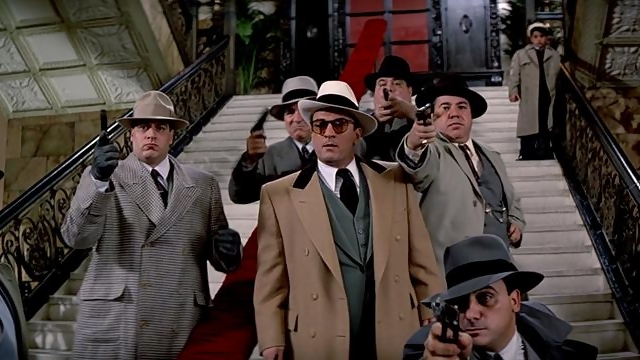 Few mob movies have been so beautifully shot as Untouchables. De Palma sets up some nontraditional angles like a lingering top down view or a point of view perspective that makes this unlike any other mob film.

That’s even before you consider one of the film’s major action scenes that sends The Untouchables to the Canadian border allowing De Palma the opportunity to stage a western in a mob movie. It’s almost too bizarre a combination to imagine, but he smoothly pulls it off without derailing the story. And the iconic final action scene at Chicago’s Union Station is a study in building up a big moment and expertly delivering on it.

Marilyn Vance’s costumes and Hal Gausman’s set designs really add to the clashing dynamic of Capone’s opulence versus the gritty world Ness is forced to endure. 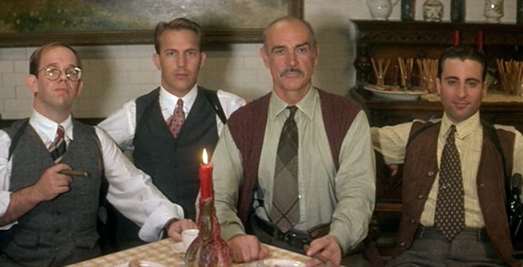 David Mamet’s script is jam-packed with heavily quoted lines and memorable bits, but I wish the final confrontation with Ness and Capone didn’t end with such a corny exchange. It’s begging for a great parting line similar to Ness’s encounter with Capone’s top henchman, Frank Nitti (Billy Drago), but Mamet doesn’t quite deliver on the film’s pivotal moment.

As Gangster Squad proved, telling a mob movie from the cop perspective isn’t easy. And it was completely unnecessary since the best cop/mob movie remains decidedly untouchable.