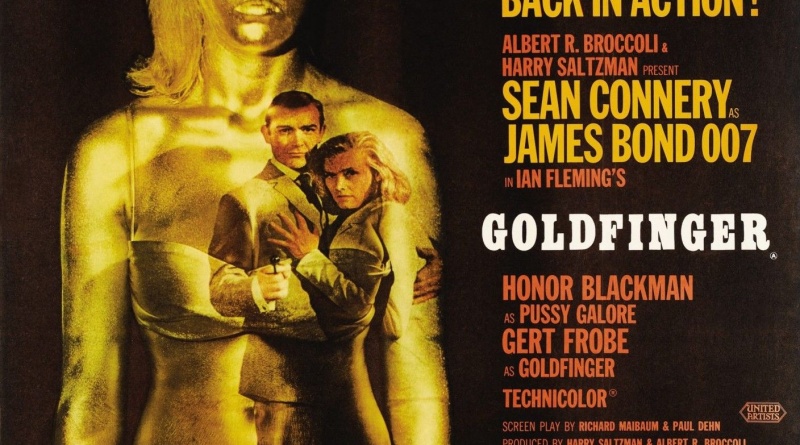 While Dr. No and From Russia With Love were excellent spy movies, Goldfinger is the definitive James Bond movie as it’s packed with everything that’s made the franchise so endearing.

Bond quickly gets on Goldfinger’s bad side by ruining his card game and charming away his female companion, Jill Masterston (Shirley Eaton). Those two brash moves don’t sit particularly well with Goldfinger and he memorably deals with both offenders.

Now with a personal stake in stopping Goldfinger, Bond sets off to stop the villain before he can unleash his sinister plan, but not even the world’s greatest secret agent can comprehend Goldfinger’s true agenda.

By his third outing in the title role, Sean Connery had a more relaxed swagger to him and he seems to be more at ease and able to have some fun and this is the film where Connery has his finest 007 performance and establishes the measuring stick for all the actors who would take on the role in the future.

Beyond delivering the series’ second most quoted line (even if Michael Collins actually dubbed his voice for the film), Fröbe makes Goldfinger such a memorable villain for being such a dastardly bad guy. Cheating at cards and golf is just as sensible as invading Fort Knox for him.

Unlike the latter day dashing villains, Fröbe plays Goldfinger as anything but, being slightly uncomfortable and seemingly always uneasy — the exact opposite of Bond.

But Goldfinger doesn’t have to be too worried since he has tough backup in the form of bodyguard Oddjob (a terrific Harold Sakata), whose razor top-hat made him the first great Bond villain henchman with a gimmick, which quickly became a requirement for future main goons.

Then there’s Shirley Bassey’s classic Bond theme, which is easily one of the series’ Top 5. Just try not to stop humming it after finishing the film.

Director Guy Hamilton took the series reins from Terence Young and the difference in tone is easily apparent. Young stuck to a more traditional, tense action style while Hamilton brings a little flair and some punch no one realized was missing until his turn behind the camera. Hamilton packs the film full of fantastic touches such as the Fort Knox air raid, lasers and the souped-up Aston Martin complete with machine guns, tire shredder and ejector seat.

While the first two films had Bond traveling to Jamaica, Italy and ‘Russia,’ his international travel is limited this time to Switzerland and Kentucky — not quite a plush destination spot for most moviegoers. Hamilton did shoot one sequence in Miami, but it’s one of the few scenes that dates the film as just one actor is clearly on location while the rest are blue-screened in.

Blackman was a welcome addition to the film as Bond was close to becoming too chauvinistic and Pussy Galore definitely isn’t Bond’s usual hot, but brainless companion.

The film’s final act fully raises the stakes for the franchise and really delivers a satisfying conclusion and a fitting fate for Bond’s most ingenious villain yet.

For 007 fans or action adventure/spy movie fans in general, it really doesn’t get much better than Goldfinger, a tremendous blockbuster that entertains on every level. If you only watch one Bond film, this should be your first choice.