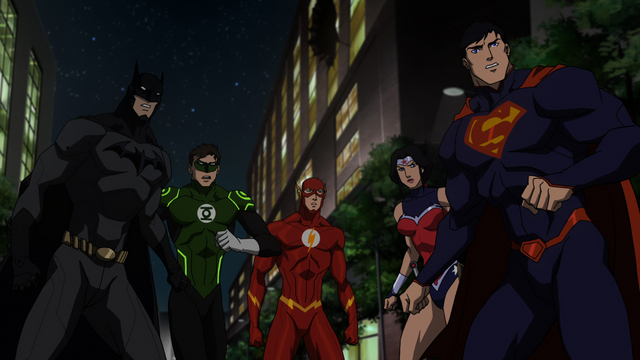 Perhaps it was inevitable. After all, nothing lasts forever, but Justice League: War marks the first truly disappointing Warner Bros. Animated production.

If it were a Marvel Comics movie, War probably wouldn’t be so bad, but Warner Bros. animated fans have come to expect a supremely high standard of excellence from the films featuring the characters from the DC Comics Universe and War just doesn’t measure up.

Even worse for DC Comics and WBA, War is the first movie to focus on the new DC Universe, the company-wide initiative intended to connect with a new generation of readers unburdened with decades of continuity. I’ll debate the merits of that decision later, but War won’t sway longtime fans holding out hope for the return of ‘their’ DC Universe and likely won’t win any new fans wondering why the heroes are such obnoxious, foul-mouthed tools.

The 79-minute film is based on the six-issue storyline Origin, the popular relaunch of the new Justice League by revered comic creators Geoff Johns and Jim Lee.

Batman (Jason O’Mara, In a World) and Green Lantern (Justin Kirk) team up to stop an alien from detonating a bomb in Gotham City. The two mismatched heroes are barely able to set aside their differences as they encounter other heroes — Superman (Alan Tudyk, Serenity), Wonder Woman (Michelle Monaghan), Cyborg (Shemar Moore), The Flash (Christopher Gorham) and Shazam (Sean Astin) — who are also trying to stop the alien invaders and their leader, Darkseid (Steve Blum).

Jay Oliva, the director of some of the more acclaimed DC animated films Justice League: The Flashpoint Paradox and The Dark Knight Returns, helms the production and again he stages complex, yet easy to follow, action scenes.

The character designs are fine although it would have been a welcome bonus to see something more closely resembling Lee’s dynamic artwork.

Damning the film to mediocrity however is the poor script by writer Heath Corson, on his first Warner Bros. Animated assignment.

While Johns wrote the group a bit more edgy and not so super friendly with one another, Corson lacks any sense of subtlety and instead simply makes them annoying.

Shazam is the most grating and obnoxious character since he’s redundant on two fronts as the team’s other strongman and secondary impulsive hothead. It also doesn’t help that Corson, a writer for the teen spy drama Aim High, has a terrible grasp on how contemporary teens talk (here’s a hint, they haven’t referred to anything as ‘the bomb’ since the early 2000s) making Shazam’s insertion on the team in place of Aquaman all the more foolhardy.

Wonder Woman is portrayed as a ditz who appears ready to pounce on Superman the moment they meet. It’s ironic that Wonder Woman’s outfit was changed so audiences would take her more seriously and War offers such an insulting take on the character.

Corson goes overboard making Green Lantern the comic relief seemingly confusing GL’s fearlessness with being brainless comic relief. Superman and Cyborg are mere afterthoughts while only Flash and Batman coming across as likable.

In a first for any DC animated effort, the film feels too long. The constant barrage of fights is fun for awhile, but there’s little substance to this story to sustain its run-time and fight fatigue sets in well before the climactic battle. The whole aliens invade Earth only to be stopped by a team of superheroes plot kinda being played out at this point.

There’s a mid credit scene that teases the next Justice League film and hopefully by the time it arrives, the kinks will be worked out in this portrayal of the new DC Universe. Otherwise Justice League War will mark the turning point of the downward spiral of the once consistently excellent DC Comics home video product.