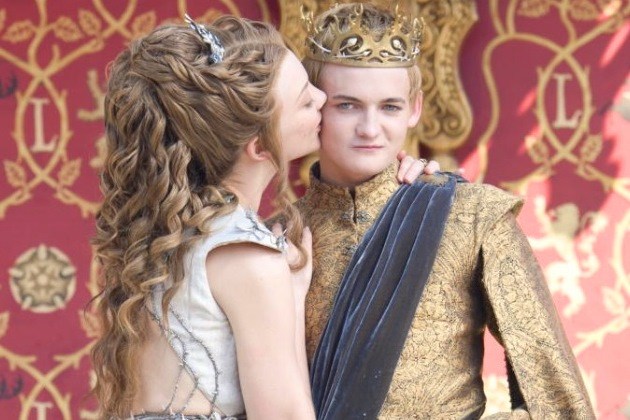 I called it quits on Game of Thrones following the soul-crushing, all hope is lost conclusion of last season’s Red Wedding. I was tired of watching the noble, good guys always getting one-upped by the vile bad guys and otherwise betrayed leading to some horrific tragedy.

I’m old fashioned with my entertainment. I want the guys who have character, values and some sense of decency to eventually emerge triumphant — not have their pet’s head sewn atop their bodies. If I wanted to watch the bad guys win all the time I’d pay more attention to politics and corporate America. But some of my Facebook friends managed to convince me to stick with it for just a little bit longer. And I’m glad I did because in “The Lion and The Rose” featurng King Joffrey’s wedding to Margaery Tyrell, the bad guys were finally going to get their just desserts. Pun firmly intended. There’s SPOILERS inside….

I wish this Stannis Baratheon subplot would actually go somewhere. I feel like he’s been spinning his wheels ever since the failed second season attack.

I’m finding myself very conflicted about feeling sympathetic towards Jaime now, which is weird because this joker started the series off hooking up with his sister and crippling little Bran Stark. I blame Nikolaj Coster-Waldau for making Jaime a character with tremendous depth and one not as easily labeled a “good” or “bad guy.”

There’s some shades of grey with every character up to this point, but Ramsay (Iwan Rheon) is just a truly awful excuse for a person. I’m hoping Ramsay isn’t long for the series, but he may have to be around for awhile now to fill the show’s evil bastard quota.

For all the raving about Matthew McConaughey and Woody Harrelson on “True Detective,” Peter Dinklage reminded us that he has been consistently bringing the awesome acting for four years now and this episode was one of his best.

From trying to cheer up crippled brother Jamie, painfully breaking up with Shae, barely maintaining his composure as King Joffrey attempts to humiliate him at every turn to his realization of his new fate, Dinklage was masterful covering Tyrion’s emotions and firmly cemented his status as one of the series’ few characters you can root for without reservation.

In my many years of TV viewing, I doubt I’ve been more satisfied with a villain’s death than Joffrey’s. I could have cared less if it was one of those Stark kids, Jon Snow, Tyrion or particularly strong pigeon at the rate he was going off in this episode. This petulant terror has been a nightmare for so many characters since Season 1 and if ever I wanted to leap through my TV screen to go after a character it would have been when Joffrey bragged that he would imagine he was using his new sword to cut off Ned Stark’s head again. I’m not sure if it was for his gall in saying that or the fact that he’s a sniveling liar since he didn’t actually cut Ned’s head off because he was too much of a punk to do it himself!!! Back to regular breathing…

Joffrey was on a roll. All eyes were on him and he was acting like any power-mad king or 13-year-old bully, which is doubly accurate in this case. When he wasn’t dismissively throwing gold at performers or humiliating Tyrion he was not too slyly embarrassing his former bride-to-be Sansa and his bride with a play that crudely mocked both their brothers.

This was Joffrey at his absolute worse and as he breathed his last breath — thankfully in just as ugly a vicious a manner as he’d been to all the inhabitants of the kingdom since his ascent to the Iron Throne — there was a sense that finally, finally the tide is beginning to turn against the Lannisters in a meaningful, impactful way. And I absolutely cannot wait for next Sunday’s episode!

9 thoughts on “Game of Thrones The Lion and The Rose S4 Ep.2”