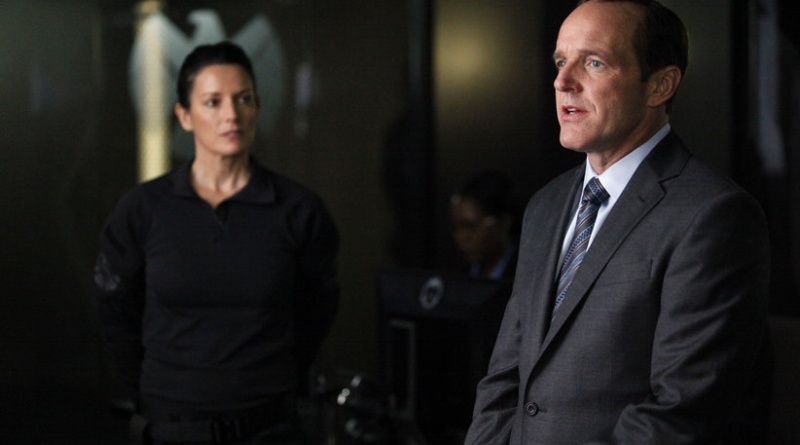 To be honest, I was a bit worried that last week’s stellar episode of “Marvel’s Agents of S.H.I.E.L.D.” was going to be a bit of a fluke. An excellent tie-in to “Captain America: The Winter Soldier” and nothing more than a return to status quo.

But if last night’s episode, “Providence,” is any indication, then the series has gotten over its early stumbles and is now cruising along the road to weekly must-watch status. That’s a pretty major turnaround from a show that you could skip weeks at a time and not miss any significant developments.

The episode starts off with the traitor Ward (Brett Dalton) springing Raina (Ruth Negga) from The Fridge and introducing her to Garrett (Bill Paxton), the man she only knew as The Clairvoyant. The character dynamic for the show’s Hydra inner circle are intriguing with Garrett every bit the laid back charismatic figure he was with S.H.I.E.L.D. Ward still has some attachment to Coulson’s crew, particularly Skye, but sees Garrett as a father figure more than a fellow agent in a refreshing bit of loyalty for a villain. Raina, meanwhile, is still trying to get in everybody’s heads.

Back at The Hub, Agent Coulson (Clark Gregg) is rallying the remnants of S.H.I.E.L.D. when longtime Hulk sparring partner Col. Glenn Talbot (Adrian Pasdar) comes a calling to check up on things. Coulson isn’t buying the check-up call and wants his team out of there ASAP or get arrested. As a huge fan of his work on “Heroes,” I’m ecstatic that Pasdar is joining the cast and it seems like he will be S.H.I.E.L.D.’s equivalent to Tommy Lee Jones in “The Fugitive,” doggedly pursuing our heroes at every turn. And I like actually the build up to actually making the Marvel spy agency a secret organization again.

In what’s become a fun staple of the show, we get another nod to “Empire Strikes Back” with Fitz (Ian De Caestecker) and Simmons (Elizabeth Henstridge)having a minor mishap trying to get the plane rolling. May (Ming-Na Wen) is still on Coulson’s bad side while Skye (Chloe Bennett) has become his Maria Hill of sorts.

Gregg has always been the glue of the show, no matter how much the creators wanted it to be Skye, and this new storyline marks a welcome return to the take charge, confident Coulson we were introduced to in “Iron Man” and “Thor.” Granted, the whole come back from the dead thing understandably left him rattled and searching for answers, but the show is all the better after moving past that subplot.

While some S.H.I.E.L.D. members are content to be questioned/jailed by Talbot, Tripp (B.J. Britt) wants to officially join up with Coulson’s team. Coulson is understandably leery of letting on board another potential traitor until Simmons convinces him otherwise. Tripp > Ward so this episode is hitting all the right marks for me so far. Garrett and Ward raid The Fridge for more confiscated S.H.I.E.L.D. tech and to unleash some bad guys for Coulson to handle. That’s a much more organic way to have the nuisance of the week storyline that what we had previously.

To effectively stay off the grid, Coulson has Skye retrieve everyone’s badges, but his is lighting up with coordinates. He’s convinced it’s a message from Nick Fury and sets course to learn the plan from his presumed dead boss.

Given the effects heavy run of episodes we’ve gotten in the last few weeks I’m willing to cut the show some budget breaks here and there, but the snowy mountains set looked more like what I’d expect from a sitcom than a fairly expensive TV show.

With no S.H.I.E.L.D. tech in sight, the team starts questioning Coulson’s fitness to lead. Gregg then delivers the best bit of acting in the show so far as Coulson gives an impassioned plea to his team, full of raw emotion unlike his normal in firm control of his feelings. And just when it seems like his hope is misplaced, a S.H.I.E.L.D. sentry pops up and the team meets Agent Eric Koenig (Patton Oswalt). Koenig instantly vaults ahead of Fitz as the show’s best geek as he enthusiastically welcomes Coulson while saying he’s been playing “Call of Duty” with his brother. Side note: Coulson is also an avid player … until recently.

Koenig pulls Coulson aside and thankfully tells him that Fury is still alive so that doesn’t drag out for the end of the season. Raina tells Garrett that Skye has protected the file drive so only she can access it (smart move). Garrett goes all “Scream” on Ward so he can look like he went through a battle when he reunites with the others at the mountaintop. Skye’s thrilled to see him and can’t wait to have that drink with him. Fortunately the teaser for next week’s episode reveals that Ward won’t be playing nice for too long — a very wise move by the show runners since it’s never good to have the audience smarter than the characters for an extended period of time.

So for a second week in a row, the show has been excellent and with some movement on the Ward/S.H.I.E.L.D. subplot next week looks like it’ll be another must-see. And hopefully, I’ll have that recap up a bit faster than this one.