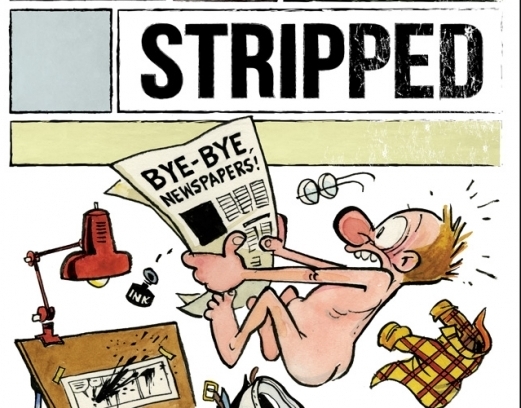 Every bit as charming and pleasant as a read through your favorite Sunday morning full-color treat, Stripped is a very entertaining look at the glorious past, modern struggles and resurgence of cartoonists. 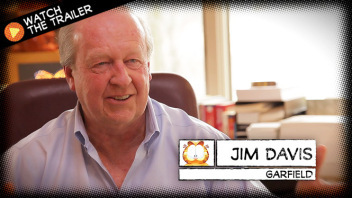 Five minutes into the documentary and it’s clear that directors/writers Dave Kellett and Frederick Schroeder are tackling the kind of passion project that most of us would envy. After all, they’re talking to the creators behind some of the most popular comic strips in the history of the medium such as Mort Walker (Beetle Bailey), Jim Davis (Garfield) Lynn Johnston (For Better of For Worse) and Greg Evans (Luann).

Not to mention introducing a broader audience to the talented creators of today’s popular comics like Ryan North (“Dinosaur Comics”), Kate Beaton (Hark, A Vagrant!) and Stephan Pastis (Pearls Before Swine).

The directors accomplish a major coup and get famed recluse Bill Watterson, creator of the beloved Calvin & Hobbes, to agree to participate in an audio interview as well as contribute original art to the project. 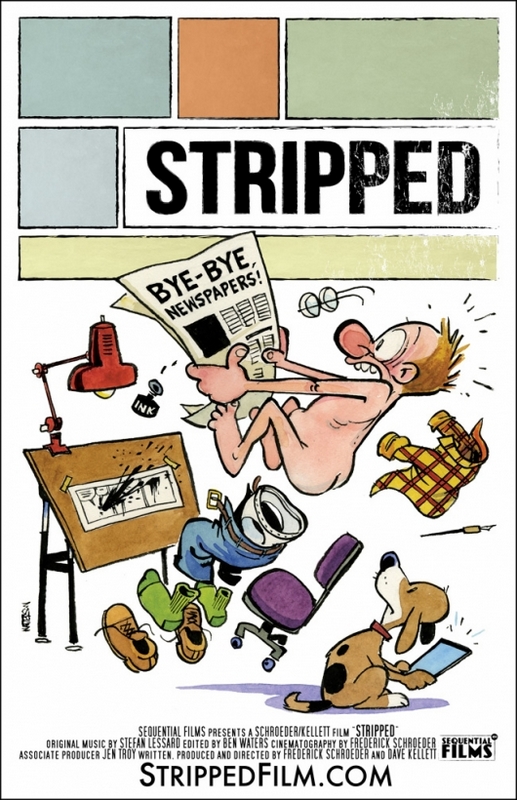 Like its subject matter, the film starts off light and breezy. The cartoonists are natural storytellers and very engaging. There’s a welcome lack of cynicism and resentment from the cartoonists, who prove just as endearing as their creations.

The project could have focused on four or five cartoonists (70 were featured) and been just as entertaining. Kellett and Schroeder must have a ton of great material that couldn’t make the final cut, but hopefully in the future, an extended edition with more interviews will be released.

My only complaint was I wanted more than the 85 minutes we got and a few unnecessary curse words since it’s otherwise perfectly suited for all ages. [Edit: On the Stripped website, the DVD includes a censored version for children and a deluxe version with interviews that range from 37 minutes to 2 hours so minor gripes are addressed]

We’re shown the Golden Age of cartoons where cartoonists like Mell Lazarus (Momma) are celebrities frequently appearing in radio, television and even commercials. Cartoonists share the challenge of breaking through, getting their work syndicated to the difficulty of meeting deadlines and the constant pressure of delivering that perfect punch line. Sure anyone could come up with a good gag once or twice a week, but to do it daily for decades? It’s not for everyone. 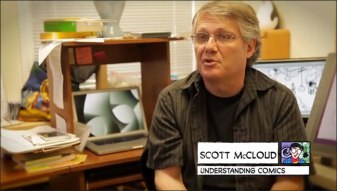 (Foxtrot) to be discovered. It’s a sobering sequence as the cartoonists ponder the long-time viability of what just nine years ago was considered the pinnacle of their profession.

Kellett and Schroeder lighten the mood back with the film’s most inspired segment set like a video game explains how the Internet, in essence, saved the modern cartoonist by eliminating the middleman and providing cartoons directly to audiences.

It’s fascinating listening to the established guard discussing the future of web comics. Some like Johnson and Davis are thrilled at the boundless horizons available while others like Evans fear it will devalue their work even as they lament the lack of opportunities for future cartoonists.

Kellett and Schroeder don’t ask viewers to pick a side, but just from the sheer number of talented cartoonists who have an avenue to share their work as opposed to winning the syndication lottery, it seems clear that the online route was a godsend to creators. 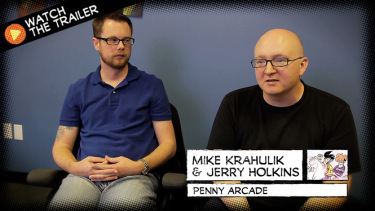 The filmmakers themselves also value the ability to reach audiences online as their project was funded via Kickstarter. That’s more than a little depressing when you consider how many truly awful films big studios foolishly blow millions on, yet Stripped was only made possible via crowd-funding.

If your first instinct after grabbing the newspaper ever was to reach for the comics section, Stripped is absolutely essential viewing. It’s a fitting, loving tribute to the cartoonists that similarly have had us smiling and laughing for so many years ago with the hopeful promise that the best is yet to come.