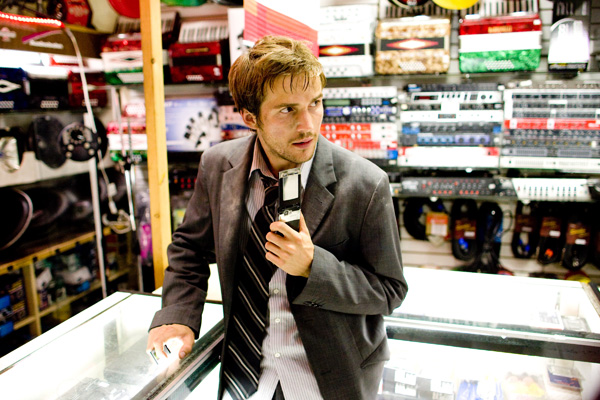 Cloverfield may just be my all-time favorite monster movie. It’s smart, scary and features a creative twist on the genre thanks to its unique found-film perspective.

The filmmakers, including producer J.J. Abrams, were cutting edge and quickly embraced the possibilities of viral marketing by creating MySpace pages for the characters and random video postings leading to the film’s release.

A brief warning kicks off the film that the following video is the property of the U.S. government that details incidents in the area formerly known as Central Park clearly foreshadowing that things have not exactly gone well.

We flash back to April 27 where friends Rob (Michael Stahl-David) and Beth (Odette Annable) have taken their relationship beyond the platonic stage. After a night together they plan a trip to Coney Island.

The video jarringly skips to May 22 and now Rob’s brother, Jason (Mike Vogel) is using the camera to film a surprise party that he and his girlfriend, Lily (Jessica Lucas, That Awkward Moment), are throwing for Rob, who is leaving for a new job in Japan the next morning.

Jason quickly tires of being the cameraman and pawns it off on their friend, Hud (T.J. Miller, She’s Out of My League), who serves as our narrator through the remainder of the film.

Since the initial video clip, Rob and Beth have fallen out. At the party, they get into an argument that sends Beth fuming back to her apartment. Jason and Hud try to console Rob, but he’s angry at himself for lashing out at the woman he loves.

But before he can do anything about it, an earthquake hits, followed by a power outage and the frightened populace soon discover that a towering monster has invaded the city.

Rob gets a message that Beth is trapped in her apartment and he pleads with his friends and Hud’s crush, Marlena (Lizzy Caplan, Bachelorette), to help him save her even as the city crumbles in the monster’s path of destruction.

Screenwriter Drew Goddard (Lost) writes the characters just like you could envision yourself in the same setting. They’re not action heroes and what they see terrifies them, but for Beth’s sake they keep moving forward. Hud’s running commentary is also entertaining and Miller steals the film despite rarely being in front of the camera. Caplan remains consistently solid and Lucas gets a welcome significant role. 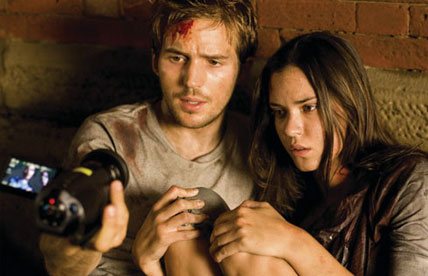 And without any big name stars there’s a welcome air of unpredictability so no character is ever truly safe. At any moment the unexpected can happen. Interspersed through the film are random clips of Rob and Beth’s date at Coney Island, providing an ironic glimpse of normal life as the characters fight for their lives.

Director Matt Reeves stages one of the best found footage films you’ll see. Moreso than any other film in the genre, Reeves makes the audience feel like they’re taking part in the action not passively observing characters through the lens of a distracting camcorder. You feel like you’re there as the characters frantically make their way to Beth and you’ll want to duck whenever some new terror comes out of nowhere.

Reeves doesn’t bother setting up fake thrills. With a brisk 85 min. — the exact length of the camcorder’s videotape — he goes straight for the action and there’s some craziness lurking behind every potential threat, which also helps to keep you on edge.

The actual monster rarely appears on screen, but Reeves doesn’t set up the film for a massive monster payoff scene, this is all about survival and is the closest to a survival horror style video game that’s come out of Hollywood yet. Be on the lookout for quick shot-outs to other monster movies as well.

Cloverfield isn’t the typical monster movie and it’s all the more exceptional for approaching the genre from a different perspective.