Word on the (Internet) streets is Warner Bros. will announce its full slate of movies featuring the DC Comics characters at San Diego Comic Con. The move will finally put WB in position to pick up the gauntlet Marvel Studios threw down — en route to making their films a billion-dollar franchise — with a stacked lineup of seven movies scheduled through 2018.

I was frustrated with WB backing out of the 2015 showdown with “The Avengers: Age of Ultron” and every announcement of “Batman vs. Superman: Dawn of Justice” had me feeling like WB was just trying to play catch up with Marvel Studios. Now? It kinda looks like the studio has a solid plan in place and if nothing else finally seems to embracing the almost easy money of investing in its comic book movie division. Here’s a breakdown of my thoughts on the rumored plans.

One of the few films we actually were aware was coming. Zack Snyder brings Ben Affleck’s Batman to his “Man of Steel” universe where the two will clash before presumably uniting against a larger foe. This is supposed to be one of the building blocks leading up to the most anticipated film of the slate, “Justice League.”

This has been a project long discussed to the point that Dwayne “The Rock” Johnson was rumored to be cast as Shazam/Captain Marvel’s arch-enemy Black Adam. The story of a boy who becomes a superman with the youth’s mentality is a great premise.

Last week I mentioned that WB should start recruiting disgruntled Marvel Studios talent to its films and I can’t think of a better fit for this than the former “Ant-Man” director Edgar Wright, who could have fun with a character who doesn’t have to be too serious.

Definitely the most intriguing of all the films. Based off of Neil Gaiman’s iconic character, this is less superhero and more fantasy epic as it follows Dream, the ruler of dreams and his siblings, The Endless.

I’m not exactly sure how well this will translate to a film and may be another “Watchmen” where it’s a great comic, but can only be a decent movie if it sticks too close to its source material.

This is the one everyone is waiting on and with three years to ensure that it’s built up correctly, maybe WB’s superteam will in fact be able to rival “The Avengers” in terms of box office dominance?

Aquaman is slated to join the team, which at this rate, we can assume will be Superman, Batman, Wonder Woman, Cyborg, Flash and Green Lantern. In other words, the exact lineup of the New 52 team.

Gal Gadot has been cast and will at least have some role in “Dawn of Justice.”

This rumor clashes with the original plan of having a Wonder Woman spinoff after “Justice League.”

But props to WB for making a Wonder Woman standalone a priority after the NBC pilot failed to get a season commitment from NBC. And after “Catwoman” and “Elektra” it’s vitally important to actually have a good comic book movie with a female headliner.

After “Justice League,” this is the film I’m most interested in seeing.

Warner Bros. has actually found a niche that Marvel Studios and the other studios featuring the Marvel Comics characters haven’t in establishing team-up films, a common staple of comic books and WB is on the right track with best friends Batman & Superman and Flash & Green Lantern. This is a smart move by WB in rehabilitating Green Lantern after the underwhelming 2011 Ryan Reynolds film by pairing him with another character in hopes of redeeming the character to non-comic book audiences. I’m very interested if WB plans on using Grant Gustin who will be starring in the CW’s “Flash” TV show for the role. It’s three years out and if “Flash” is a major hit than WB would be foolish in not capitalizing on the TV/film synergy.

This one is a bit of surprise as we’d all presumed “Dawn of Justice” was the “Man of Steel” sequel, but it looks like we’re in for a dedicated Superman sequel four years from now. That is some serious planning on WB’s part and you’ve gotta give it up to them for at least having a plan.

My biggest gripe though? These plans need more “Arrow.“ 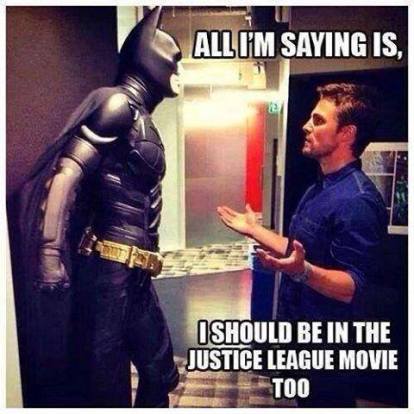