You’d be forgiven for forgetting Netflix’s slate of Marvel Comics TV shows set to debut May 2015. After all, Marvel Studios certainly seemed to while hyping up its 2015 lineup of movies during San Diego Comic Con.

That leads us to patrol the net for set pics of said shows and the first gives us a look at Daredevil, or rather his alter ego Matt Murdock played by Charlie Cox (“Boardwalk Empire”).

He definitely looks the part, but I’m sure we’ll all very curious as to what his Daredevil suit looks like.

Despite all the issues people had with the film starring Ben Affleck, few seemed to have problems with the suit and with the acceptance of superhero costumes now, I’m thinking we won’t get some crazy outfit for ‘ol Hornhead. 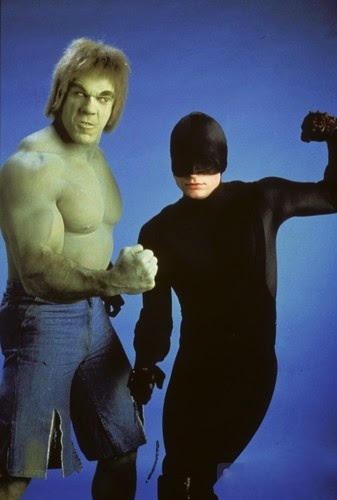 At least nothing worse than that awful, awful costume from “The Trial of The Incredible Hulk.” Geesh, we’ve really come a long way with our live-action comic book movies …