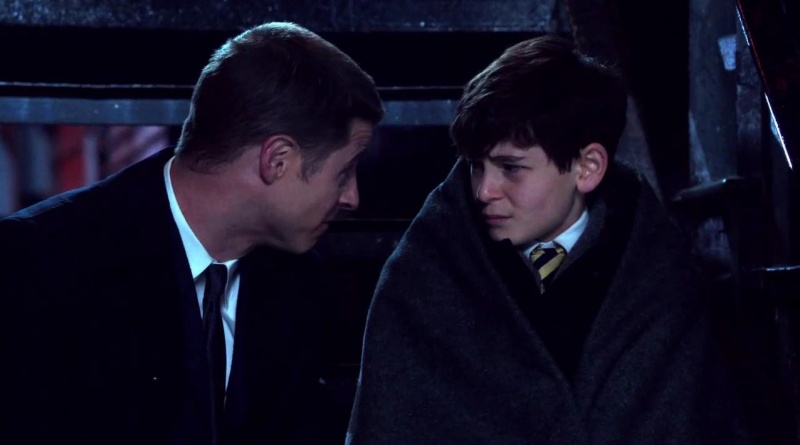 Of the three new comic book based TV shows debuting this fall, Gotham seems poised to be either the biggest breakout or the season’s biggest flame-out. If it works, it’ll be because FOX successfully married the ever-popular cop procedural and the surging cinematic comic book juggernaut spreading its dominance to the small screen.

The premise of Gotham is simple – basically it’s a Muppet Babies look at Gotham featuring most of the major players of DC Comics’ darkest city as pre-teens and young adults and the rise of Det. James Gordon (Ben McKenzie, Batman: Year One) fighting a losing battle to save Gotham’s soul before the arrival of Batman.

Like Smallville before it, Gotham‘s biggest challenge will be keeping the audience interested knowing they’ll never actually see Batman appear onscreen. The premise seems a bit limiting as a post-Batman debut Gotham would allow for the fully fleshed out versions of his Rogue Gallery to torment Gordon and the Gotham City Police Department. There were a lot of expectations for this pilot episode and it delivered exactly what you’d expect from the first episode of a new series – some good, some bad, some uneven and some things the showrunners will need to address quickly to ensure a second season. 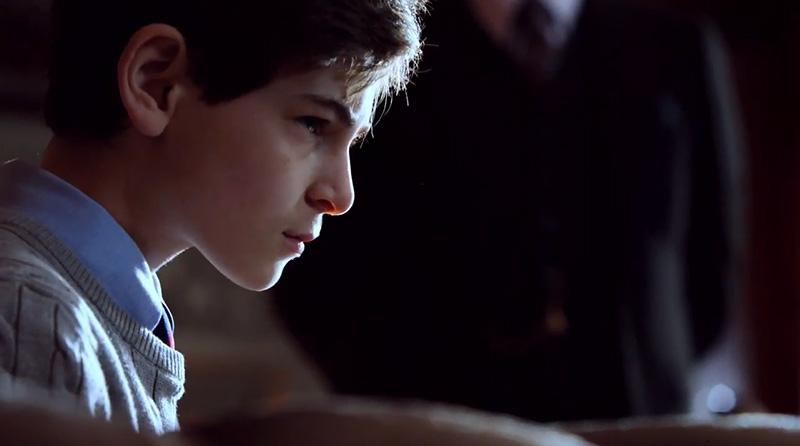 That said, there’s very few shows that start off flat-out amazing with their first episode so I’ll be grading on a bit of a curve.

Give writer/series creator Bruno Heller credit for jumping right into the deep end. Before the first commercial break, we witness our first future Catwoman heist as a bright-eyed Selina Kyle (Camren Bicondova) nimbly steals some milk and pickpockets an unsuspecting bystander; Gordon establishes himself as an uncompromising, efficient cop in a cliche standoff scene and Bruce Wayne’s (David Mazouz, Touch) parents are killed. So no need to worry that the Waynes were going to be pivotal players early on in this show before getting killed in the mid-season or season finale. It does seem like a wasted opportunity to not flesh them out a little more since we’re getting the early days of every other Gotham character.[irp]

The handling of Thomas and Martha Wayne’s murder in this is unexpected as the masked robber gets the money and the pearls before shooting them unprovoked. It’s harsher and more jarring than the typical take, but in this version, it makes little sense that the assassin would leave Bruce alive on the off chance he could identify him. And Selina sees it all from a stairwell… 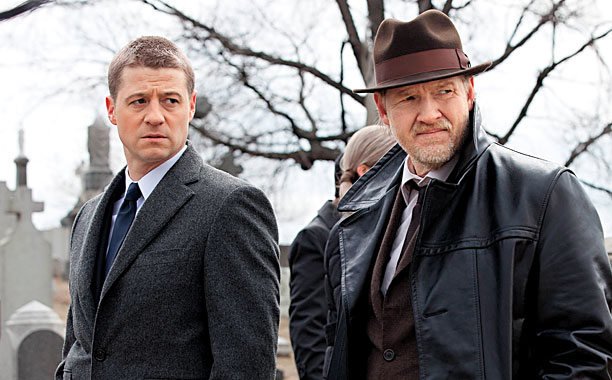 Gordon’s partner Det. Harvey Bullock (Donal Logue) doesn’t want anything to do with the investigation into the Wayne’s deaths, but Gordon promises Bruce he’ll track down his parent’s killer so Bullock is stuck with the case and his goody goody partner. The most dramatic and somewhat disappointing to Batman fans will likely be the portrayal of Bullock. The show’s take features a Bullock more similar to Det. Flass, Gordon’s on the mob take partner in Frank Miller’s acclaimed Batman: Year One and not the lovable loyal loser he’s been portrayed as in the comics. Presumably, this will allow Bullock to have his own story arc, but he seems pretty irredeemable by the end of the episode.

The pair track a lead to Fish Mooney (Jada Pinkett Smith), a mid-tier crime boss who knows who killed the Waynes – Mario Pepper. They track Pepper down and after a decent chase and fight scene, Bullock kills Pepper to save Gordon. Case closed. Or maybe not.

GCPD investigators Renee Montoya (Victoria Cartagena) and Crispus Allen (Andrew Stewart-Jones) get tipped off by one of Fish’s main henchmen, Oswald Cobblepot (Robin Taylor), that Pepper was framed and Bullock and Gordon were in on it. Director Danny Cannon headed up 25 episodes of CSI: Crime Scene Investigation and some segments have CSI fingerprints all over them even in showing Gotham in a far brighter, sun-drenched light than you would typically associate with this depressed, downtrodden city. 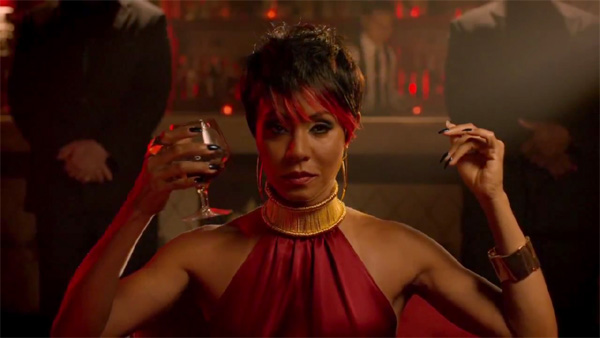 Montoya dramatically reveals this info to Gordon’s fiancee Barbara (Erin Richards), who Cannon not even remotely subtly hints was Montoya’s ex. Upon hearing the news, Gordon confronts Fish and gets strung up by her goons. Bullock has a mild change of heart and tells Fish to let Gordon walk, but Fish turns on him and gives her men and a “Resident Evil” reject orders to chop them up in a slaughterhouse.

This leads to the introduction of Carmine Falcone (John Dorman), who in the briefest of screen time for all the principal characters, easily establishes himself as the most fascinating. His scene with Gordon explaining why law and order was necessary for organized crime to thrive in Gotham hinted at the real potential of the show — Gordon trying to take down the mob, not random run-ins with Batman’s future foes.

One major gripe that becomes apparent very early on is the heavy-handed insertion of eventual Bat villains just to remind viewers that Catwoman, The Penguin, The Riddler (Cory Michael Smith) and Poison Ivy (Clare Foley) do exist in Gotham. But no mention of The Joker kinda makes those other cameos irrelevant. 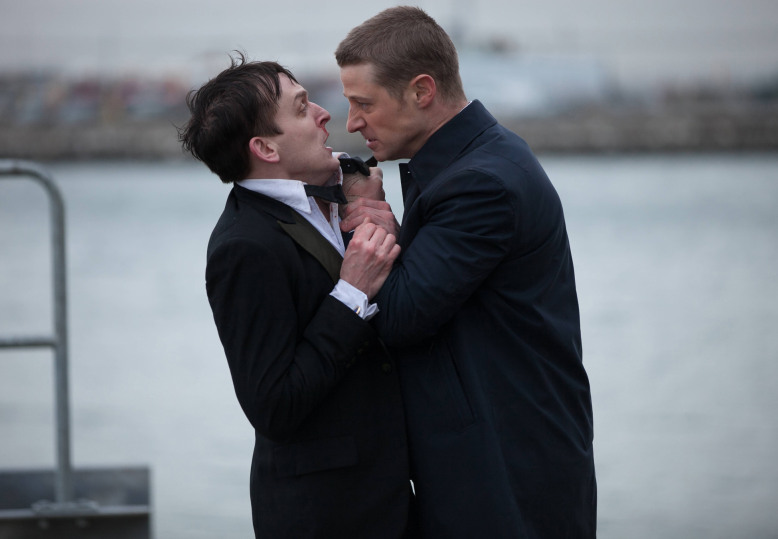 Bullock comes to Gordon with a proposition to show his loyalty to Falcone and Fish – kill the captured Cobblepot and send him off the pier. This is one of those segments that have no suspense as we know Cobblepot, like Kyle, Bruce, etc. will survive any threat, but the actors make you feel this desperation point in their characters. Gordon shoots the air close to Cobblepot, who swims off underwater, but it’s unclear if Bullock knows what really went down.

Back at Wayne Manor, Gordon learns Bruce is trying to overcome his fears. This time, by scaling the roof of Wayne Manor. Inside, Gordon tells Bruce his parents’ killer is still on the loose, but he has to work the system to find them. Like his scene with Dorman, McKenzie and Mazouz have another episode standout, but to keep them impactful, hopefully their interactions are limited in future episodes.

With so much happening this first episode, it’ll be interesting to see where Heller and his writers go from here. Devote all of season 1 to the murder of who killed the Waynes or stick to more run of the mill criminal needs to get taken down in 60 minutes fare. As far as series premieres go, Gotham shows a lot of promise now it’s just a matter of living up to it in the weeks to come.