There possibly isn’t a more savvy A-lister than Robert Downey Jr. in how he connects through various social media platforms with his fanbase. Today, he talked with his fans in the ever popular Reddit AMA (Ask Me Anything). Here’s some of the (awesome) highlights: 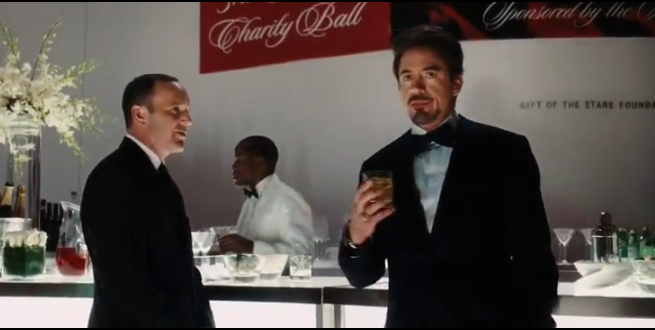 What ongoing TV show would you be willing to guest star or do a cameo for?

Any chance you’ll drop by on Agents of SHIELD this season? :)

Nothing is impossible. But there might be a fair amount of red tape involved in something like that. I love Clark Gregg, and am pleased the show is doing so well.

You’ve spoken before about your willingness to re-don the Iron Man Armor if Mel Gibson was to direct. First of all, on a scale of 1 to 11 how serious were you? Secondly, what do you think Mel Gibson would bring to the Iron Man series and would you still consider returning if he does not direct?

It was an offhanded remark to a journalist and friend. I have other projects in mind for Mel and I – sooner than later the Marvel Roster will be made public and all questions will be answered.

When you signed on for Iron Man did you ever imagine how incredibly popular the character would be? How do you feel about it all now? 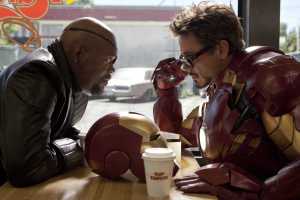 It was beyond my comprehension for the first 2 years. And now I see it as a logical, lucky, entertaining piece of history.

You have a lot of great one liners over the Avengers series, as well as Iron Man. How many of those lines were scripted vs ad-libbed?

I’d say about half and half. Oftentimes, on the day, they’ll scribble out a bunch of alternatives, and see which one works best in the edit.

My 2 year old is fond of Hawkeye, so just for today, he’ll top my list.

Will we ever see a Sherlock 3? And what other fictional character would you love to play?

Yes, we have a Sherlock 3 in development. We want it to be the best of the series, so that’s a pretty tall order. Also, Perry Mason is a property I’m looking forward to developing further, going back to the 1931 book series…similarly to what we did with the first 2 Sherlocks, mining the original material for things that are “new.”

What is your rapper name?

Your portrayal as Kirk Lazarus in Tropic Thunder was, in my opinion, one of the best comedic performances of all time, but it must have felt like a very risky role to take on. Did you have any fears about how the character would be perceived? What did you do to prepare yourself for the role? 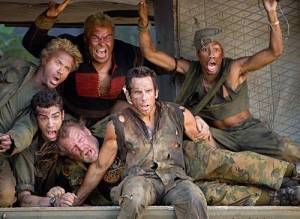 Fortunately, it’s about an affably self-important white guy who thinks he understands the “black experience.” It was so wrong and outrageous that it was forgivable. But I certainly was happy to hear from my African-American friends that they were okay with it, and some of them even delighted in telling me what relative it reminded them of. Somebody just told me just the other day that they’re convinced that I was channeling Wesley Snipes. He’s a pretty cool customer, so I don’t want to presume I would be up to the task.

Being such a big star I imagine that you get many people asking for autographs etc. I was wondering what is the strangest or most memorable fan encounter that you’ve had? 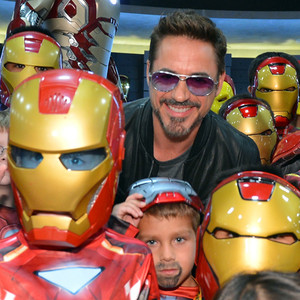 I love running into kids who didn’t expect to see me. I once ran into a four year old who just happened to be wearing a Captain America mask at the time. It seemed natural to him, being that he was Cap, to see some of his friends around. I think I was more excited than him.

For the most part, autograph collectors are pretty cool, and when they’re weird, you just try to forget them.

In the last few years, it seems like the media has increasingly identified you with the character of Tony Stark. Can you talk about what that’s like, and how you hold onto your identity in the face it it?

The first Iron Man was essentially wrapping the character around a cooler version of “me.” As we’ve gone along, I’m starting to wonder who’s playing who, and I’m glad there are so many talented new people in the Marvel lineup. Ultimately, I’m real, and he’s not. It’s kind of important for me to remember that.

2 thoughts on “Robert Downey Jr. is up for #AgentsOfShield cameo and other reddit AMA highlights”