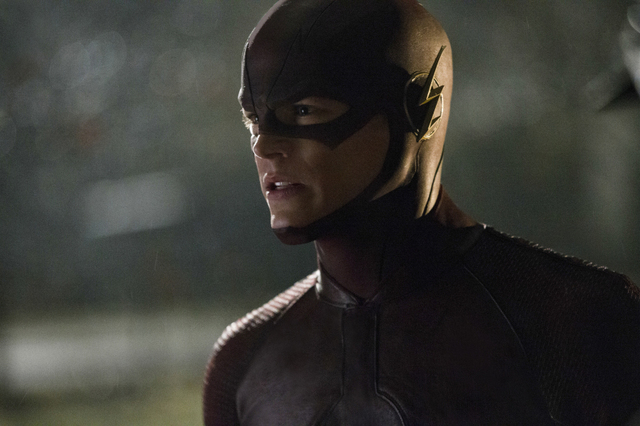 While still lagging behind Marvel Studios’ cinematic universe, DC Comics has carved out a solid niche on the TV front first with Smallville and then Arrow pushed the boundaries of what we could expect from our live-action comic book series.

Now, The Flash zooms in with big expectations. Does it live up to them? Short answer: Heck yeah and if this series premiere was any indication, this could rival Arrow for best comic book TV show faster than I thought. 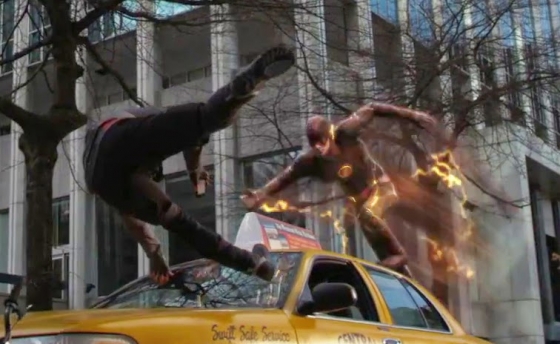 Right from the opening moments it’s clear this won’t be Arrow in another city as we start with a bright, sunny sequence with the familiar red and yellow blur of The Flash zooming through Central City. Barry Allen (Grant Gustin) narrates the events that have transformed him into the fastest man alive. But first, he’s gonna need us to be open-minded.

From there, the episode goes to fairly standard first episode stage-setting in an abbreviated origin episode. Thankfully, Arrow creators Andrew Kreisberg and Greg Berlanti and DC Comics writer Geoff Johns, move that along as briskly as possible while explaining the character for newcomers.

[irp]As a child, Barry always aspired to help others even if it put him on a collision course with bullies. His mother, Nora, commends him for his good heart and his father, Henry (John Wesley Shipp – how cool is the show for casting the 1990s TV Flash as Barry’s father?) is proud of his willingness to fight back. But things don’t stay perfect for long in Barry’s world as one night he awakens to his mother’s scream as she’s surrounded by a yellow and red blur. So it looks like we’re going with The Flash: Rebirth 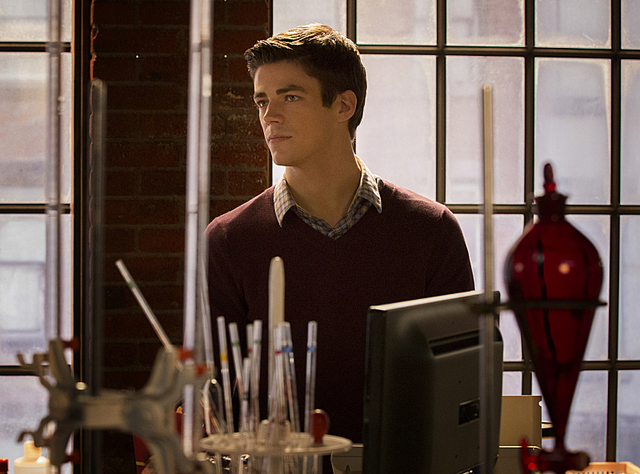 Years later, Barry is constantly late, but his forensic skills make him a valued member of the Central City Police Department. And his surrogate father figure, Joe West (Jesse L. Martin), is a respected detective on the force. We get a fun demonstration of how Barry analyzes a crime scene with evidence and a nod to Flash Facts with information popping up. His best friend is Joe’s daughter, Iris West (Candice Patton), and she’s clearly oblivious to the major crush he’s harboring.

Barry is anxiously anticipating the debut of S.T.A.R. Labs’ particle accelerator – the product of one of Barry’s science heroes – Harrison Wells (Tom Cavanagh).

But first, Barry has a stop to make in Starling City, which sets up his initial encounter with Arrow (Stephen Amell). Back home, Barry attempts to tell Iris how he feels about her, but he can’t quite work up the nerve … and a mugger steals her laptop. Barry isn’t fast enough (yet) to catch him, but the department’s new hotshot detective, Eddie Thawne (Rick Cosnett), nabs the crook. Cosnett plays Thawne perfectly unlikable, which makes sense considering his comic alter ego. 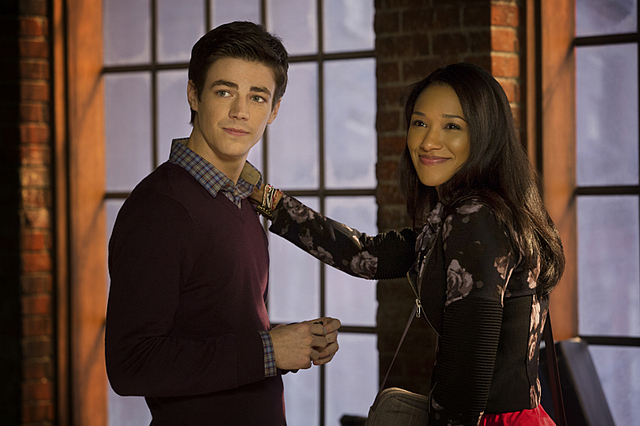 We’re then taken to the scene familiar to “Arrow” viewers where Barry is watching the particle accelerator demonstration just as Joe and his partner are tracking down the bank-robbing Mardon twins. While Barry gets struck by lightning and tossed into an assortment of chemicals, the Mardons’ getaway plane gets destroyed in an energy wave.

Nine months later, Barry awakens from his coma and finds himself at S.T.A.R. Labs under the care of Wells and his two assistants, Caitlin Snow (Danielle Panabaker) and Cisco Ramon (Carlos Valdes). The energy wave from the particle accelerator had disastrous consequences. Wells is now in a wheelchair and S.T.A.R. is now a dirty four-letter word.

Barry thanks them for their help and immediately goes back to Iris, when he starts experiencing time slowing down. His hand vibrates signaling his powers are about to trigger. In a sign that this is going to be an actual fun comic book show, Barry doesn’t cower in fear or worry about protecting his loved ones by keeping his identity a secret, he smiles and races off. Flash definitely won’t be a gloomy hero. 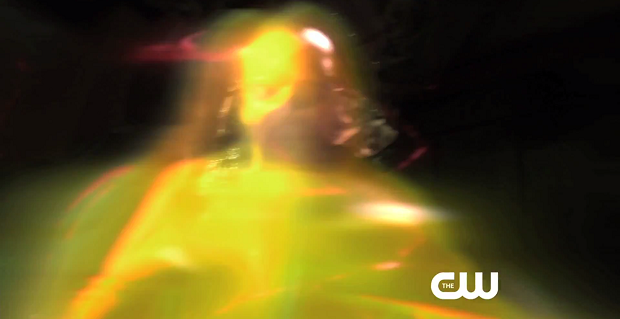 One of the Mardon twins, Clyde, is still alive and robs a bank after unleashing a mini-storm. Wells and crew are testing Barry’s abilities and Barry is loving his new powers until he gets another flashback and makes out a man in that yellow and red blur so Reverse Flash is definitely the one who killed his mother. But how long before those two tangle on the show?

After watching Iris and Eddie make out, Barry tells her he’s not comfortable having to lie to her father just as Mardon flies by in his getaway car. I didn’t like the “Smallville”-esque subplot of Thawne now dating Iris as it’s a go-too CW superhero plot device. Barry catches up to him and both are surprised at the other’s powers and Barry barely survives the encounter. Wells explains that other meta-humans were created as a result of the accident — not the biggest fan of The Rogues having super powers — and doesn’t want Barry wasting his talents playing hero as he can better utilize his gifts for research capabilities. 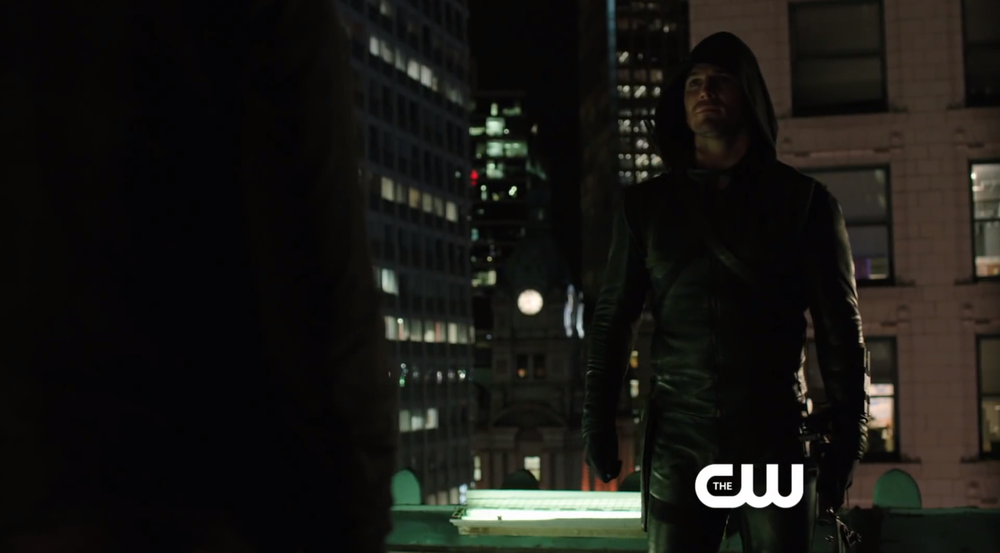 Flashback to young Barry coming home and finding his father being hauled away for the murder of his wife and adult Barry is frustrated with the memory. Unsure what to do, Barry runs off and comes to a stop after scorching his jacket and sees a sign for Starling City. Since he’s in the neighborhood, he calls up his buddy Oliver, who gives him a pep talk about how Barry can be the kind of hero that Arrow can never be.

Back at Central City, Barry asks Caitlin and Cisco for their help stopping Mardon. Cisco has a high-velocity, fireproof suit and Caitlin will gauge his vitals. While I don’t like the heroes being saddled with support staffs, this group has potential. Joe and Thawne find Mardon, but he blows them away and creates a tornado. His ultimate goal is left unclear —  the episode’s one weak point — but in the big picture, it’s a small matter. 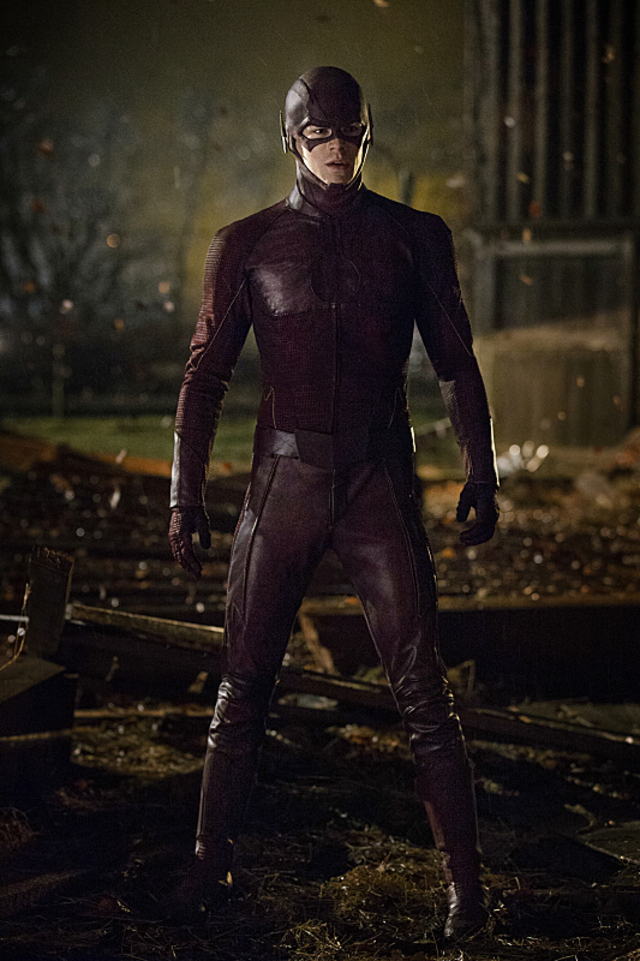 Clad in his Flash attire, Barry goes after Mardon, but it’s not until Wells chimes in with encouragement that Barry is able to counteract Marden’s tornado with one of his own. In a move reminiscent of older Marvel movies, somehow Barry loses his mask and before Mardon can kill him, Joe shoots Mardon and stares in shock at Barry, before going the cliche route of asking Barry not to tell Iris. Well, not until the season finale.

Barry goes to visit his dad in Iron Heights. We get the set-up for the season 1 over-arching theme: stop the crooks powered by the reactor and clear Henry Allen’s name.

Post-credits. Wells goes to a secret room where he stands out of his wheelchair (!) and triggers a device with a headline from the future saying Flash is lost in a Crisis (!) and there’s a fade out of the yellow blur so everyone thinking Wells is gonna be Reverse Flash looks like you win the grand prize. Thawne was an interesting red herring though, wasn’t he? And speaking of red herrings, what about Clyde’s brother, Mark, who in the comics assumed the identity of the Flash Rogue Weather Wizard? Stay tuned.

Next week we’re not messing around and getting right ahead to Flash’s other arch-rival, Captain Cold, one of my favorite villains so I can’t wait. What’d you think? Did the show work for you or do you need a few more episodes to get hooked?