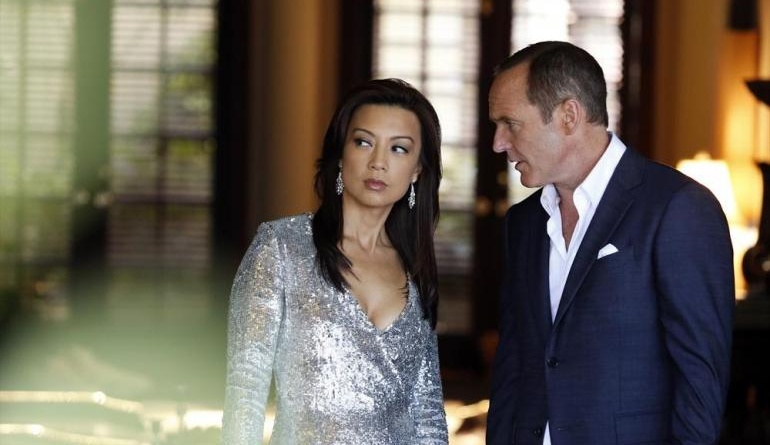 Ever since the series redefining moment midway through the first season of “Marvel’s Agents of SHIELD,” the show has been on a far more focused, intense and serious path.

With all the goodwill the show earned after the mid-season shocker, the series had still struggled to find that ideal mix of action and humor that has been a trademark of the Marvel cinematic universe. In one of the series best outings, we were treated to an episode that again feels like the showrunners have a better sense of what “Agents of SHIELD” is and what it can be going forward.

The episode kicks off in an unlikely setting – a burned out church where a painting has survived the blaze. That’s interesting, but not quite “AOS” worthy until one of the priests reveals the back, which features the Coulson Code on the back. 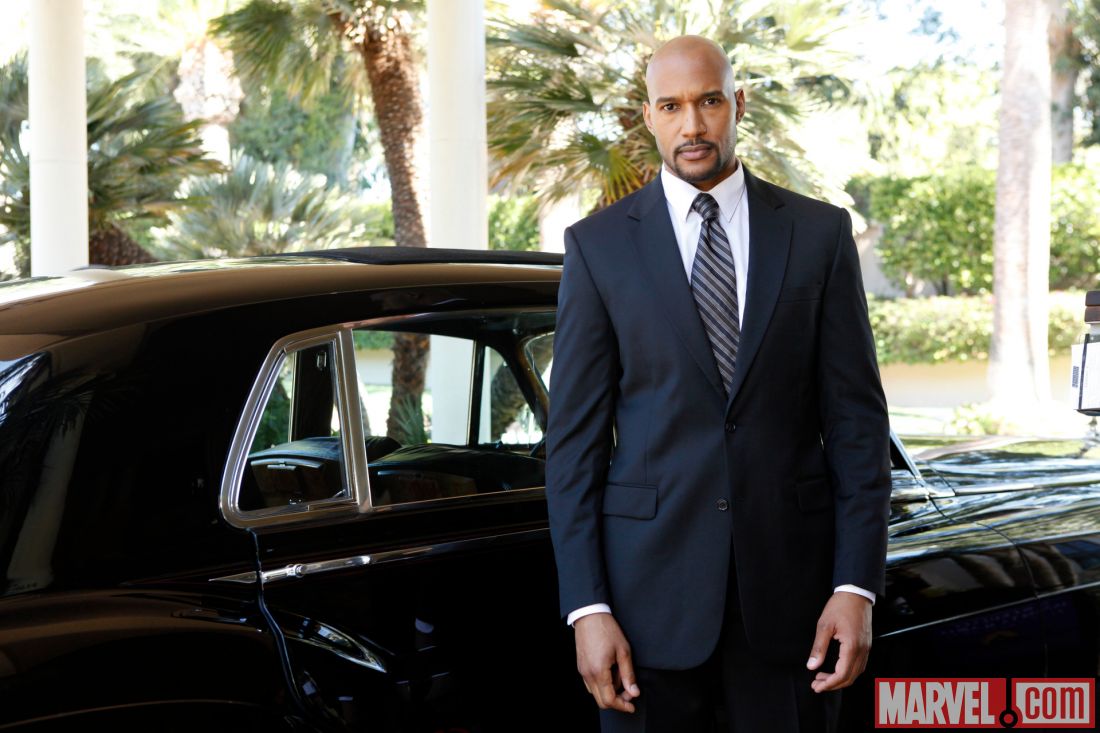 On South Beach, Hunter is making out with a random chick just long enough to take her flash drive from her purse, which Skye snares on a moped. These little moments like this help convey the show’s potential as a weekly “Mission: Impossible” set in the Marvel universe. The flash drive contained info to a fundraiser benefit for the one-percenters. Coulson and May are going undercover leading to some great character moments with May being annoyed with having to wear heels and the rest of the team shocked to hear May talking, flirting and … laughing.

Coulson is going for the painting stored in the mansion, but he’s not telling the others his real purpose for it. May’s concerned that Coulson is getting worse and he wants her to prep for a contingency plan for when he goes psycho like Garrett. The easy infiltration mission gets scrubbed when Coulson spots Talbot, who oddly seems much more relaxed than normal even when Coulson warns him not to screw with their mission.

Back on The Bus, Hunter is about to share about his ex-wife to Mack’s dismay and Trip’s increasing discomfort while Fitz sits awkwardly in the shadows (too often the show falls into too-cute humor segments, but all the intended jokes and comic relief lighter moments are working this time) when Coulson says they’re switching the plan and going for the painting now. Too late though as Talbot’s already got in it the U.S. Government’s hands … or is that HYDRA as he’s calling up Whitehall!

Coulson and May manage to get past the mansion security, but Talbot finds them and wants to partner with them to determine what the writing means. All they’ve got to do is meet him in his hotel room. That doesn’t sound like Talbot at all… 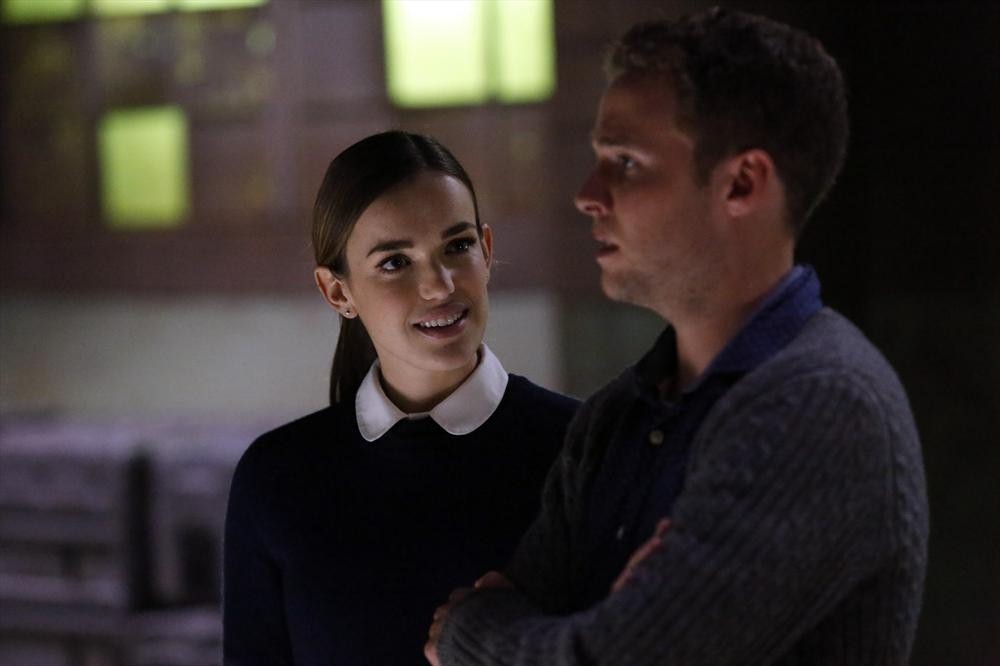 Fitz wants to join the bonding with the others, but he’s still reluctant and not even his morale booster “Essence of Simmons” can motivate him to do more than look on as the others trade stories and jokes. With Coulson and May in the field this episode is kind of like the kids hanging at home while Mom and Dad are out and the team is coming together as an interesting and entertaining group now.

May goes to the hotel and spies a Agent 33, the SHIELD agent forced into compliance/brainwashed last week. And that wasn’t actually Talbot, but Hydra’s No. 2 man, Sunil. May quickly takes out Sunil, but Agent 33 zaps her with a taser. Just don’t ruin that spectacular dress!

And borrowing a page from “Mission: Impossible” and “Captain America: The Winter Solider,” we get face masks and voice changers! I’m really digging all the fun, hi-tech spy drama we’re getting tonight. Agent 33 steals May’s dress and face and leads Coulson to “Talbot,” but not before planting a device in The Bus console. 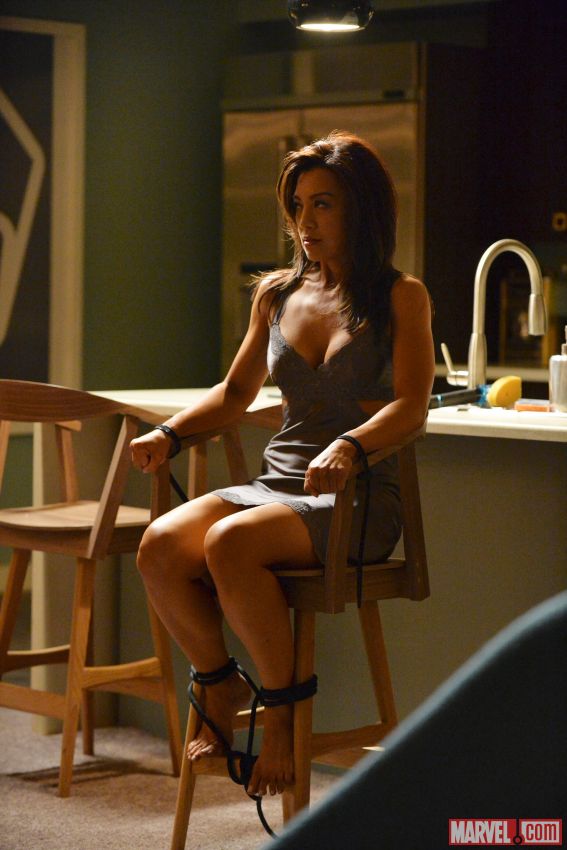 Sunil has bound May, but I still don’t like his odds and she continues to prove she’s the baddest female in the Marvel universe this side of Black Widow as she tells Sunil she’s about five feet from kicking his a$$. Coulson is en route with Agent 33/May, but she blows her cover, by touching Coulson’s hand in a reassuring manner — physical contact is a major no-no for May, Agent 33.

Coulson slugs her just as May breaks free. Sunil is a smart villain and runs instead of trying to go toe-to-toe with May, leaving us with the cool visual of May vs. May. Odd little Easter Egg of sorts. The room they were in was PH – C sorta like Phil Coulson. Even though “Arrow” did the same gimmick just last week, this mirror image fight is still fun especially since May kicks serious tail. Coulson shoots Sunil with the Icer to neutralize him and grab the painting before a Hydra assault squad arrives.

Meanwhile, The Bus goes dark and the emergency locks have sealed. With the other puzzled as to what’s going on, Fitz has to work through his lack of confidence and guide Hunter in disarming the device.

After Coulson and May return, Hunter is ready to celebrate with Mack and Fitz over some beers. At first, it seems like Fitz is going to stay alone save his Simmons delusion, but he tells the guys the girl he was in to doesn’t feel the same way and left him. Hunter and Mack agree it’s her loss. This trio has potential – we need more Mack/Hunter/Fitz scenes stat!

Coulson talks to Talbot via video screen and Talbot seems more annoyed that Coulson couldn’t tell it wasn’t him than anything else. Coulson blows off Talbot and tells May the painting is 500 years old, but the writing is new so there’s someone else having the same visions. For now, May shares her plan — passports and money for Coulson’s getaway as she’d never put a bullet through his head. Coulson appreciates the gesture, but tells her he doesn’t want to end up like Garrett and he needs her to make the hard choice. This is a subplot with real consequences and a bit of a time crunch giving it added weight. 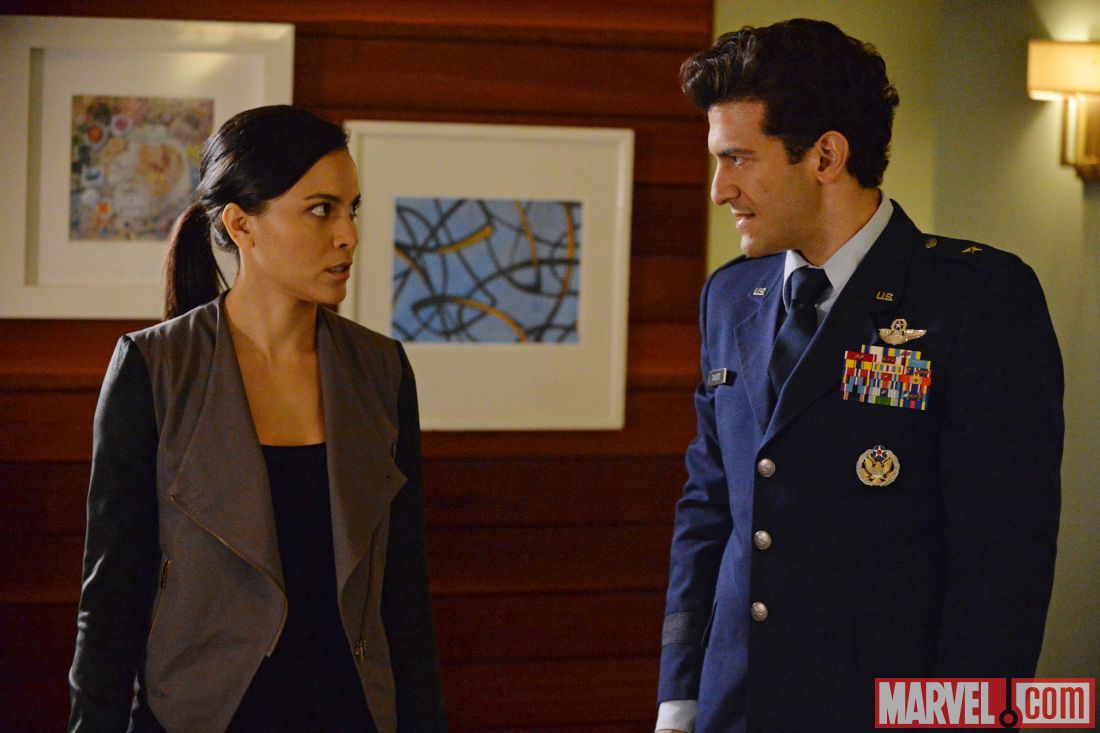 Post-credits, Reina is heading to Miami to track the painting, but Whitehall gets to her first and plants a tracer in her hand. She’s got 48 hours to give him The Obelisk or … well, you get the gist. Last season at this stage there were a lot of throwaway episodes that you could skip without missing anything. In the grand scheme of this season, nothing major happened, but the character dynamics are so vastly improved that this was a really fun outing and one you definitely shouldn’t miss.