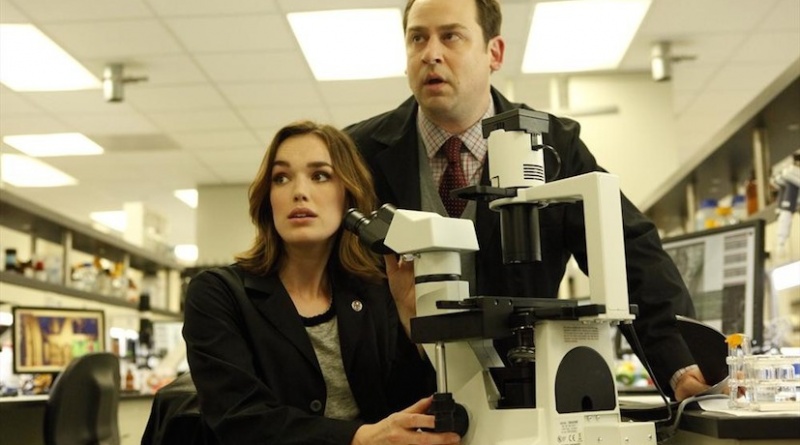 Tuesday’s episode almost felt good in spite of itself, but hinted at some troubling developments for the rest of the season.

We kick off with a wedding reception where eight guests — six of whom are members of a Naval anti-hydra unit — are killed in a Hydra attack. Sunil is not happy with the “disappointing” results and he expects neither will Whitehall.

SHIELD goes over the incident and pieces together it was a Hydra attack simply from watching the news coverage. That seems small, but these guys a crack secret agent group and they always had to go to the scene of the crime. That’s what the Barry Allens of the world are for – SHIELD can simply go after them. 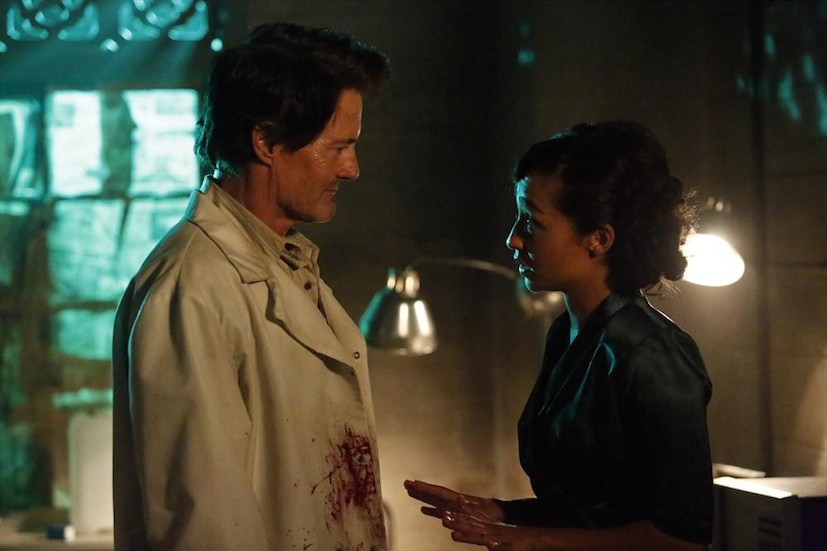 Skye gets a bit prickly with Coulson and he pulls serious rank. This dynamic between the two has been very rewarding and makes sense as throughout last season, Coulson encouraged Skye’s constant questioning of authority and now she feels free to say whatever and that doesn’t always fly with now-Director Coulson.

The Doctor is operating on some gang members when Raina barges in asking for the Obelisk to give to Whitehall. He chokes her out asking if she fears Whitehall more than her and tells Raina to beg Whitehall for mercy instead.

After watching her manipulate folks all last season it’s a nice twist seeing Raina not be completely in control. One of the gang members advises The Doctor to calm down. Yep, that’s gonna end well.

Sunil tells Simmons and her Hydra lab boss, Kenneth, to join a Hydra meeting led by Whitehall, who goes over the reception attack and asks Simmons if it’s possible to weaponize the Obelisk. I seriously hope that Simmons never plays strip poker at Hydra game nights … 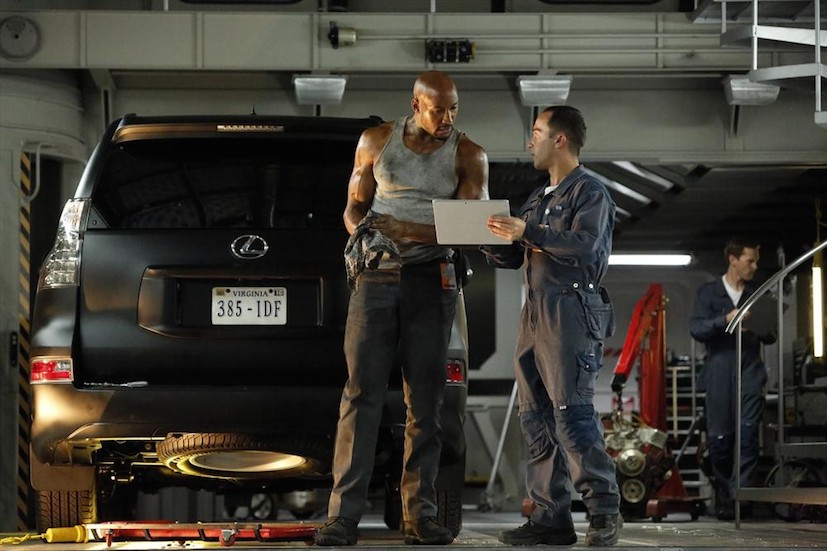 Fitz (and Simmons) watch Mack showing off his muscles putting up some equipment, which is mainly notable as Fitz finally seems ready to move on from fake-Simmons and hang out with non-hallucinations.

Skye checks out the painting carvings the team grabbed last episode and Hunter advises she keeps pushing Coulson for answers like he used to do with his ex-wife and failing that, get some Intel from Ward. Ward doesn’t want to talk artwork, but rather wants to give Skye some couch time to talk about her daddy issues wants to talk about her daddy instead. Skye loses focus briefly, but asks about the writing. Ward is relieved those aren’t hers and says once Garrett started doing that, he wasn’t the psycho daddy stand-in he’d know for so long.

Raina is en route to beg to Whitehall, but decides to follow Simmons outside. In the season’s first completely ridiculous moment, Simmons gets on her S.H.I.E.L.D.-pad (sPad?) and relays a voice message to Coulson, which seems to go against every step in spy infiltration 101.[irp]

Skye confronts Coulson. He tells her the truth and also admits to passively monitoring her since she isn’t having the same reaction to the GS14 injection – possibly because she’s an alien. And we’ve been doing so well not making the show all about Skye! May comes in saying that Raina’s on the phone and needs to meet with Coulson ASAP. 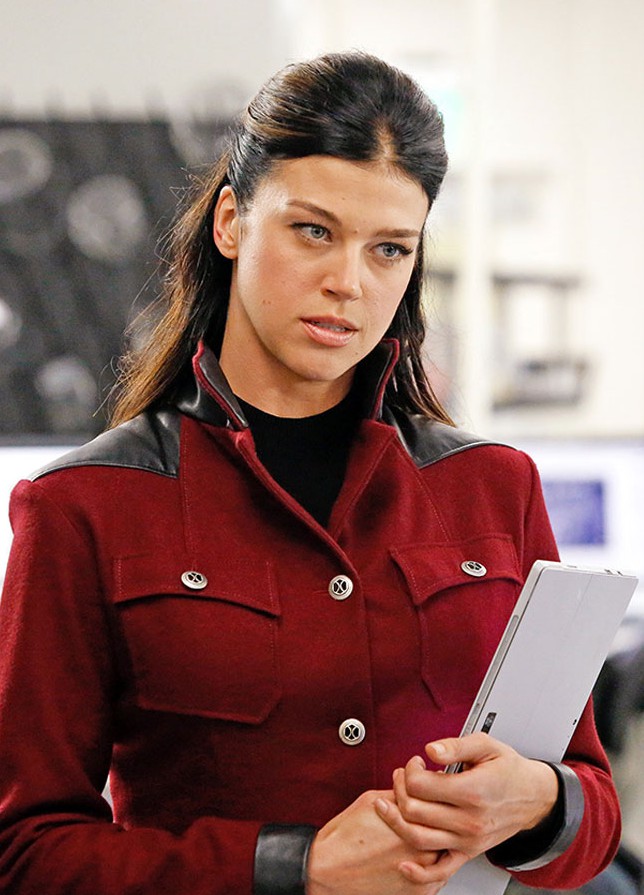 Cut to Sunil walking in the Hydra lab with an intimidating enforcer (Adrianne Palicki) looking for the S.H.I.E.L.D. mole. She seems to think Simmons may know something based on her history with Coulson, but the Hydra squad finds the sPad in Kenneth’s drawer instead.

Coulson meets Raina in a restaurant with Hunter playing a fellow diner and Skye and May listening in the kitchen. Raina threatens Coulson with a cell phone pic of Simmons holding her s(hield)Pad. Uh-oh.

Simmons comes out the bathroom and encounters the Hydra enforcer again. Man, she sure does seem … Amazonian compared to Simmons. She suspects Simmons planted the S.H.I.E.L.D. device in Kenneth’s desk and warns her that Hydra is everywhere.

Raina starts working her charm and gives Coulson two-minutes to help her convince Skye’s dad to turn over the Obelisk or she exposes Simmons. Coulson coolly says no deal. While he’s been forced to play rigid den mother for his team when he’s on his own, Coulson reinforces why he’s the best of the AOS. A flustered Raina IGs the Hydra system and Simmons and her sPad pops up on everyone’s desktop. (Except that one guy playing Galaga…) 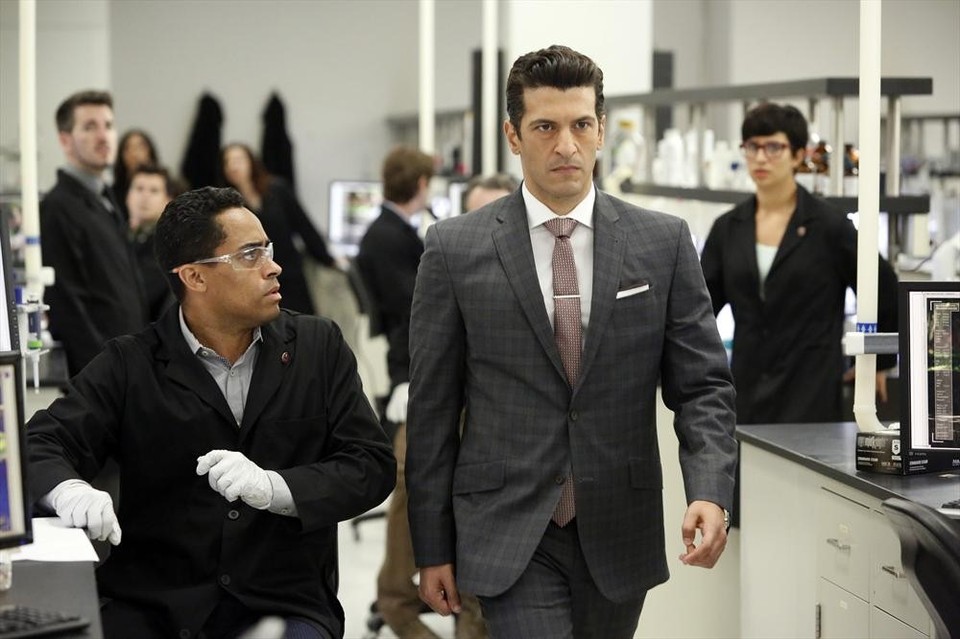 Sunil leads a team to get her and Simmons manages to outrun them, but not before coming head on to the enforcer, who turns her batons against her two Hydra guards and introduces herself as Bobbi Morse, another undercover agent Coulson sent in to protect Simmons. They barely escape and leap off the rooftop to land on the Quinjet piloted by Tripp.

Hunter tags Raina with a tracer and Coulson doesn’t make any promises that they’ll help her. Coulson, May and Hunter discuss plans and realize Skye’s gone after Raina. She reaches The Doctor’s office, but only finds a picture. Coulson follows her and The Doctor observes them from his official “Scarface” clock cam. May found the bodies of the crooks who came in and Skye says daddy is a monster, the word he feared most hearing from her and it ticks him off. This has not been a good night for tablets.

Tripp, Morse and Simmons return and Coulson says Morse is now a member of the team, an announcement that quickly upsets Hunter as Bobbi was his she-devil ex-wife he kept referring to. He says he preferred her blonde (like the rest of us comic geeks, but we’ll manage). Fitz and Simmons have an underwhelming reunion and Skye tells Coulson she wants to bring her father in and demands Coulson tells her everything, which disappointingly he does. He shows her his latest carving and Skye, being the team’s genius at everything, quickly determines it’s a map.

My biggest problem with this episode is that it seems to be positioning Skye as a vital character again — a direction that sent viewers scrambling to find anything else to do with their time. Last season, she was the redundant attitude-hacker outshining Fitz/Simmons and if she’s back as one of Coulson’s confidants, it will diminish May’s role and as evidenced by last week’s show, “AOS” needs much more May than Skye. 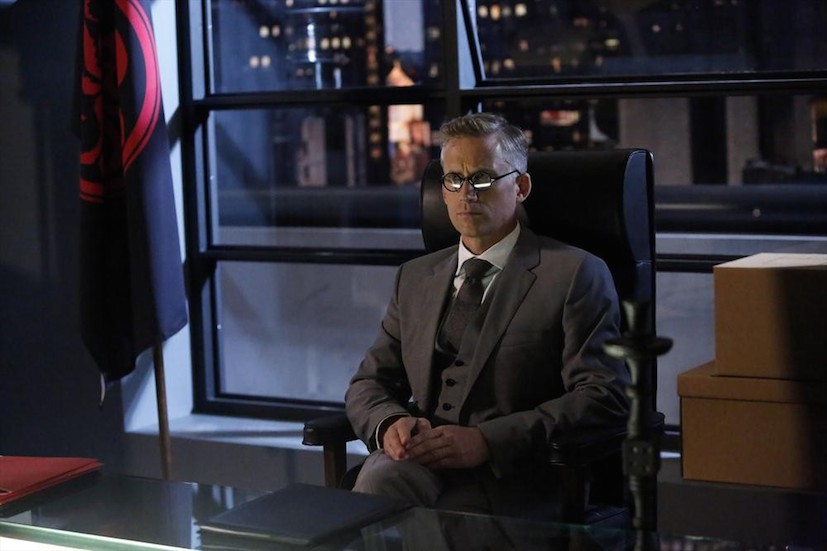 Post-credits, The Doctor visits Whitehall and promptly kills his guards. He presents the Obelisk and wants to help Whitehall use it in exchange for killing Coulson … and everyone else.

Next week looks to be very Ward/Skye heavy, which doesn’t seem like a good idea, but who cares? The show is wisely being used as the lure to see the first trailer for “The Avengers: Age of Ultron.” Pretty sneaky, Marvel/Disney.

3 thoughts on “Agents of SHIELD: A Hen in the Wolfhouse recap, S2,Ep5”