The morale of tonight’s episode is Rick Grimes keeps his promises.

Season 5 has not been of the playing around variety with up to this point a feeling of impactful events each episode and this week’s may have been the most shocking yet.

Picking up from last week, Gareth is waxing poetically to Bob about Terminus and its post-traumatic encounter motto: join us or feed us. One of Gareth’s crew spotted Carol and Daryl drive off, which leads to Gareth explaining why he is partial to making meals out of women due to having more fat. He reasons that pretty people taste better and wonders how Sasha will taste. Since ‘ol Bob is literally the one-legged man and will be winning no proverbial a$$-kicking contests, he has to resort to the one ace up his sleeve — he’s been bitten and taunts Gareth’s crew that they’re eating tainted meat.

Gareth’s crew does some quick regurgitating, which on practically any other show would be the most disgusting thing we’d see this week. Gareth reassures them they properly cooked Bob so they have nothing to worry about. Clearly, Gareth was a fan of the five-second rule and then some.

So either way Bob isn’t long for this show. For whatever reason, as he didn’t get any particularly memorable story lines save the brief alcoholism issue, I liked Bob and am sad to see him get written off so quickly. He’s a character that would have had more time to develop had he been introduced around Season 2 while chilling on Herschel’s farm.

Sasha, Tyrese and Rick are in the woods searching for Bob while inside the church, Maggie starts to, but puts aside the Bible – a subtle, but clear message that she no longer finds the religion that Herschel taught her to be viable in a post-walker world.

Sasha confronts Gabriel and he insists he has nothing to do with what’s happened to Bob, Carol and Daryl’s disappearance. Rick asks about the “burn in hell” message carved on the outside wall and Gabriel shares that congregation members tried to get into the locked doors, but were making too much noise and attracted walkers. Gabriel would not be fun to play hide and seek with. 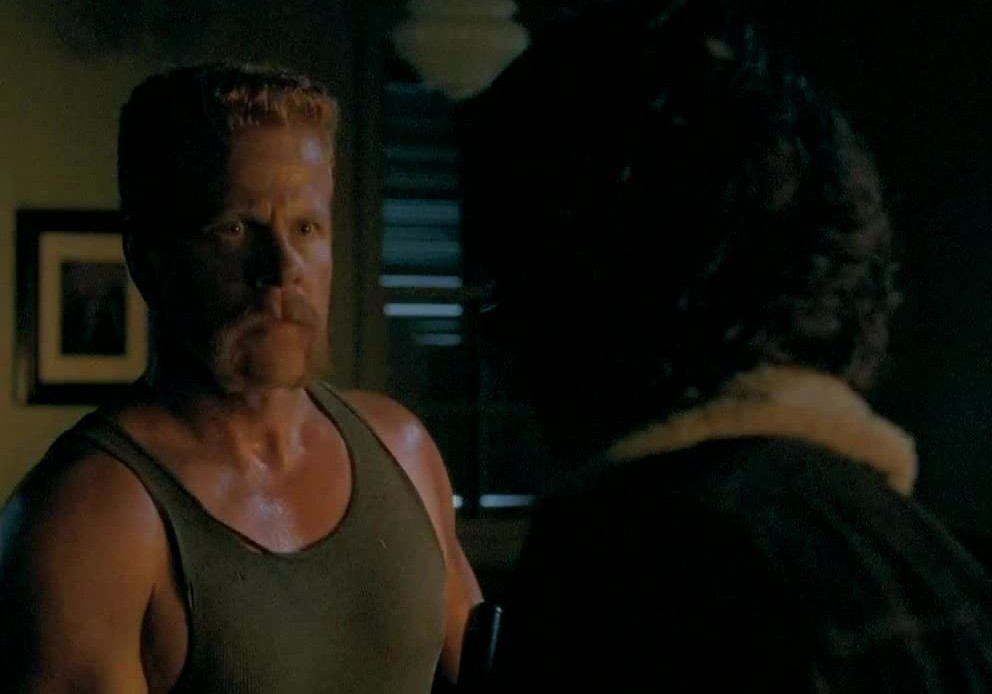 The gang hears whistling outside and they see Bob sans left leg. Bob provides an update on Gareth’s forces and his bite. Abraham has heard more than enough and is ready to go – the church van is fixed and he’s not willing to risk Eugene’s safety. Rick isn’t down with that option or them taking the van. Glenn plays peacekeeper by persuading Abraham to help Rick and the others take out Gareth and he and Maggie will go with Abraham and his crew to Washington. The most enjoyable part of that sequence was not watching Glenn assert himself among the two alpha males, but Tara saying she has a plan and promptly being ignored. Oh Tara, maybe one day you’ll have value on the show again…

Rick is laying out the attack plan and Sasha wants in. Tyrese suggests she stay with Bob as she’ll come to regret not spending his final moments by his side. Sasha wants some satisfaction and gives Tyrese her knife and instructs him to kill Bob when he stops breathing.

Rick leads most of his group out of the church leaving Rosalita, Carl, Eugene, Tyrese, Gabriel and not-quite-a-walker Bob inside. In a neat extended sequence showing Rick’s crew leave and nothing happening on screen for a solid minute, Gareth leads his forces — including the one we thought Tyrese pummeled to death inside the Terminus outpost — inside the church. He’s done his Grimes Gang scouting report and rattles off everyone who’s still inside. Gareth isn’t a charismatic leader like The Governor and he’s not an out of control loon like Shane, but he is frightening because he seems perfectly rational… outside the whole eating people thing.

There’s a lot of tension in this scene as the camera shifts back and forth to Carl steadily aiming his gun at the door and Gareth calmly explaining why they should open one of two potential hiding space doors and avoid a confrontation. And then, Judith cries and Gareth’s face lights up like someone rang the dinner bell. Looks like meat’s back on the menu boys. 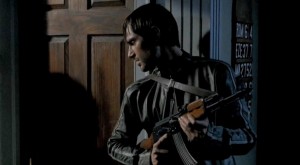 But before Gareth’s guys can swoop in, two headshots take out two of them and Rick emerges from the shadows. Before Gareth can talk his way out of it, Rick clips him in the knee and shoots off two of his fingers. Gareth then goes back to the same Terminus plea when their attempts to eat anyone fail — blame the guys who invaded Terminus — and say they’ll never be a problem again. Rick explains he didn’t shoot them because he didn’t want to waste the ammo and he had a promise to keep.

Remember back in episode 1 when Rick ran down the weapons cache and said “There’s guns in it. AK-47… 44 Magnum. Automatic weapons. Nightscope. There’s a compound bow and a machete with a red handle. That’s what I’m gonna use to kill you.” Well, tonight he made good on that threat and pulls out the machete and slices up Gareth like he’s the turkey at Terminus’ Thanksgiving dinner and the rest of the Grimes Gang gun butt and otherwise kill off Gareth’s crew. Yes, it was brutal, but it was pretty satisfying watching Rick make good on his promise and officially wrapping the Terminus storyline.

In the chaos, Michonne finds her sword in one of Gareth’s crew’s bag. So it was a solid win for everyone save those wearing official Terminus Cannibal boxers.

The group says farewell to Bob, who thanks Rick for allowing him to join their group and gives him one last encouraging message – “Nightmares end and they shouldn’t end who you are.” May be too late for that Bob, but you sadly won’t be around to see it. Sasha goes to finish him off, but Tyrese comes in to save his sis from having to kill the man she loved. 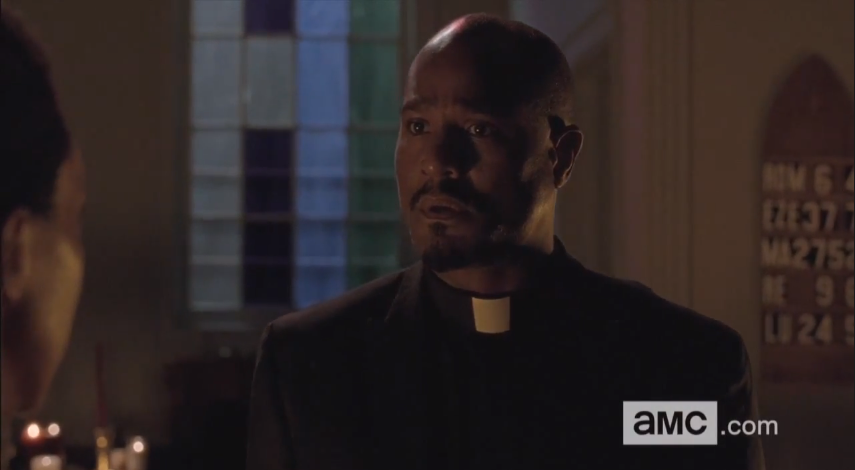 Tyrese is in the cemetery burying Bob and Rick comes over to help and find out just what the heck happened on his trip to Terminus. Tyrese says the journey killed him, but Rick assures him he isn’t dead. Abraham, Eugene, Rosalita, Glenn and Maggie head out in the bus and Abraham leaves a message in the map apologizing and asking Rick to come to D.C. The Grimes Gang does not road trip that easily. So now we have a little attrition in the ranks — some by death and others by tackling a new mission/subplot. That’ll help spread out the cast and allow for some much needed character development this season.

Later that night, Michonne is talking with Gabriel. He’s still having nightmares and hearing walker voices. She assures him it gets better when she hears something in the woods. She goes off and out emerges Daryl … and someone else who we’ll have to wait until next week to see. I’m assuming it’s not Carol.

This season has been hitting on all cylinders so far and Rick has navigated a very straight path for his team so far. Next week, we finally find out what happened to Beth.