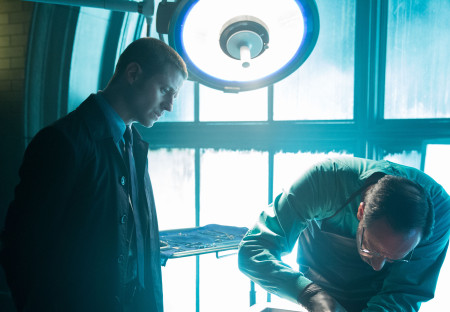 Tonight’s episode chugs along on a perfectly fine throwaway Halloween appropriate outing. Then the last five minutes has the most significant advancement in the series since the show’s premiere ending with a major cliffhanger. From a more cynical perspective, I’d argue that Gotham can’t even do a filler episode right, but for the first time, an episode finally leaves you interested in what’s going to happen next week. But before discussing next week, let’s break down this week’s installment. 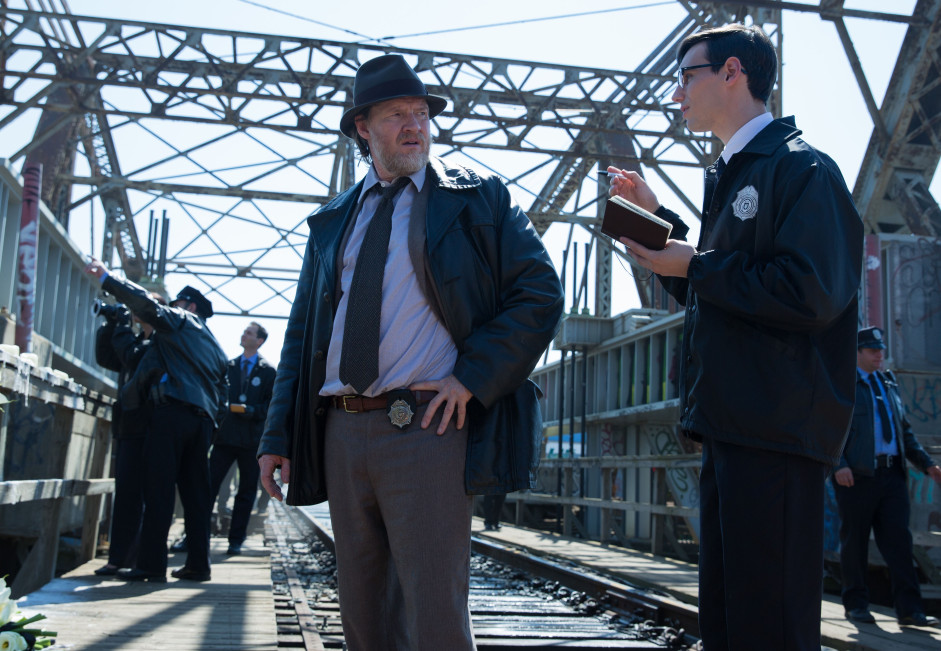 We kick off with an ironic glimpse in the past where a younger Bullock was the idealistic crime fighter and his veteran partner Det. Dix (Dan Hedaya) was teaching him the ropes — specifically that Gotham doesn’t need heroes. They find a young girl strung up dead, but find the culprit — a psycho who calls himself the Spirit of the Goat. Bullock shoots the SOG to end his deadly vendetta against Gotham’s richest.

Present day at a Bullock sees woman strung up like a SOG victim and has no time for Nygma’s riddle. Great, so Nygma is just going to become The Riddler because no one has time to listen to his riddles until he becomes a crook.

While it appeared they broke up two weeks ago, Gordon and Barbara are talking. She wants in, he doesn’t know how to let her in, but says he’ll tell her everything he can, which is so wide open to interpretation it seems to be exactly where they left off earlier. For some reason, Barbara is satisfied with that answer this time and all is well in the Gordon household.

Allen and Montoya (sigh) talk to a bum at the pier who confirms that Gordon shot Oswald. And when it comes to credible eyewitnesses, the drunk at the pier is normally the best option. 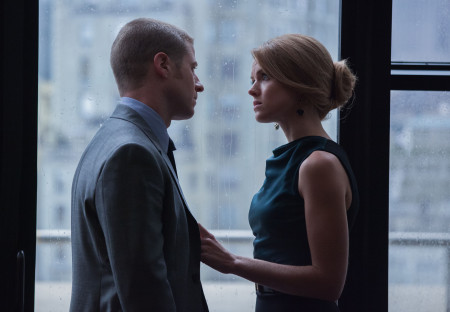 Bullock and Gordon talk to the victim’s parents and their therapist. The show has an awful habit of doing “Scooby-Doo”-lite foreshadowing where no new character with a speaking role is introduced without a purpose.

Last week, I questioned the lack of Nygma so this episode he gets an expanded role where he pesters a fellow GCPD co-worker, Kristin Kringle, by re-arranging her files and even sniffing her hair. It was an odd couple of segments and that doomed love affair/awkward romantic comedy seems a waste of time for Nygma, who the writers can’t figure out how to make a worthy addition to the cast save teases that he becomes The Riddler. 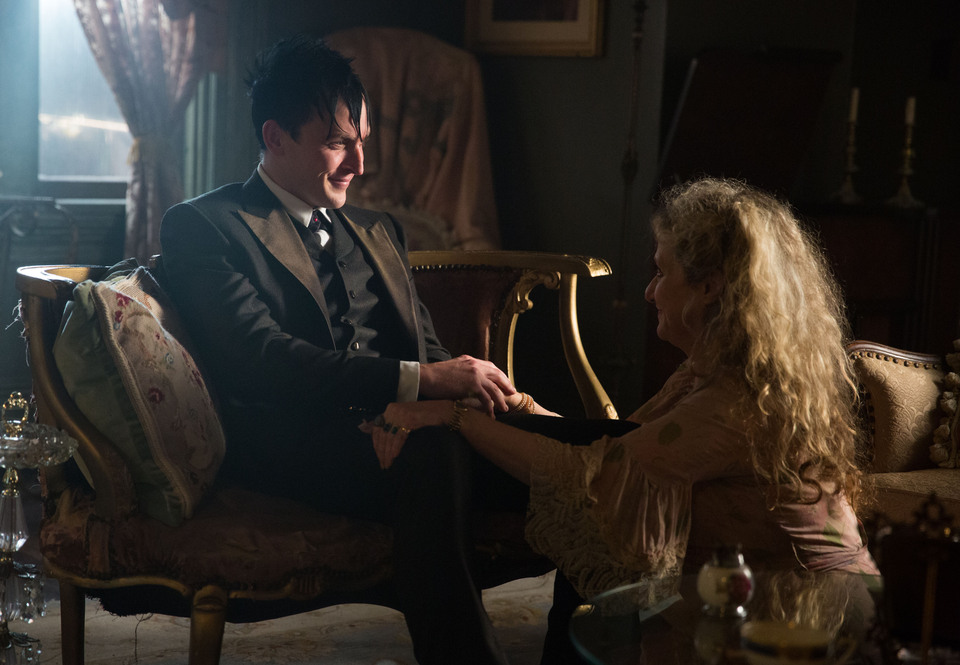 Oswald visits his mother and promises her that he’ll be somebody. This leads to a creepy scene where she’s giving him a bath and he shares that he’s got one friend — a policeman — who is going to help him clean up the city.

During the autopsy of the young woman, Bullock finds a SOG calling card that only the original would know.

Barbara goes to Montoya and tells her she’ll give her everything Gordon tells her, but he’s only been withholding information to protect her. This subplot is so awful and can’t end fast enough.

In a scene meant to show Bullock’s softer side (and succeeding) Bullock and Gordon talk to Dix at a nursing home/rehabilitation center for possible leads on the SOG. Gordon seems shocked that Dix refers to Bullock as the guy trying to be the “white knight” and is even more surprised to see that Bullock is paying for Dix’s girlie mag subscription.

After another easy round of follow the easy breadcrumbs, Bullock and Gordon find the Goat’s lair. In what’s become a show tradition, the show switches off who saves who from the crook of the week. This time, Gordon saves Bullock resulting in a rare and well-earned moment of genuine appreciation from Bullock.[irp]

Back to Wayne Manor, Selina (thought we were going an episode without seeing her, didn’t you, silly?) comes in through an open window and after spying a sleeping Bruce, steals what looks like a jewelry box. In pretty much every Batman story, it’s been established that Wayne Manor is way off the outskirts of Gotham proper so Selina really took a bus to come to the mansion and rob the rich orphan? I hope there’s more to this otherwise it makes Selina look pretty crummy to go out of her way to rob from Bruce as opposed to all the other rich folks walking around in Gotham.

In the interrogation room, Bullock thinks the case was too easy and feels like something doesn’t seem right. How crazy is this episode when Bullock is the voice of reason??? 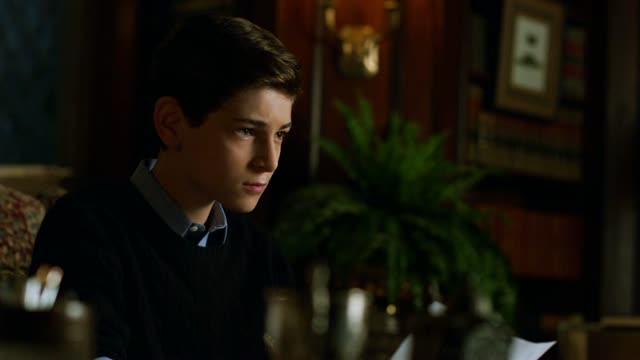 Gordon returns home to find Barbara packing their things. She tells him about Montoya’s warrant, but before she can convince him to leave, Montoya and Allen arrive at the door and arrest him. Mind you, Cobblepot is actively running around Gotham, but they have totally missed that while fixating on info they’ve heard from drunks and Fish Mooney, who thankfully was absent from this week’s episode.

Bullock confronts the therapist, who was using her hypnosis training to use patsies as the SOG to take out Gotham’s high-profile citizens. Her confession is really silly and would have just been better going a more simplistic manner of the therapist being bullied by the victims and enacting her revenge. After disposing of another of her pawns, Bullock shoots the therapist in the leg to stop her from getting away. While Gordon wouldn’t approve, it made perfect sense to me.

Back at the station, Bullock is explaining his actions to Essen when Allen and Montoya arrive with Gordon. They have an arrest for him too for abating in the murder of Oswald Cobblepot, who shocks everyone by walking into the station and introducing himself. Incensed that he’s lied to him all this time, Bullock charges at Gordon as we head to the end credits.

This was such a worthless big picture episode, but that last scene was legitimately surprising and will have serious repercussions going forward. Will Bullock punch out Gordon? Will Oswald waddle out of the station unscathed? Will Allen and Montoya lose their badges over inept detective work? Stay tuned next week!