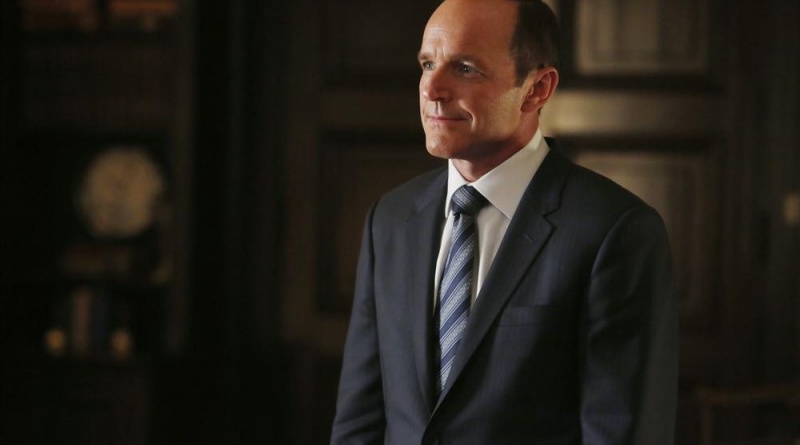 This week’s episode almost seems anti-climactic given the big slate of Avengers news announced earlier (Black Panther! Civil War! Infinity War!), but we’ve got an episode to watch if for no other reason than for that bonus footage of “The Avengers: Age of Ultron” trailer, which no doubt will be saved for the absolute final commercial break.

Gen. Talbot is speaking at the United Nations when armed forces clad in SHIELD attire crash in and use a weaponized disc to turn them into dust.

Shift to Ward in his cell doing shirtless workouts to get the ladies excited. Skye and Simmons watch him, but their attention is quickly diverted once May heads out with the news of the attack, which Coulson quickly identifies as a Hydra ruse to besmirch SHIELD’s name.

He deploys May, Hunter and Bobbi to Okinawa to take out this fake-SHIELD unit while he has Simmons try to restore the disk drive she stole from Hydra. Both Bobbi and Hunter passively question why Coulson wants the other on the mission. Meanwhile, Trip waits on something interesting to do for yet another mission. Maybe next week? 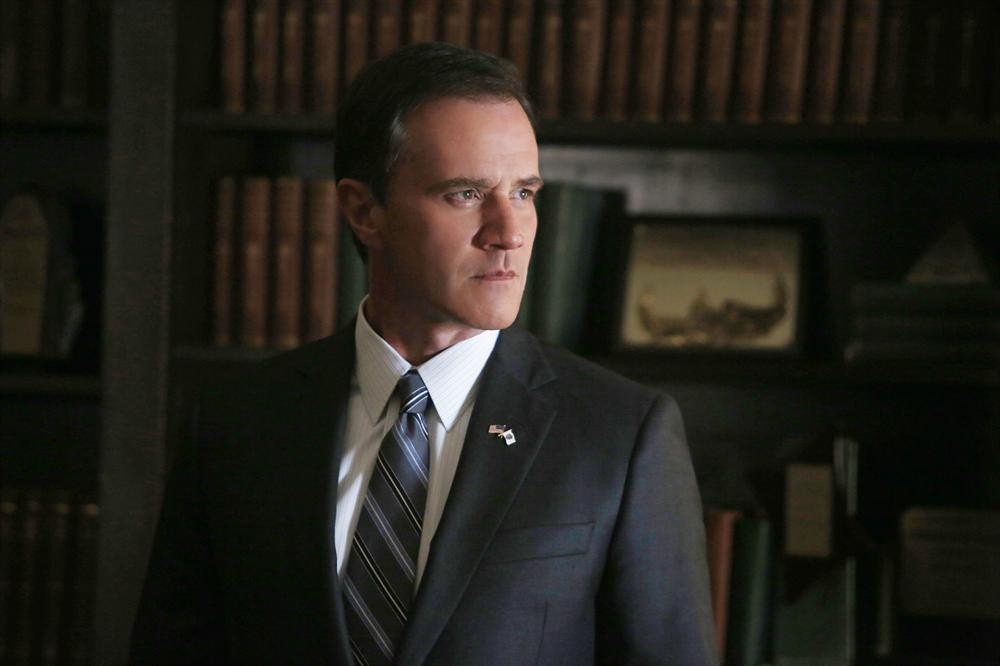 Talbot reports to a senator, who isn’t happy that SHIELD had so public an attack. Talbot doesn’t think the attackers were SHIELD, but the senator doesn’t want to hear it and wants to bring them down permanently. And as he leaves his desk, we see that the Senator’s name is Christian … Ward, the SHIELD traitor’s big brother.

Sen. Christian sets up an anti-SHIELD initiative and Coulson tells his troops to go dark including an Agent Walters. Could that be Jen Walters aka She Hulk?

Hunter and Bobbi (who has returned to a more comic-book accurate blonde hairstyle) bicker while May tries to ignore them. This dynamic is kinda like SHIELD’s answer to “Mr. and Mrs. Smith.” While it’s cute now, I don’t know if this has long-term legs throughout the season.

Fitz is babbling with hand on shoulder, his common gesture when talking to fake-Simmons, but he has difficulty talking to the real Simmons, who is taken aback by his awkwardness. He says she can’t handle the new him as she walks off. Fortunately, Mack doesn’t have the same problem and is able to help Fitz decipher a clue in the drive. Simmons thanks Mack, who says Simmons may have a problem with the new Fitz as the only thing that makes him worse is when she’s around. She knows, which is why she left. This didn’t need a quick resolution so I’m glad they’re not rushing to get Fitz/Simmons back together. 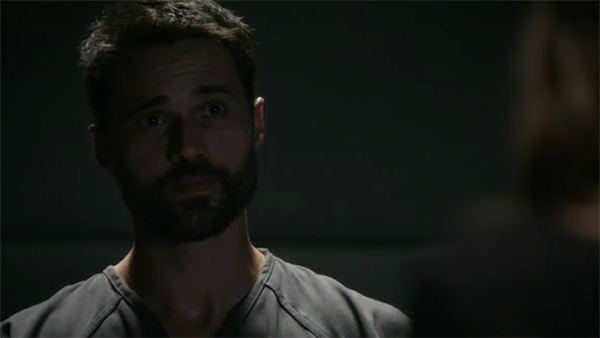 Skye sees Ward about basic information on his brother, Christian. Ward is worried that Christian knows he’s being held by SHIELD, but realizes she actually wants to talk about her father. Coulson pulls up the wall shield and tells her to focus on the mission.

Coulson surprises Sen. Ward in his office. Coulson is there and he threatens him with the news that Ward is in SHIELD’s custody as Skye returns to Ward’s cell. Christian says Ward has been lying to them about his past while Ward tells Skye the same story in a clever back and forth sequence. Which Ward is telling the truth? Christian or Grant? Ward tells Skye her mom is actually dead, but he offers to take her to her father. Evil Ward has not gotten stale one bit this season, but Skye breaks the news that hes being transferred to Christian’s care now.

Coulson made a deal with Sen. Ward to repeal the anti-SHIELD initiative once Ward is in their custody and now Coulson tells Ward he’ll never see Skye again. Ward says he thought they were rebuilding trust as he’s still a member of his team. Coulson goes off and says the only reason he’s still alive is because he was of use and his brother is now of more use. 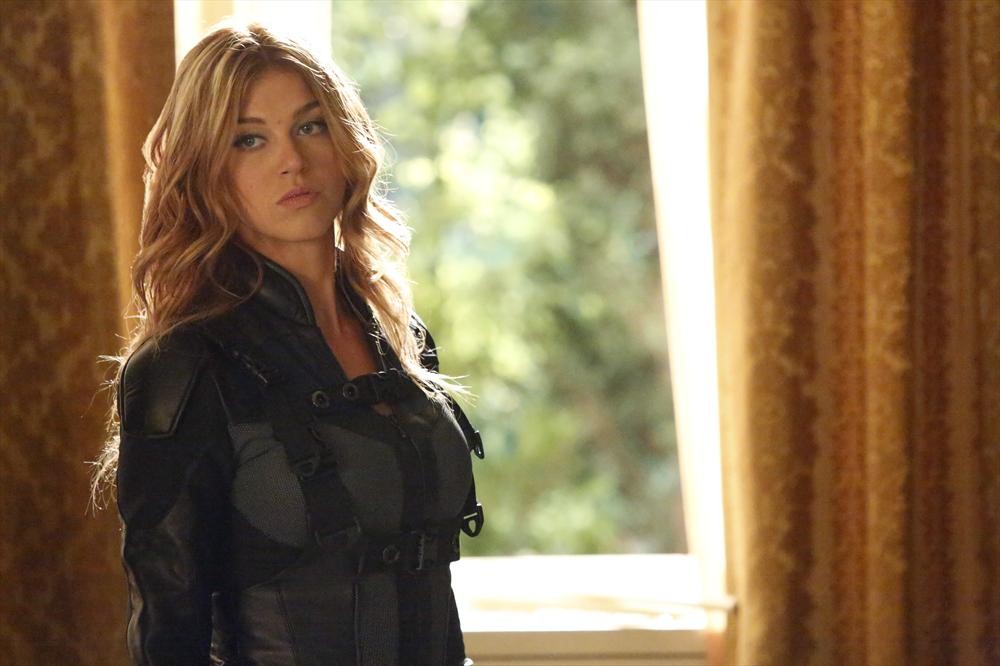 Hunter, Bobbi and May travel to a SHIELD safe house and take out the Hydra agents posing as SHIELD and Bobbi tells Hunter he’s welcome to stay on the team. Bobbi’s suit is an attempt to translate her comic book attire in real life, but it’s too black and grey to look any different.

Coulson comes to Ward and the armed guard is ready to transport him. This isn’t gonna end well for somebody. Ward is being led out and his ex-teammates are not happy to see him. Sen. Ward says SHIELD and Hydra are different. Talbot arrives at the SHIELD safe house and offers a hand to May with condolences for the SHIELD agents killed so it appears the SHIELD/army beef is officially over. Ward tells Coulson this doesn’t change anything with Skye and he will keep his promise. Sen. Ward promises to make sure Ward will pay for his crimes, but looks like Grant will be keeping his promise much sooner as he breaks his thumb to escape his cuffs and take out his guards.

Post-credits, a guy comes to a tattoo parlor to finish getting the alien drawing written on his body. Next episode promises to reveal some more about this alien code, a subplot that has stopped and started so much I’ll be glad for some resolution.

This episode accomplished a lot in clearing SHIELD, establishing Christian Ward and Ward no longer being in SHIELD custody which is some solid plot advancement for this season and again keeps the show’s momentum rolling. I’m very interested in what happens two weeks from now with the next new episode.

3 thoughts on “Agents of SHIELD: A Fractured House recap – S2,E6”