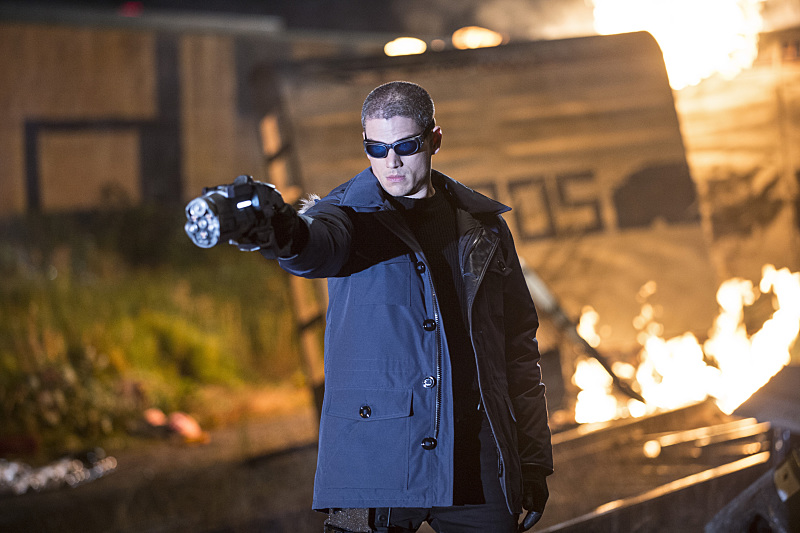 This show continues to put a smile on my face each week. After weeks of battling Firestorm’s Rogue Gallery, The Flash finally tackles one of his own and this week, it’s the biggest Rogue of them all. 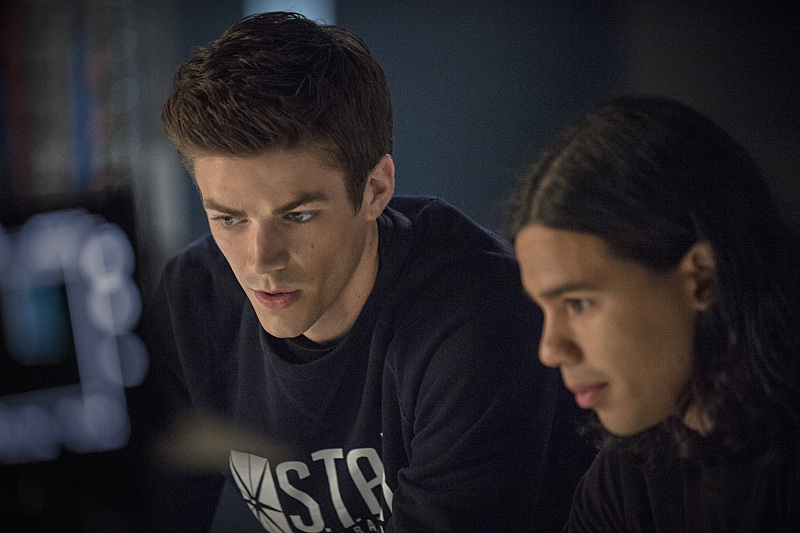 Barry is playing with Team STAR in a fun display of his speed as he multi-tasks playing chess with Harrison, Operation with Caitlin and ping-pong with Cisco. The games get interrupted when they get news of a Blackhawk Security truck being attacked by four would-be-hijackers. One has a liquid nitrogen gun. Don’t worry, the show won’t let us down by the end of the episode. This week, we get a more subtle comic reference as the Blackhawks were an elite group of fighter pilots during World War II.

Flash stops the robbery and even unmasks one of the robbers, but another shoots a security guard to ensure their getaway. Back at police headquarters, Joe wants Barry to see if he can identify the unmasked robber. In a fun use of his superspeed, Barry leafs through the file book and identifies Leonard Snart (Wentworth Miller).

Iris is excited about the prospect of starting up a blog on The Streak, but Barry isn’t a fan of the plan as he thinks it would attract all kinds of Internet weirdos — a sentiment shared by Felicity! Yea for another Team Arrow cameo and extra kudos for  whoever is putting the show credits together who actually delayed putting up “Special Guest Star: Emily Bett Rickards” until after Felicity appeared on screen. It’s something that drives me crazy on shows and can save a spoiler like that with just a little attention to detail as show here. Felicity came in town (picking up from last week’s episode of “Arrow“) to check up on Barry. This reminded me of an old school Silver Age crossover and while I’m sure the scheduling is a pain, these Arrow/Flash crossovers are such a fun treat for us I’d love to see more. 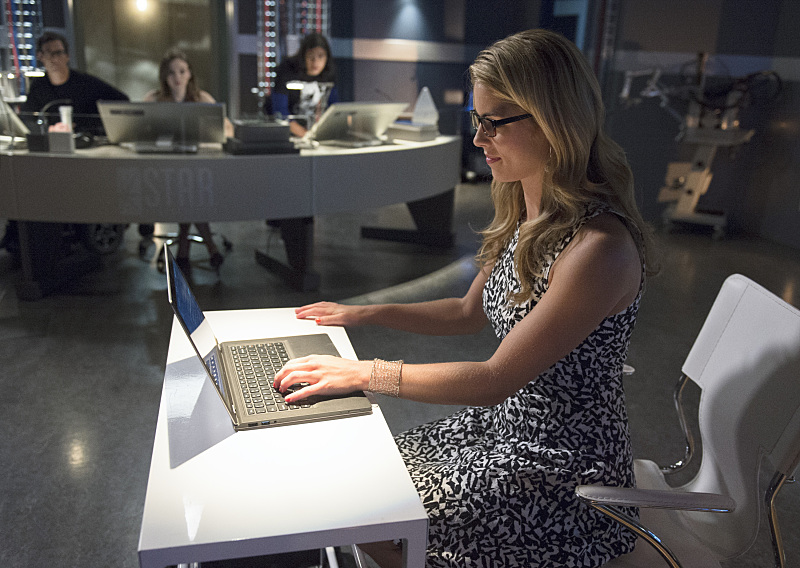 Snart is upset with one of his crew for shooting the security guard. After killing him, Snart tells the rest of the crew they’re going to have to step up their game. Barry meanwhile is loving getting a chance to show off his powers to Felicity, who is equally thrilled. Again, this show is such a beam of light in the otherwise dark and dreary world of TV comic book shows, which would have had Barry moping that Felicity was there all episode.

Felicity meets Team STAR and Barry shows off the treadmill. It seems exactly like most guys would do in trying to impress an old flame.

Eddie and Joe talk about Iris, but Joe doesn’t want their partnership to become personal. Later, Joe explains to Iris that worrying about Eddie and keeping him safe so Iris doesn’t get hurt distracts him on the field where he can’t afford to be distracted. 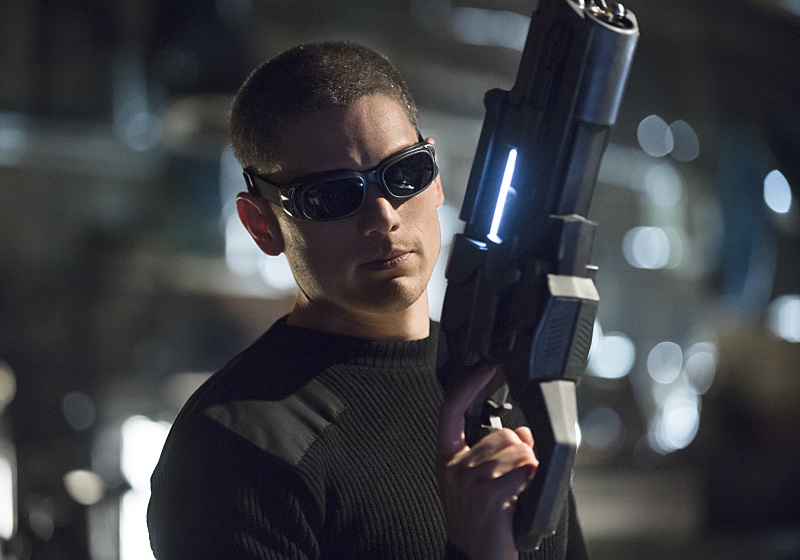 Felicity and Barry come to Iris’ coffee joint and Iris sees the sparks and tries to play matchmaker with a trivia game night double date. That won’t be awkward.

Snart is with his tech guy buddy who managed to steal a heat gun (he’s not interested) and a cold gun from STAR Labs. Snart is very interested in the cold gun and the glasses to protect against the glare, but since he doesn’t need to get ratted out, bye bye tech buddy.

At trivia night, Felicity is smoAking (Yes, I made a Felicity Smoak joke. Sue me) and clearly overdressed for trivia night. Iris says Felicity is perfect for Barry, but he’s too caught up gazing at her.

Back at STAR, Harrison angrily questions Cisco about the missing weapon. Back when Barry was still in a coma, Cisco decided it’d be wise to have a contingency plan in case Barry went…rogue and invented the cold gun. Harrison is not happy it’s now missing and that Cisco dared make a weapon in the first place.

Snart goes back after the jewel now tucked away in an exhibit, but Flash speeds in to stop him. Snart figures he’s outmatched and wants to test Flash’s speed by shooting at random people. Flash can’t save the third potential victim who is frozen to death. 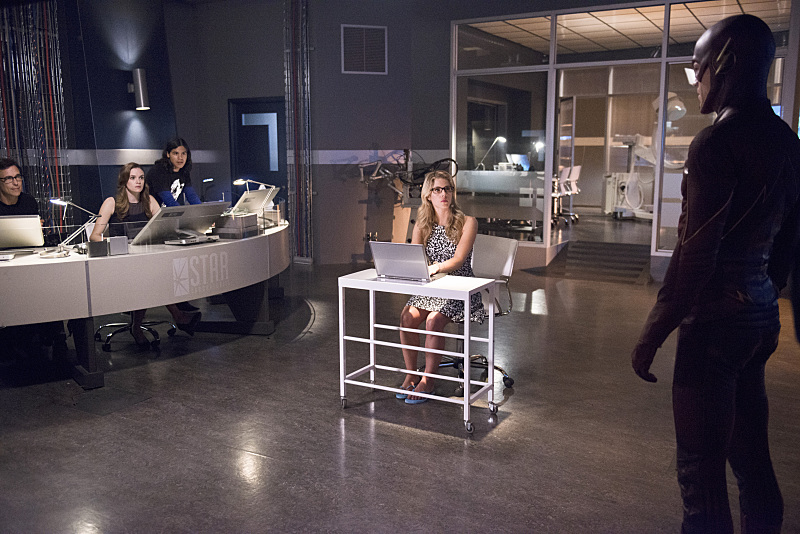 Barry is hot at Cisco for not sharing that he made the weapon and his guilt at not being fast enough to save the guard is approaching Oliver-like levels. Felicity reminds him that Team Arrow didn’t have everything down perfectly when they started and tells him he doesn’t have to do this alone.

Snart now has a parka to get him a little closer to his comic attire. That’s a big relief as I didn’t want “Smallville” to have a better looking Captain Cold than the actual Flash show. Cisco names Snart Captain Cold and with Felicity’s help, they’re able to track him down via the gun. Barry doesn’t want to talk to them though as he’s still mad at Cisco. Felicity tells Team STAR they have to be there for Flash even when he doesn’t want to be bothered.

Joe and Eddie get to Cold first and Eddie saves Joe from getting iced. Snart gets on a train and Flash quickly joins him, but Snart reveals it was a trap as he now knows Flash’s weakness — he cares about people and he’s going to have to decide to capture Cold or save the people after he ices the train and derails it. The show continues to not be afraid of properly showcasing Flash’s powers as we get a cool sequence of Flash racing in and out to save passengers before the train crashes. 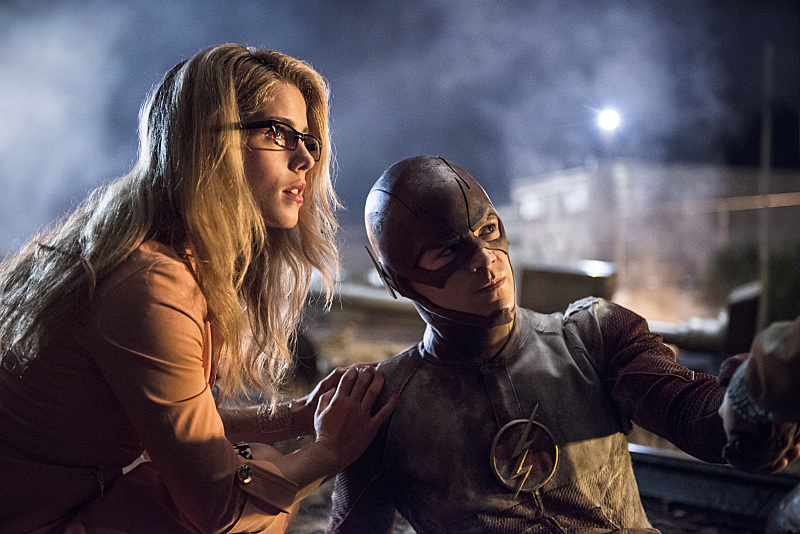 Capt. Cold blasts Flash and thanks him for making him step up his game. Just before he delivers the kill blast, Cisco, Caitlin and Felicity arrive with a super intense gun that could kill Captain Cold. Snart laughs and seems to like the name and unsure of the device, walks off. The super gun was actually a LED-boosted STAR vacuum. Barry thanks the team for coming to help him.

Wells tells Cisco to never do anything like that again in threatening “I could kill you” tone. But what was he talking about? The weapon or rushing out to try and save Flash? 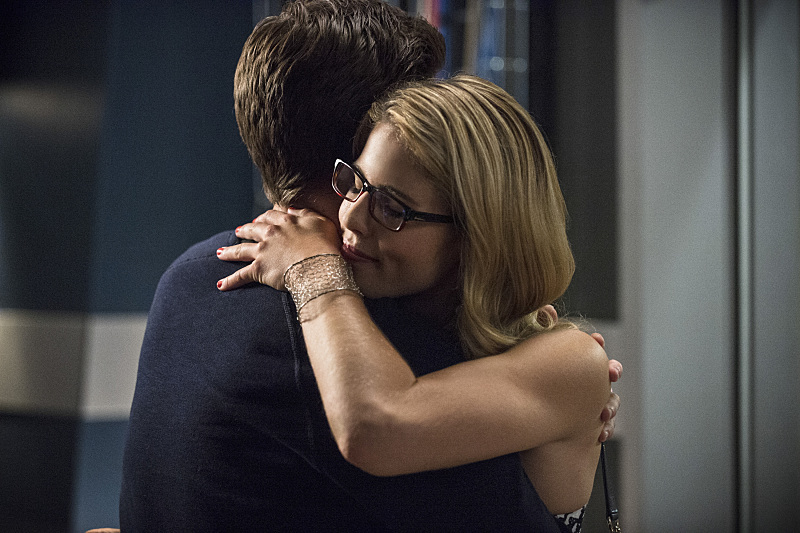 Iris tries to make good with Joe again. This time, he accepts it and tells her he underestimated Eddie. Felicity is on a train heading back to Starling City. Barry rushes in to see her. I know everyone is all Olicity, but Barcity would be soooo cute. She knows he is crushing on Iris and he says he knows she feels the same about Oliver. She says they’re perfect for each other, but they’re both into someone else, which Barry attributes to opposites attracting. A goodbye kiss and there goes that potential romance.

Post credits scene this time doesn’t feature some sinister reveal from Wells, but Snart at a Keystone Motel room. Snart’s talking to his match carrying friend(!) apologizing for the end of their former alliance. Snart says Central City has become more challenging and he needs better help so he offers the heat gun to his pal Mick so we’ve just added one more member to The Rogues with the semi-introduction of Heat Wave.

We won’t be getting another new episode until Nov. 11 so now’s a perfect time to tell your friends to catch up as we race to the mid-season mark after this mini-break. It’s been fun so far and with the reveal of Gorilla Grodd and more Rogues coming, the thrills have only just begun!