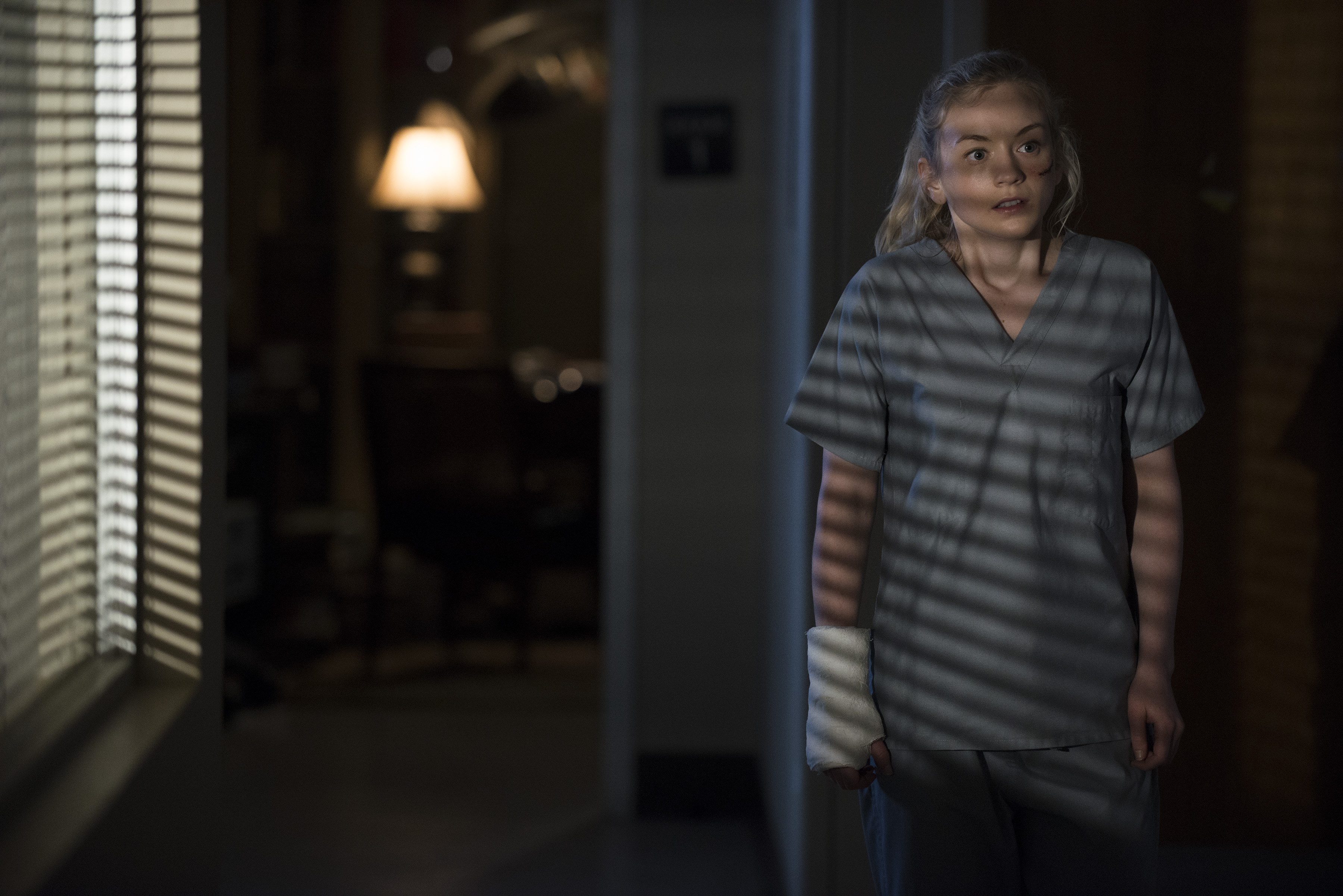 Tonight’s episode focuses on a character I’m betting most folks figured would have long since been dead, but up to this point, has been remarkably lucky. Will the reaper finally catch up to her tonight?

Last seen rolling with Daryl after the Grimes Gang got separated following the fall of the prison, Beth (Emily Kinney) was abducted and no one knew of her whereabouts until now. She awakens in an Atlanta hospital and welcomed by Dawn (Christine Woods), a police officer, and Dr. Steven Edwards (Erick Jensen).

Edwards has her accompany him to another room where he takes another patient off life support. No sense wasting valuable resources on a lost cause. The hospital seems oddly … normal with police officers, a doctor and even a janitor. This is truly the realm the walkers forgot. Since going outside is too risky, Edwards shows Beth the body dumping area – the elevator shaft. The hospital even has a cafeteria. Don’t eat the meat Beth! Wait, this product isn’t from Terminus Farms Co.

Dawn and her officers bring in another patient she desperately wants saved. After Edwards explains there’s no chance of helping the victim, she takes out her aggression on Beth and rips out her face stitches. Dawn and company bring in a woman, Joan (Keisha Castle-Hughes), who tried to escape the hospital previously. She gets her arm cut off to prevent her zombie bite from spreading. Beth is having a very traumatic time here, which is a bit odd considering her dad lost his foot due to a bite and ultimately his head in a later battle so you’d figure she’d be a bit more battle-hardened. 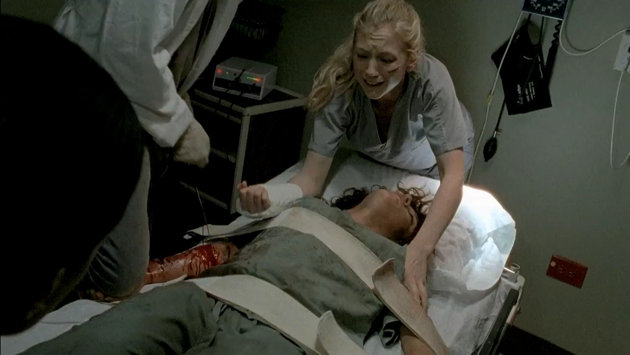 Beth meets Noah (Tyler James Williams, “Everybody Hates Chris”) the laundry guy, a kindred spirit who understands the dynamics of the hospital system.

Dawn explains to Beth how things run — if you take, you give back and once she’s worked off her hospital bill she’s free to go. Of course, then she also has to pay for her food, clothes, etc. so getting out could take a lot longer than Beth hopes. This is a very different new world order then we’ve seen so far on the show with in essence, a plantation prison system set in a hospital. It’d be a particularly meaty backdrop to toss Carol, Maggie, Michonne or Sasha in, but with Beth — the show’s weakest female character (not ready to count Tara as more than walker-bait just yet) — it’s not nearly as captivating.

Gorman, one of Dawn’s officers, lets Beth know he wants to get into her scrubs, but Edwards makes the save and reminds Gorman how powerless he is if he comes down with an infection or gets bitten. Edwards shows Beth the outer gate, which is swarming with walkers to explain why he hasn’t left yet, and asks her to give a patient some medicine. Either Beth didn’t pay attention while Herschel was medicating the animals at the farm or she doesn’t listen very well as the dose kills the patient prompting Dawn to get very agitated and question Dawn’s worth in this new walker world.

Beth realizes she’s on shaky ground and hatches an escape plan with Noah. She heads off to Dawn’s office to steal her keys and sees Joan’s body, the result of a suicide, on the floor. Gorman catches her, but Beth fights him off enough to let walker Amber kill him off. That’s more than enough of an opening for Noah and Beth to rappel down the elevator shaft and attempt their getaway. Beth goes all Daryl Dixon on the walkers with Gorman’s gun. Noah makes it through, but Beth gets caught by Dawn’s officers. 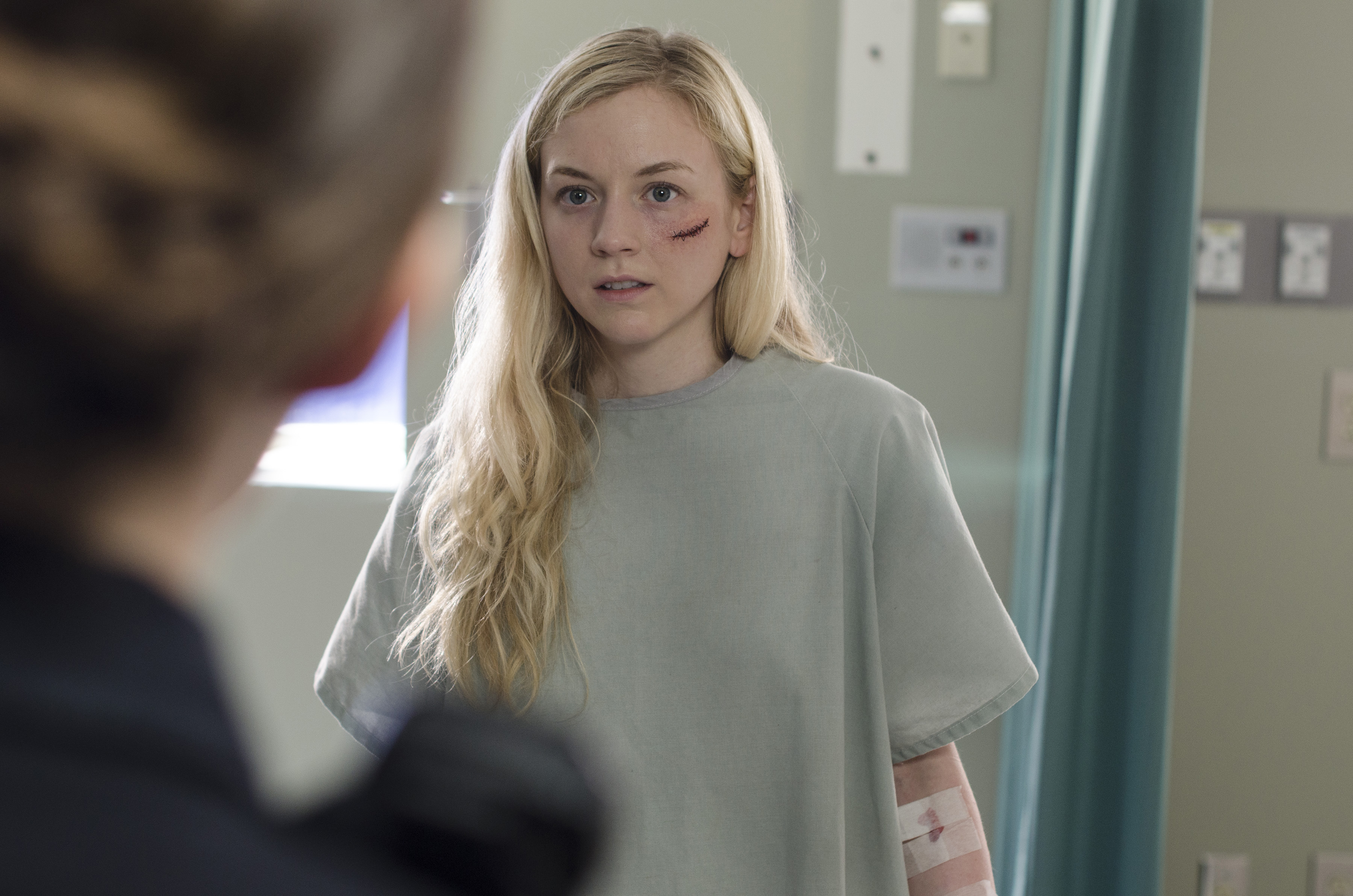 Beth tries to reason with Dawn that no help is on the way, but that just leads to another slice in the face. She awakens and asks Edwards why he told her to give the patient the wrong medicine. He was another doctor and Edwards wouldn’t be nearly as invaluable then. Beth has grabbed a scalpel and looks prepared to fight her way out when the officers wheel in a familiar face. Carol is on the gurney and has arrived in slabtown.So looks like that means Noah is the person trailing behind Daryl from last week’s cliffhanger. But how did Carol get so banged up that she needs medical attention?

After three extremely exciting, action-packed episodes featuring the full ensemble, it seems a bit risky to devote an entire episode to one of the show’s least interesting characters. And while it’s short of a filler episode, there’s more excitement in the potential for next week’s episode than anything that occurred in this outing so don’t feel too bad if you missed this one.