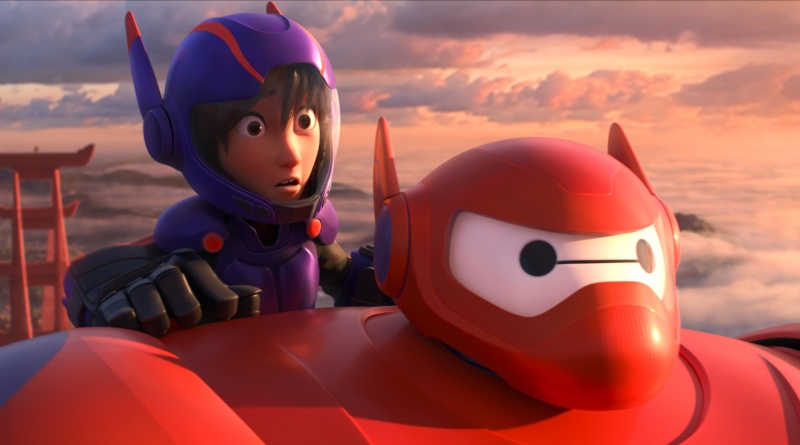 Since acquiring the Marvel Comics license, Disney has been content in letting Marvel Studios have all the fun with one big live-action blockbuster after another,  but Big Hero 6 marks the first team-up in Disney’s specialty that will leave you completely satisfied with its service.

The film is very loosely based on the 1998 Marvel Comics title, but this is a case where departing from the source material only makes for a much better movie.

Hiro Hamada (Ryan Potter) is content hustling in bot-fighting contests until his older brother, Tadashi (Daniel Henney) brings him to his “nerd school” and learns Tadashi and his friends aren’t elbows deep in textbooks, but working on revolutionary technology that could change the world. Hiro is most enamored with Tadashi’s creation, Baymax (Scott Adsit), an inflatable robot whose primary function is health care.

Moving like a chunky kid through a tight hallway, Baymax’s mannerisms are humorous on their own, but Adsit finds a great robotic, yet cheery, tone, for Baymax. In the comic, Baymax is a synthetic dragon and hardly the hug-able character from the film — just one of several changes for the better to improve upon the source material.[irp]

Despite Hiro being a genius, screenwriters Jordan Roberts teaming with Monsters University scribes Daniel Gerson and Robert L. Baird, show him having to exert himself and work hard in order to enter the university. In a lot of these comic book style films, everything comes perhaps a bit too easy for the hero and it was a nice switch to show the main character putting in actual effort to accomplish his goals.

But before he can make good on his vast potential, a masked villain steals Hiro’s tech, prompting Hiro to upgrade Baymax and his pals so they can save the city.

Like most Disney films, the animation is stellar and the character designs lively. The film is set in San Fransokyo, a futuristic hybrid of San Francisco and Tokyo, which allows for a visually-exciting landscape.

There’s a lot to like about the character portrayals as well. Honey Lemon may look a bit ditzy, but she’s no airhead and refreshingly, neither she or Go Go spend a second fawning or even talking about a guy. They’re no slouches when it comes to the action either as they’re both fully capable combatants and don’t constantly require saving. Wasabi, whose ethnicity was changed to add some welcome diversity, may look like a bruiser, but he’s much more comfortable using his brains to tackle a problem than his fists.

The script is packed with lots of funny moments that will charm both parents and children without seeming derivative of other family-geared films.

Some of the thunder of the flying scenes have been stolen by the spectacular aerial sequences in How to Train Your Dragon 2, but it holds its own.

You can spot the Marvel Studios DNA throughout from the eclectic band of outsiders uniting, the post credit appearance of  a Marvel fixture to the near-city leveling final battle. The intense climactic battle may be a bit much as it loses the balance of humor and comic book action, but its an indulgence inherent in many comic book movies so it’s hard to knock off too much for that.

Big Hero 6 is the most fun, family superhero film since The Incredibles and will serve as a perfect introduction to the live-action Marvel Studios blockbusters for younger viewers.