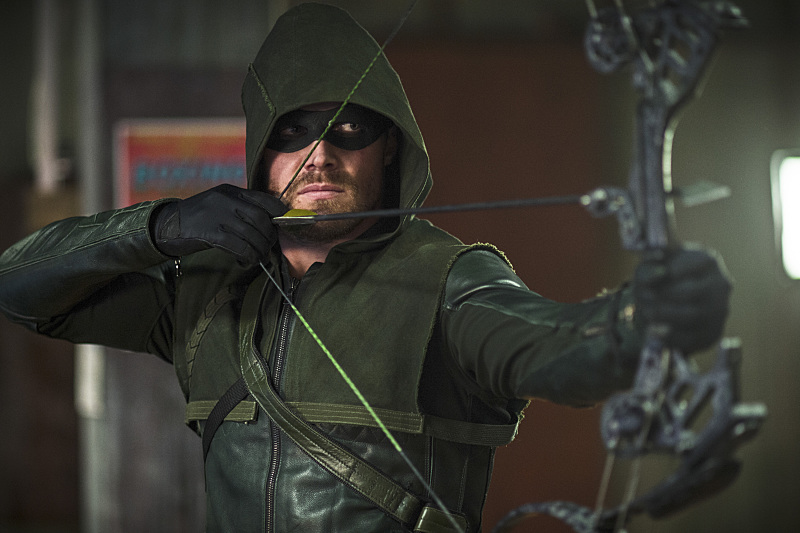 Oliver learns a valuable lesson about the mentor/sidekick bond, but after Roy’s shocking revelation, does this episode mark the “Death of the Family” for Team Arrow?

Things are off to a good start for the team as Arrow, Roy and Diggle are en route to stop a drug bust with Felicity providing intel at HQ. Roy’s fatigue is making him forgetful about his assignment on the mission, but Arrow is taking a more nurturing approach with him. While I know Canary’s new costume is all the rage, I’m hoping the designers will whip up something for Diggle beyond a robber mask. Doesn’t tenure on Team Arrow count for anything? 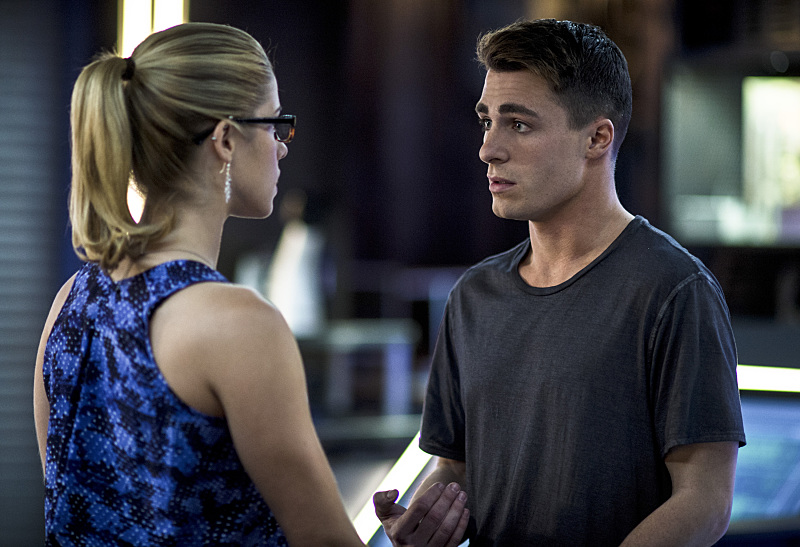 The guys arrive too late and find the drug gang already taken out with “Guilty” sprawled in blood along the floor. There’s another vigilante out there and this one plays for keeps.

One of the highlights of this week’s episode is how Oliver getting the hang of this whole mentor thing. His relationship with Roy is less father/son like the comics and more big brother/younger brother so it was good to see Oliver taking a proactive role in making sure his partner was OK even if that means telling him to take the night off and rest.

But since we know sleep won’t come easy for Roy, he has Felicity test him for Mirakuru and shares that he’s having visions of being possessed and killing Sara.

We return to Hong Kong this week in the flashback section where Maseo (Karl Yune) are carrying out more of Amanda Waller’s dirty work. This time, they’re tasked with retrieving a document that could lead to the whereabouts of China White. In actuality, the whole point of this flashback is to show a meditation technique Tatsu (Rila Fukushima) teaches Oliver, which becomes important later. 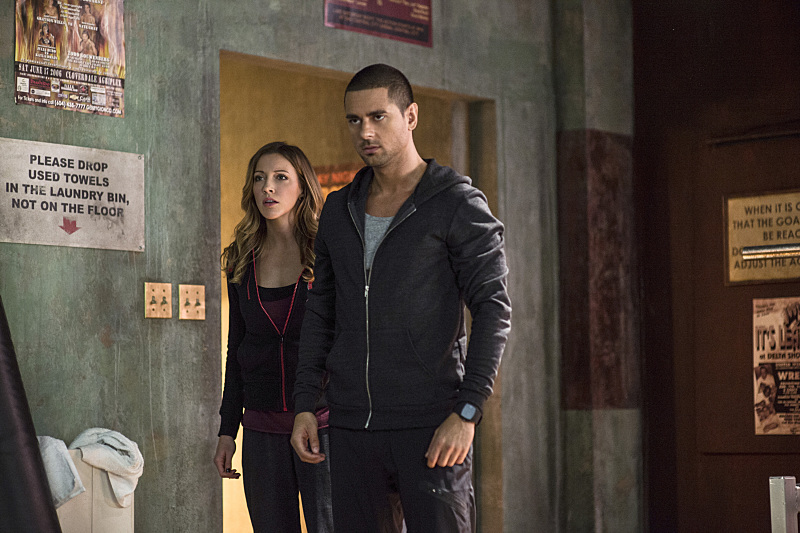 Arrow finds another body with the “Guilty” blood drip, but this time it’s at Ted Grant’s gym. Laurel can vouch for Ted’s alibi since they were training and went to get dinner afterwards. Arrow looks like the parent who just found out his child went to the other parent to get what he already said “no” to — Laurel,  you’re in troubbbble.

Investigating another possible lead after slipping a tracker on Ted, Arrow finds Ted’s old warehouse filled with his own vigilante memorabilia. Ted comes in and the two fight it out for a bit before Arrow ends it with the boxing glove arrow! Oh “Arrow,” it’s like you speak fanboy. Ted tells Arrow he used to be a vigilante, but kept a lower profile. He’s been off the circuit after a murder case against him was dropped. Arrow is having some serious trust issues with Ted and warns Laurel not to go around him again.

In hopefully the first of many team-ups, Arrow and Ted go to another spot and are confronted by Ted’s old partner, Isaac Stanzler (Nathan Mitchell), who manages to get away before they can catch him. Ted isn’t so lucky as the police arrest him for the body at his old vigilante base. 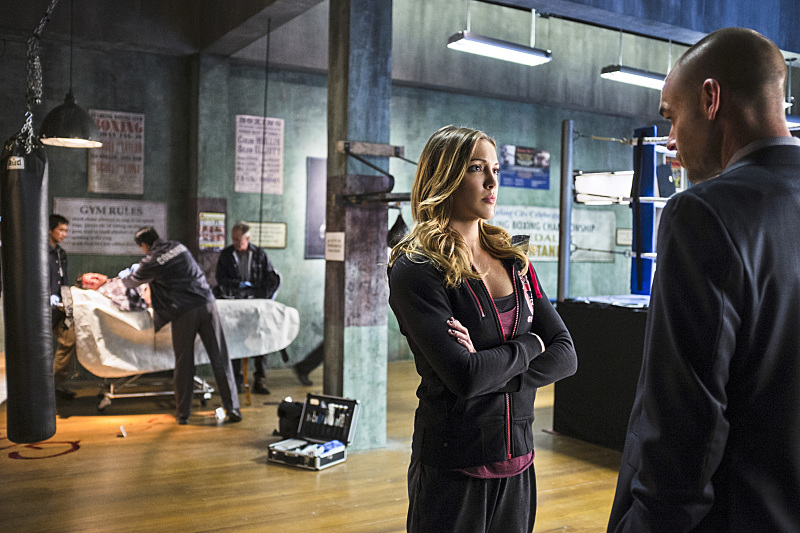 Roy wants to share some news with the others. He thinks he killed Sara. Felicity still isn’t sure, but the arrows pulled off of Sara didn’t have any traces of Roy that she could conclusively determine. Laurel doesn’t want Roy’s apology and he leaves to wrap a very strong scene with the hint of Team Arrow fracturing.You’ve gotta commend the writers for their pacing. That’s something that would have been dragged out for months on a lot of shows, but we get an immediate followup the next week.

Laurel learns that Isaac killed the gang member prompting Ted to retire. Diggle questions Oliver’s double standard of justice as he votes for Oliver ditching Roy and bringing Sara’s killer in. It was a convincing argument, but Oliver isn’t so quick to agree.

Ted is released, but Isaac forces Ted and Laurel into a car at gunpoint. Laurel is slowly becoming more sure of herself and calls Felicity, allowing for Team Arrow to trace the car. Arrow and Diggle strike out at stopping the car, but Roy distracts Isaac long enough for Laurel to quickly shift direction and send Isaac flying out. Fittingly, while Diggle and Arrow rescue Laurel and Ted from the crashed car, Roy fights Isaac in a sidekick battle. Isaac says Roy is just a tool and will be discarded once Arrow is done with him, but Roy is able to use his cool kick flipping moves to take out Isaac. Roy tells Arrow not to abandon him and Arrow replies “Never.” With that one statement, we know Oliver isn’t gonna give up on Roy even when his pal could have killed his ex-girlfriend. 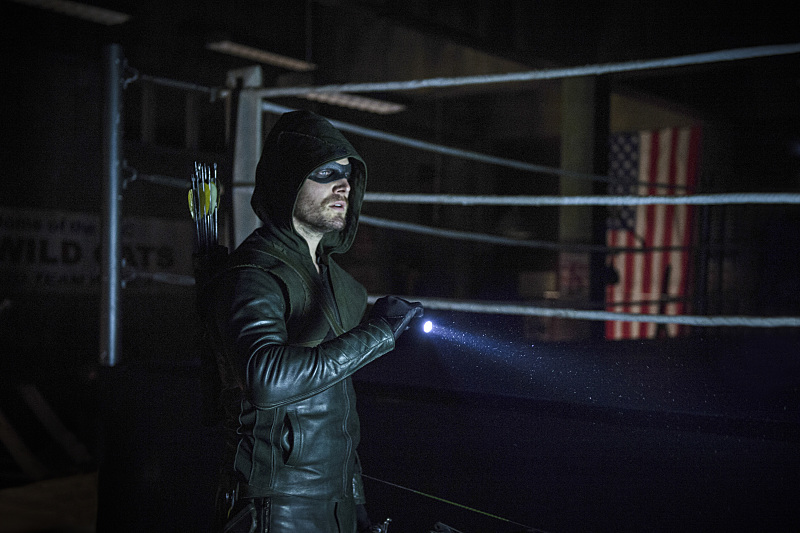 Arrow visits Ted to try and convince him not to continue training Laurel. Ted advises Arrow to ditch Roy, but Arrow says Ted’s mistake was losing faith in Isaac.

Back at base, Roy is admiring his outfit one last time. He remarks how Isaac said he was just another weapon in Arrow’s Arsenal. Oliver likes that and says that’s what they should call him. Making good on his earlier promise, Oliver asks Roy if he trusts him and uses the same meditation technique Tatsu taught him. Through that exercise, Roy learns the truth — he didn’t kill Sara with arrows, but he did kill an officer with arrows while under the Mirakuru influence and just remembered seeing Sara during that instance leading to his distorted memory. Some people may call that a cop-out (no pun intended) revelation, but it was a perfect comic book cliffhanger and payoff.

Two officers are leading Isaac out when they get incapacitated by arrows. Isaac looks up at a redhead aiming her bow and he asks who she is and gets the quick reply of “Cupid, stupid,” before she unleashes her arrow. In the comics, Cupid is obsessed with Green Arrow and tries to take out his enemies and allies to prove her love to him. 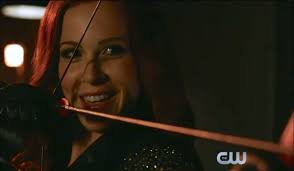 It’ll be interesting to see where this goes next week. Having Cupid kill Canary may be too out of left field, but it’s been fun having an actual mystery play out this season. Now if we can just skip the HK flashback next week we’ll be all set. Who’s your bet on who really killed Sara?