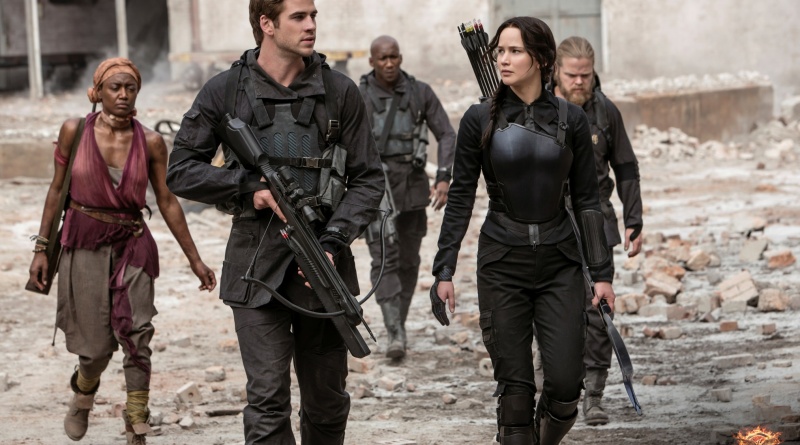 “The Hunger Games: Mockingjay – Part 1” skips the exhilarating games of the first two installments in the series and matures into a more thought-provoking blockbuster. It’s a risky move that (mostly) works thanks to its impeccable cast, confident direction and well-developed characters that further distances the franchise from its would-be YA competition.

While the first sequel, “Catching Fire,” was an excellent follow-up, there was an admitted feeling of déjà vu as the film was more or less an all-star version of its predecessor. “Mockingjay” is a different experience altogether.

Hoping to quell the rebellion sparked by the defiant actions of Katniss Everdeen (Jennifer Lawrence, “X-Men: Days of Future Past”) at the last Hunger Games, President Snow (Donald Sutherland) has the Capitol forces destroy District 12.

Those survivors, including Katniss’ mother, sister and best friend, Gale (Liam Hemsworth), have now taken refuge in the underground shelter of District 13, home to the rebel effort led by President Alma Coin (Julianne Moore, “Non-Stop”). Coin’s been waiting on the right moment to strike against the Capitol and Plutarch Heavensbee (the late Philip Seymour Hoffman) assures her that Katniss could be the face of the rebellion — the Mockingjay. 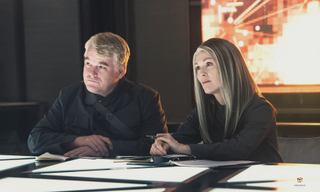 Katniss is game to be the figurehead provided Coin agrees to rescue Peeta (Josh Hutcherson) and the other captive tributes as soon as possible. Snow also recognizes the value of a propaganda tool and has Peeta call for a cease-fire. Screenwriters Peter Craig and Danny Strong make an interesting analogy to war’s crushing affect on a nation, the potential PTSD for the soldiers and in Katniss’ case, literally not being able to go home again.

The film calls for Lawrence to be less new female action hero and tap further into her dramatic side — hardly an issue for the Best Actress Oscar winner, who makes Katniss a genuinely compelling and conflicted main character.

With the absence of the Games, Director Francis Lawrence doesn’t have the lush, frequently evolving landscapes to play with the action scenes carry far greater consequences beyond the scope of mere “games.” Lawrence is able to work in one beautiful action sequence reminiscent of that fantastic skydiving scene in “Godzilla,” but it’s the only significant action scene not spoiled by the trailers.

As little emphasis is placed on the opulence of the Capitol, there’s no signature showcase of the tributes or Capitol inhabitants meaning “Catching Fire” costumer Trish Summerville unfortunately wasn’t needed to whip up extravagant outfits as the characters stick to drab, utilitarian black attire to embody the film’s bleak tone.

The franchise continues to boast one of the better ensembles with Moore, Mahershala Ali (“House of Cards”) and Natalie Dormer (“Game of Thrones”) making solid additions to the cast. Hemsworth gets to assert Gale much more than the guy pining for Katniss while Sam Claflin shows the darker, inner turmoil of Katniss’ ally Finnick Odair.

Pity the filmmakers for trying to move forward without Hoffman as, per his usual; he’s brilliant in the role of Coin’s political strategist. Fortunately, Woody Harrelson and Elizabeth Banks remain on hand to continually enhance scenes in the film’s rare lighthearted moments as Haymitch and Effie struggle to adjust to life outside The Capitol.

The biggest downside, and it’s an obvious one given the title, is the film feels padded at times to accommodate the upcoming second chapter. There’s a sense that those non-essential plot points in the first two books – The Hunger Games (Book 1)

and Catching Fire (The Second Book of the Hunger Games)

– were taken out of the film adaptations to streamline the viewing experience. There’s no such careful editing here. In a way, it allows Francis Lawrence to let the film “breathe” a bit more. You feel the toll the war has waged on the districts and its citizens, but the film never fully shakes the notion that it’s just one long set-up for next year’s conclusion.

For some, “Mockingjay – Part 1” is going to be an unsatisfying tease for next year’s finale, but this installment proves a tremendously engaging set-up for the conclusion to one of the best franchises this decade.

See how the movie compares to the book: