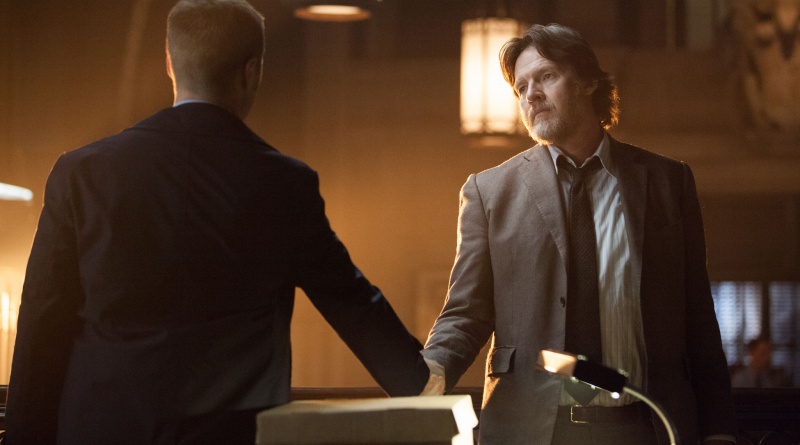 Gotham has had a mixed first half of its debut season with some good (Penguin, Bullock) bad (Barbara, Montoya & Allen, Barbara because she’s so bad it’s worth mentioning twice) and some we’ll let it play out some more moments (young detective Bruce and the ever-present Kat/Selina). Tonight’s fall finale finally felt like everything came together to give us a potential glimpse of a better second half when the show resumes in January.

Kat is still teaching Bruce how to overcome fear, but starting off small by having him stand on the stair railing. She keeps suggesting a kiss, but Bruce is already proving smart with women as he says he doubts Kat wants to kiss him for purely innocent reasons. Then he shows he’s still got a lot to learn in the ways of talking with a female by saying he didn’t think she liked people all that much. That ticks Kat off and she’s ready to run off somewhere when a trio of assassins invade the mansion to get Kat.

For the hints dropped so far this season, it was fun actually watching Alfred fighting off the attackers, shrugging off a gunshot to the arm and managing to kill one of the assassins while Kat and Bruce get away. One of the assassins is Larissa Diaz (Lesley-Ann Brandt) aka. Copperhead, a longtime Batman enemy, but you’d literally have no idea that’s who it is since she’s just wearing a standard black leather outfit as opposed to the full body snake outfit.

As they’re responding to the case as the only two cops in Gotham, Gordon and Bullock try to get details from Alfred, but it escalates into another arguing match between the partners once Bullock learns that Gordon was keeping so many secrets from him regarding Kat. Alfred gets them focused and Gordon figures Lovecraft sent the assassins and wants to track him down to back off while Bullock and Alfred head out to work Bullock’s sources.

On the mob front, Falcone is not happy that someone got to his reserve funds and brought in Penguin to learn why he didn’t tip him off of Maroni’s plot. Penguin assures Falcone that the culprit is a mole in his camp and questions why Fish is still running around to plot against him. That’s a fair question. Falcone thinks Penguin is blinded by his hatred for Fish. Yeah, but why is Penguin good enough to trust in the plot to take out Nikolai, but not Fish? I get that Fish is a major cast member so it’s a moot question, but the writers keep writing Falcone maddeningly inconsistent. One week he’s Michael Corleone in skillfully out-thinking his enemies and the next, he’s Fredo and is blind to everything going on around him.

Then in the next scene, Falcone kills one of his main henchmen in the midst of a “family” meeting. This was some hardcore Robert De Niro as Al Capone in “The Untouchables,”

but again, Falcone seems oblivious to Fish’s scheming even as two more of his lieutenants seem disgruntled about his plans to raise their rates to replenish his reserve fund.

Bullock and Alfred go to Bullock’s sole source — Fish — and after Alfred punks Butch out by throwing him to the ground and putting a knife to his throat (go Alfred!), Fish agrees to help them. She’s heard about Harvey Dent eyeballing Lovecraft for the Wayne murders and Kat’s connection to it as well. Looks like Harvey’s plan didn’t go as smoothly as planned. Gordon goes to Dent, who admits leaking his name out to select sources to make the Lovecraft news more credible. This is a major violation of trust there and it’s kinda disappointing Dent so quickly screwed Gordon over. The guy already has enough trust issues at it is and this won’t help.

Just like last week, Bruce and Kat steal the show as their interactions feel less forced and are foreshadowing in a good way their complicated adult relationship. Kat admits the assassins were after her and tries to ditch Bruce, who follows her — even across a rooftop.

As Kat watches in disbelief and Bruce prepares to jump, this felt like our first genuine young Batman scene as an adversary thinks they’ve gotten away only for his persistence to win out. They travel to a runaway hideout where they run into Ivy, who we’re at least supposed to think will one day drink her milk and be big and strong and become Poison Ivy. Ivy is very odd and even manages to creep out Kat, who is normally unaffected by anyone.

Gordon does manage to track Lovecraft down in one of his mistress’ getaway spots. He starts confessing to Gordon and right by a window and I’m already counting down before the sniper bullet takes him out. That doesn’t happen though as Copperhead and her other associate come in. Copperhead puts Gordon down with a choke-hold and when he awakens, Lovecraft is dead in the tub from a bullet to the head.

Kat and Bruce make it to her fence, Clyde, who sells them out to Copperhead. Just as Copperhead and crew go to get Kat, Gordon, Bullock and Alfred arrive. Copperhead nearly corners Kat and Bruce, but he runs in the other direction to give Kat enough time to escape out the window. Alfred arrives and Copperhead decides to cut her losses and run off.

Kat returns to Wayne Manor to give Bruce back the objects she tried to fence with Clyde. She shows him the box she stole earlier and as he’s trying to figure out when she took it, Kat kisses him. Bruce doesn’t seem to hate it…

Back at police headquarters, Mayor James is chewing out Gordon and Dent for their botched handling of the Lovecraft case and he’s going to fix this situation by saying Lovecraft killed himself period. Gordon, the unwavering and at times dense stubborn do-gooder that he is, tells James exactly what he thinks landing him a security detail at Arkham Asylum. That has a lot of fun potential for Gordon and should offer up more future Batman villains they can explore. So 10 episodes down, what do you think of “Gotham” so far? Will you be back for the winter premiere or have you seen all you need to?