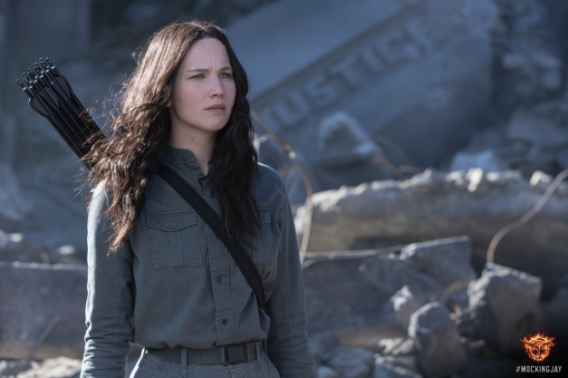 1. The Hunger Games: Mockingjay – Part 1 – $56.8 million [2nd week; $225 million] – Jennifer Lawrence’s third Hunger Games maintained its dominance and easily retained its box office crown for a second weekend. Factoring in Thanksgiving tallies, the film earned $82.6 million over the last five days. While “Mockingjay” failed to measure up to the lofty opening of the first two films, its second weekend cruised to an easy win. “Catching Fire” has the highest Thanksgiving week performance with $110 million but “Mockingjay” had the third highest and held a very strong 53 percent from its opening week. Worldwide, it’s already earned $480 million. It should retain its top spot until mid-December when the final installment of “The Hobbit” trilogy arrives in theaters.

,” which was looked at as a major bomb, opened to $23.7 million in 2012 on its way to a gross of $103 million domestic total. Not doing much better isn’t a good sign for “Penguins” and its performance may have something to do with the third film on the Top 5.

3. Big Hero 6 – $18.7 million [3rd week; $167 million total] Disney’s biggest hero continues to fly with audiences and it held up well despite direct competition with “Penguins,” nearly splitting the coveted family audience money. Not bad for a film that’s on its third week in theaters. In another two weeks, it will surpass Wreck-It Ralph (Blu-ray 3D/Blu-ray/DVD + Digital Copy)

” [$400 million] among the post-2005 November animated films from Disney Animation.

4. Interstellar – $16 million [3rd week; $147 million ] Also holding up well is Christopher Nolan’s space drama, which didn’t have the benefit of 3D or a popular franchise to lure audiences in with besides the impressive pedigree of its director and award winning cast.

, which earned $28 million in 2011. I still liked it, but this clearly indicates we won’t be getting a third installment.