Looking back, the fall finale of Season 5 didn’t need some major status quo shakeup like The Governor’s invasion of the prison. It didn’t need an action movie shootout as we’d already gotten that earlier this season with the escape from Terminus subplot. We didn’t even need a big shocking twist or a massive body count. All that was needed was the loss of two significant characters this season.

After ambushing Sasha, crooked cop faction Bob is attempting a getaway. He’s just got two things working against him. He’s still zip-tied and Rick is the one after him. Tyrese would try and peacefully bring Bob back in, Sasha may slap him around a bit and Daryl might only shoot an arrow at his leg, but Rick? Yeah, he ironically ends up ramming Bob with a cop car before getting out and shooting him in the head. The negotiations will just have to be short one officer. 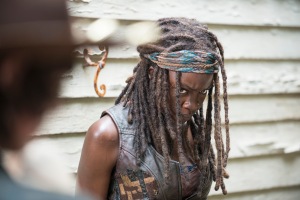 For those (like me) complaining about a lack of screen time for Michonne to do what she does best, this episode finally delivered some sword-slinging action for us courtesy of our favorite fallen priest Gabriel. He’s limping after stepping on a nail while leaving the boarded up church last week and comes across what looks to be Grimes Gang/Sasha’s lover version Bob’s leg — left on the grill by Gareth and the Terminus crew. He lingers just long enough to prove too tempting for the walkers trapped in the school and they smash the windows to chase after him. Thanks to his bum foot Gabriel isn’t able to completely outrun them and opts to return to the church screaming desperately for Carl and Michonne to let him back in. This would be a poetic death for Gabriel, who offered no such relief when others were banging on the church doors to escape the walkers, but Michonne and Carl bust down the barricades and help him.

Gabriel now sees clearly and leads them to the escape hatch he created with the machete. After narrowly escaping, they get back to barricading, this time sealing the walkers inside the church while they hope the doors hold. But just as the walkers begin breaking through the makeshift barricade, Abraham barrels the fire truck into the entrance way to keep the walkers in. Michonne is happy to see her old comrades and gives Maggie the good news that Beth is still alive and being rescued by Rick and the others. 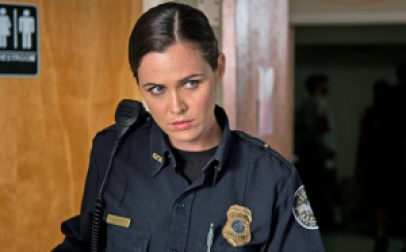 Back in Atlanta, Beth is still trying to find her place in Slabtown. The officers are still treating the wards horribly and she’s powerless to really bring about any lasting change besides finding satisfaction that Noah managed to escape. Dawn squashes that hope saying that everyone comes back eventually and explains that Beth owes her for not letting her get stuck with the cop killer label after Beth’s efforts led to Gorman being killed. Unfortunately for both of them, officer O’Donnell overhears their conversation leading to a hallway brawl that ends when Beth and Dawn manage to send him into the walker filled elevator shaft.

Dawn finds Beth in Carol’s room, still unconscious after being hit by the car. Beth says she understands how things work now. Gorman was a problem and Beth became an easy scapegoat and the same with O’Donnell. Dawn insists that neither left the world any poorer without them in it and that she is not using Beth. Since “Slabtown,” most of the Beth/Dawn interactions have been redundant as the point has been made clear — Dawn is struggling to keep control of her officers and Beth is vainly trying to appeal to Dawn’s morals.

Rick (with Daryl, Sasha and Tyrese on rooftop sniping duty) meet more of Dawn’s officers and negotiate terms of a treaty — Carol and Beth for Dawn’s two officers. Best highlight of the episode: Dawn’s officers ask where Rick’s friends are and Sasha snipes out a walker leading to his “Oh, they’re around” response.

It’s prisoner exchange time. Yep, don’t see this going bad at all… Showing that she’s learned from her apprenticeship with Daryl, Beth slides a pair of scissors in her cast. Everything is going just fine with the exchanges. Carol goes over and Beth goes over with no problem until Dawn says she wants Noah back. Rick, predictably, isn’t having that and Dawn insists as Beth replaced him as her ward and with Beth gone, Noah has to take her place. Noah realizes just how tenuous this peace treaty is and begins to walk back over to Dawn when Beth hugs him. Dawn can’t resist gloating a bit whispering that she knew Noah would be back and that’s enough to push Beth past the breaking point. She pulls out her scissors and stabs Dawn in the chest. It’s not a kill shot though, which allows a stunned Dawn enough time to shoot Beth in the head and quickly takes a bullet to the head herself courtesy of a tearful Daryl.

The whole Grimes Gang is either crying or fighting back tears, but are prepared for a shootout. Officer Shepherd, one of Rick’s prisoners, orders the officers to put their guns down saying this issue died with Dawn and Rick’s group is free to go. Taking it a step further, Rick offers sanctuary for anyone who wants to leave, but only Noah takes him up on the offer. 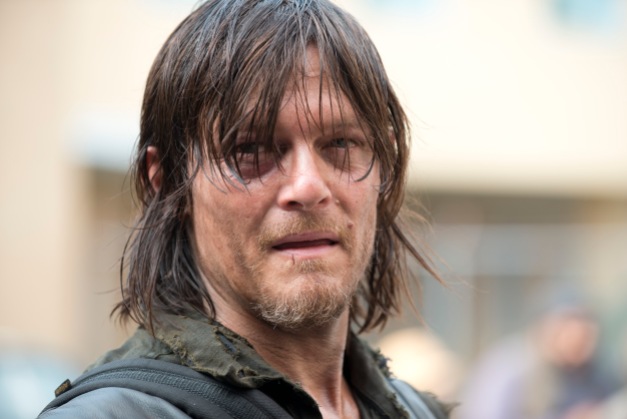 And now it’s time for the real heartbreaking scene of the episode as Abraham and the cavalry arrive at Slabhouse ready to help the rescue Beth efforts. Rick emerges from the hospital first and shakes his head to warn them and one by one Maggie sees her friends coming out with sad faces until she sees Daryl carrying her baby sister and last surviving relative. Has anyone else had it rougher on the series than poor Maggie? She can’t catch a break!

In the post-credit scene, Morgan (whom Rick first encountered after the initial outbreak), has been in close pursuit. By the end of the episode, he’s made his way to the church and sees Abraham’s message that the new world is going to need Rick Grimes.

This episode definitely didn’t clear the decks and dramatically shift anything, but I’m glad the show is moving past the hospital. It was such a promising setup with police officers abusing their powers under the guise of protection, but it just never fully clicked. Dawn was crazy, power mad or just simply over her head, but maybe she would have been better as a one-note villain as opposed to the conflicted sorta bad guy/sorta sympathetic character we got instead.

Following the initial intense first three episodes with the Terminus subplot, the show was on fire and cooled off a bit with the draggy, dull hospital arc. Moving on from the hospital and Morgan reuniting with Rick should definitely help get the season back on track.

Masters of the Universe Grayskull Playset