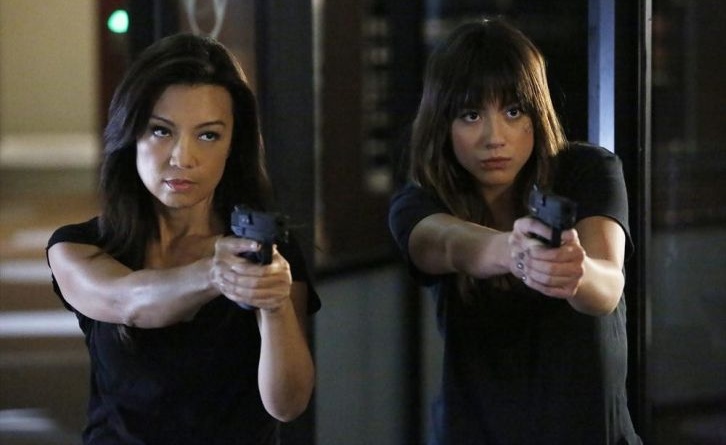 This one will be quick this week. After the fun that was “Flash vs. Arrow” tonight, I wasn’t expecting much by way of competition from AOS, which set up a number of significant events in advance of next week’s winter finale. Here’s the highlights:

Dreamy days: Skye dreams she raided Raina’s closet wearing a flower dress and sees Coulson and May wearing what appears to be 1950s attire as they abandon a baby who may or may not have been a young Skye.

Coulson splits the team again to tackle two missions. The San Juan team of Coulson, Morse, Mack and Fitz/Simmons will investigate the hidden city underneath San Juan, which may be the secret city referenced in the carving map, while Skye, May, Hunter and Koenigs (Billy and Sam) head to Vancouver to bring in Raina.

Skye and May watch the news report on Christian Ward’s death and both conclude that their former teammate (Grant) Ward was responsible. Simmons and Fitz continue avoiding each other and both Mack and Morse call them on it. Simmons wants her best friend back evidenced by a slight return of some light flirting with she and Trip who’s still on the mend after encountering the Doctor.

[irp]Any episode where Coulson gets to interact one on one with a SHIELD member gives us at least a few memorable quiet moments. This time, he takes Morse and as they stroll along San Juan he reiterates that his tactics vary substantially from Nick Fury. It’s unclear if Morse favors Coulson’s style of leadership however.

In Vancouver, Raina is manipulating another sap when Evil May aka Hydra’s brainwashed Agent 33 finds her. Raina flees in time to get saved by first Eric Koenig and then Sam Koenig who hides her under a stealth umbrella. From there we get a very well choreographed battle between Skye and Agent 33. Skye has proven to be an attentive student to May as she hangs with Agent 33 until Hunter can help her out. Raina learns Hydra has the Obelisk and tells Skye that the blue angels, the Kree, use the Diviner/Obelisk to determine who is worthy. Back on the Quinjet, the Koenigs joke around with Trip although like him, I’m wondering why we haven’t gotten a straight answer on the whole dozens of Koenigs running around SHIELD.

Just as Skye realizes Coulson’s team is in serious danger traveling down to the city, Mack heads down into it. The lighting for this scene is great and gives that horror movie sense of dread. Before Skye can get a message off to Coulson’s team, Hydra has found them courtesy of Raina’s tracking device and here to bring her back is Whitehall’s top man – Ward.

Ward promises no one will be harmed if they give up Raina … and Skye. He’s still intent on honoring his pledge to reunite Skye with her father. The Koenigs don’t want to deal and one of them is itching for payback after Ward killed one of their “brothers,” but Tomax calms his twin down and eventually Skye goes along. Raina hits a real jerk move and reminds Skye to bring along the map of the city as well. As she switches sides with the wind, I’m surprised either side would waste time with her and I’m seriously hoping she is written out of the show soon.

Mack touches something at the end of the shaft that lights up and literally leaves a mark in his hand, triggering an unstoppable berserker rage on his teammates. Morse doesn’t want to hurt her old friend, but after the stun gun Icer doesn’t work, Coulson tells Fitz to take Mack down. I hate the either/or prospects of these face offs. Shooting Mack in his leg puts him down without killing him. Morse manages to use a Tazer-like feature on Escrima sticks, but it results in Mack falling back down the shaft. If he’s still possessed, he should be fine. If not, Fitz is gonna need another buddy to vent to about Simmons.

Post-credit, Agent 33 tells Whitehall about Ward going off book with the plans and he orders his team to shoot down the Bus once and for all. Looks like it’s all about to hit the fan with next week’s mid-season finale. Gotta figure not all the agents will make it back out alive. Besides Mack, who else do you think won’t be back in the spring?