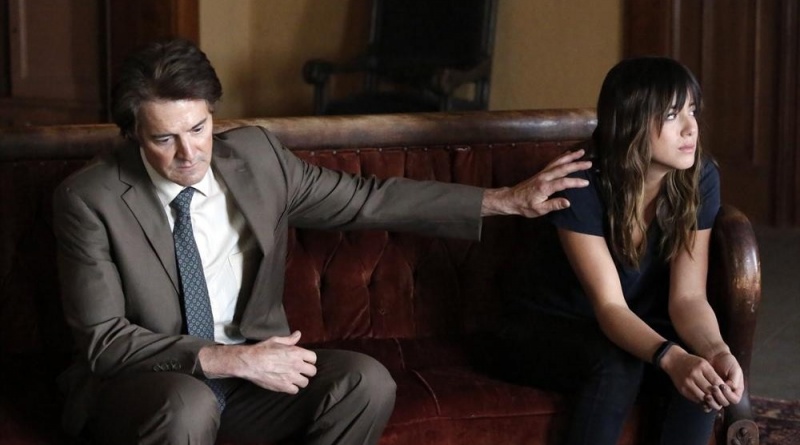 Through most of its first season’s underwhelming first half, the writers had this unhealthy fascination with Skye, the lone non-SHIELD agent of the main cast. With a grating 90s hacker-girl persona and flippant attitude, the focus on Skye was annoying, especially considering the more interesting Agent Coulson and Agent May were stuck all too often letting the newbie save the day.

But after the big series game-changer with “Captain America: Winter Soldier,” AOS got better and in no small part because Skye stopped being the focus. Tonight’s winter finale tried its best to undo all of that hard-earned goodwill with a Skye-heavy episode that annoyingly looks to have killed off one of the show’s better characters in easily the season’s most frustrating episode.

Picking up from last week’s cliffhanger, Whitehall orders the Hydra jets to shoot down The Bus. May pulls an Obi-Wan circa “Attack of the Clones” by releasing spare parts to fool the heat-seeking missiles and going into stealth mode. Trip is impressed and marked a good use of the episode’s heavy special effects budget.

At camp Hydra, the Doc is emotional as Ward brings Skye to him. He introduces himself as Cal (so he could still very well be Calvin Zabo, Marvel Comics’ Mr. Hyde). Skye is upset that she was held at gunpoint for the reunion, but is clearly curious to her secret origin. Calvin tells her that she was born in China, where her mother was from and explains that Skye’s destiny lies with him and in the underground city. She comes from a people with special gifts, but Skye is less interested in her yet to be untapped superpowers and wants to know what happened to her mother. Surprisingly, Calvin tells Skye exactly what Whitehall did to her mother and that he’s going to kill the man who destroyed his life. “Best day ever.” Kyle McLaughlin has really been this season’s MVP and he was exceptional again tonight. This season has been real interesting in that the most fun characters are the non-SHIELD characters like Whitehall, Ward, Calvin and Hunter before he got Morse-whipped.

Speaking on, Morse is tasked with making sure her contact doesn’t alert Hydra to the underground city entrance and Hunter tags along like the lovesick puppy the writers have made him since her arrival. The two play “Scarecrow and Mrs. King” as Morse’s contact secretly gives her a location while he walks off with Hydra agents. Hydra’s found their own shortcut to the city and are boring a hole via plasma cannon to get there.

Whitehall calls for a meeting with his lieutenants – Ward, Raina and Calvin. Whitehall wants to know why Skye is here and makes her grab The Diviner/Obelisk. Skye touches it with no problem and uses it to knock out one Hydra goon before more, including Agent 33, draw their guns on her and Ward. Whitehall says he hopes Skye is as helpful as her mother. Busted. Although this seems like a real stretch as Raina has also touched the Obelisk without being considered part of the Skye family tree. Whitehall seems confused as to why Ward wanted to help her until Raina explains he loves Skye and hopes to gain her trust/affection by helping.

Fearing for Skye’s safety and Hydra successfully getting into the city, Coulson has Trip, Fitz/Simmons go down to the city tunnel and insert four detonators to collapse the entrance. This plan makes little sense because Hydra has PLASMA cannons! Looks like I can start my Trip Death Watch again… While they’re working on a plan that can’t possible succeed, Coulson takes May, Hunter and Morse with him to go to the Hydra base to rescue Skye.

While Whitehall taunts Calvin saying he’s going to make Cal watch him kill his daughter, Agent 33 is watching Ward. BTW, Agent 33’s face is kinda silly. Why is she still wearing the scarred mask of May’s face? Does Hydra not have another face hologram they can give her? How is she supposed to walk around undetected looking like a Terminator reject?

While I’m fixing the designs of things, Hydra needs a different color scheme than generic bad guy black especially since that’s what SHIELD wears as well. Coulson’s crew arrives and starts a shootout with Hydra, prompting Whitehall to leave Cal and Skye with one Hydra guard so more agents can fight off SHIELD.  Cal shockingly does manage to break free of his restraints and kills the guard. Next up on the hitlist? Whitehall.

Before Cal can get his much-awaited revenge, Coulson arrives and kills Whitehall. Most anticlimactic death of a major bad guy yet. Seriously, how does the main villain not have 30 bodyguards around him when SHIELD is attacking his location?? Cal is not happy and denied his chance for revenge, goes after Coulson instead.

Ward gets free and unties Skye, who thankfully doesn’t get caught up and shoots him. Cal is pummeling Coulson, but Skye arrives in time to threaten to kill him if he doesn’t back off of Coulson. So it’s clear where Skye’s loyalties lie choosing her father figure over her actual father. I know he’s a murderer and all, but Skye really seemed a bit hard on her dad, considering he told her why he’d become so unhinged. He tells her that soon she’ll become more than she is now and the others won’t understand, but he’ll always love Daisy. Skye promises Coulson she’ll stop whatever the Diviner is being prepped to do and speeds to the tunnel.

Agent 33 comes to Ward confused over what to do now that Whitehall is dead. Ward has her help him saying he’ll figure it out. Ward for new Hydra US leader? The show’s definitely had worse ideas.

This firefight underscores how worthless the show’s version Hydra soldiers are as they get picked off with one shot by Morse, Hunter and May. It’s like the second these ex-SHIELD guys joined Hydra their aim and training drastically started sucking.

Raina has made off with the Diviner and finds Mack in the cave. Mack is apparently now escorting everyone deemed worthy of the Diviner to go in to the main chamber. Skye goes in with no problem, but Coulson has to slug it out again with super Mack. Trip meanwhile goes back down the tunnel to stop the explosions from killing Coulson and May as has an unintentionally funny moment running through the tunnel with a torch like an Olympic runner. He manages to get to the last one right before it explodes. Hmmn, so that won’t be what kills him…

In the chamber, Skye confronts Raina, who says the Diviner gives life just as it starts to activate. Trip manages to run into the chamber to help Skye. Nooooo Trip! The Diviner starts sprouting crystals and a wave of energy (Terrigan Mist) coats Skye, Raina and Trip. Raina gets coated in the Diviner’s ash followed quickly by Skye. Trip tries to save her by kicking the crystals, which releases another wave of energy. This one turns Trip to ash just as Raina starts to emerge from her cocoon.

Outside the chamber, Mack is back to normal and being helped by Coulson. Confirming what most folks online had already guessed, Skye (in “super cool” slow-mo) emerges from her ash shell all set to become the SHIELD agent/superhero Quake as her earthquake powers trigger. Unfortunately, the force blows Trip away so my favorite underdeveloped character is dead. Boooo times infinity. With Skye having actual powers there’s little chance that the show won’t devote even more time to her. Sigh.

Post-credit, a man with no eyes and another Diviner answers his phone and says someone else has been discovered. So “AOS” is gonna be taking a very long break as “Agent Carter” starts its eight-episode run in January. What are you hoping to see when it returns?