With its creative premise, terrific ensemble, mesmerizing visuals and dazzling musical numbers, “Into the Woods” is a dream come true for fans of the revered Broadway production that will undoubtedly win over a new fan base in theaters.

Based on the 1987 musical by legendary composer/lyricist Stephen Sondheim and author James Lapine, the film creatively weaves together classic fairy tale characters from Jack and the Beanstalk, Cinderella, Rapunzel and Little Red Riding Hood. Like the source material before it got “Disney-fied,” the film has a slightly darker twist on the fairy tales so happy endings are in short supply.

Hoping to remove a witch’s curse that will finally allow them to have children, a baker (James Corden) and his wife (Emily Blunt, “Live Die Repeat: Edge of Tomorrow (Blu-ray + DVD)

“) are sent into the woods to procure four items — a red cloak, a golden slipper, golden hair and a white cow. Their actions have them wondering if they’re willing to sacrifice their morals while questioning if the witch (Meryl Streep) will make good on her promise.

For the first act,  Lapine largely adapts his story without any major changes sticking to the established fairy tales. Cinderella (Anna Kendrick) wants to go to the ball to meet the Prince (Chris Pine, Star Trek Into Darkness (Blu-ray + DVD + Digital HD)

) and being tormented by her evil stepmother and stepsisters. Jack (Daniel Huttlestone, Les Misérables [Blu-ray]

) sells his cow for magic beans that lead to his journey up the beanstalk. Rapunzel (Mackenzie Mauzy) is locked away in a tower while Little Red Riding Hood (Lilla Crawford) has to avoid The Wolf (Johnny Depp) on her way to grandmother’s house. 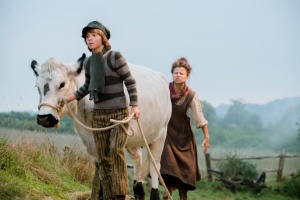 The merging of the stories leads to interactions that are both clever and very funny. More twists and surprises await in the second act as it deviates from the source material. Lapine weaves in the musical numbers well allowing time to develop the story without feeling like the characters are jumping from one song to the next.

,” opted to minimize the use of CGI and green screens, going the more traditional route of creating large, elaborate sets. It helps keep the larger than life characters more grounded and the fantastic sets are all the more impressive considering it wasn’t a computer construction. This may be the one 2014 film I’m disappointed wasn’t shot in 3D as there’s so many opportunities to take advantage of the format. Colleen Atwood’s costume designs are the best I’ve seen all year.

Not surprisingly, Streep reminds us what a singularly brilliant performer she is with yet another role she fully inhabits and makes her own. Streep gives one of the year’s most fun performances as the witch who’s neither wicked or good, just simply right. Streep takes what could be an over the top character and make the witch much more complex, which should rightfully lead to her 19th Academy Award nomination.

Streep isn’t lacking for quality company though with Blunt, Corden and Kendrick in particular, delivering solid performances, but none of the cast is lacking. Pine is a bit of a musical revelation and Huttlestone is fast becoming a go-to performer for musicals.

The big draw though is the musical numbers and viewers will likely leave out with a song or two stuck in their head days later especially in the standout “No One is Alone,” “First Midnight” and “Witch’s Lament.”

Hollywood isn’t quite ready to embrace musicals as readily as comic book blockbusters, but when the results are as entertaining as “Into the Woods,” the genre may be ready to take center stage.