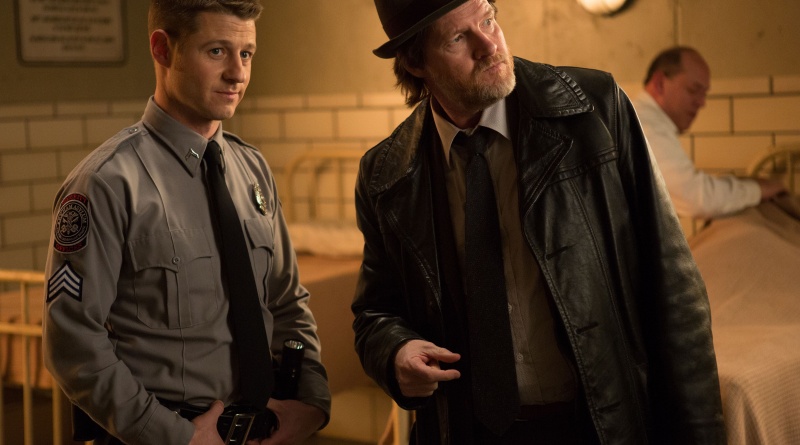 After a rocky first half of its debut season, it seems like the producers took to heart viewer complaints as ‘Rogue’s Gallery’ more closely resembles the pre-Batman Gotham the show could be and marks a welcome step in the right direction.

Following his blow-up with the mayor, Gordon is assigned security detail at the newly re-opened Arkham Asylum. And after witnessing a “theater performance” turned riot, Gordon knows he’s got his work cut out for him. Gordon gets chewed out by the Arkham head, Dr. Lang, for yet another prisoner incident. Kinda hard to see how that was Gordon’s fault and I’m already worried that Lang is going to be that obnoxious supervisor to make Gordon’s life miserable.

Gordon needs to work on his people skills though as he rarely comes across as a guy who could lead others. Hopefully the writers start establishing Gordon better in that regard so he’s not such a one-note character. Someone’s conducting their own electroshock treatments and frying inmate’s brain. Fortunately, Gordon has at least one ally at Arkham in the form of Dr. Leslie Thompkins (Morena Baccarin). Gordon and Thompkins have far more chemistry in their first scene than any he had with Barbara.

Speaking of the lackluster ex-girlfriend, she apparently hasn’t left Montoya’s bed and now despite lusting after her for 10 episodes, Montoya realizes she’s made a mistake and dumps Barbara. This felt more like a sweep a bad subplot under the rug than the intended payoff, but since it wasn’t working, I’m glad the writers made the about face and scrapped it.

The writers opted not to throw in every character so Bruce & Alfred and Nygma sit this one out. Unfortunately, the show crutch character, Selina, still gets worked in and another forced segment. She finds Ivy trying to brave the elements and looking in bad shape and takes her to the one sensible place to bring a homeless girl — Casa Gordon/Barbara. Of course the sole purpose seems to be so Barbara can call and think Ivy is Gordon’s latest interest and send her further spiraling. Problem is does anyone actively care about Barbara at all when she’s such a trainwreck?

Fish is plotting her long-festering betrayal of Falcone and talks with more of his lieutenants. It’s annoying that Falcone doesn’t have one loyal lieutenant and that every one is planning to betray him. Or that no one is smart enough to rat out Fish to advance their own plots. Butch is caught between his loyalty for Fish and one of his childhood friends, Jimmy, who also wants to take over for Falcone. While the more interesting subplot would have been Butch betraying Fish and scheming against her, the writers keep him faithful to her ensuring that no one can have the upper hand on Fish this season. Penguin is getting too big for his britches, enforcing higher taxes behind his boss Maroni’s back. The cops on Maroni’s payroll arrest him and place him in a holding cell long enough for Maroni to remind Penguin who’s the boss. Maroni comes by to release Penguin and delivers the line of the night: “You’re a smart monkey, but you’re a monkey and I’m the zookeeper.”

Back at Arkham, Gordon has to do a real investigation. The most obvious suspect behind the electroshock is the ringleader of the theater performance, Jack Gruber (Christopher Heyerdahl), who seems to be the least crazy of the bunch. As things are progressively getting out of hand, Gordon calls in Bullock, who injects some much-needed fun into the episode as he brings in Lang for questioning to allow Gordon to investigate without any obstructions.

Gordon and Bullock stumble onto the same suspect – Nurse Dorthy, who actually isn’t a nurse, but an inmate who slipped through the cracks. It was a bit of a plot convenience that Lang didn’t bother telling Gordon all this time that Dorothy just acted like a nurse. To cover her escape, Dorothy unlocks the inmate cells and in the ensuing attempted break-out she gets trampled. Gordon and Thompkins manage to get to a secure gate and the inmates are returned to their cells during the commercial.

While Bullock, Essen and Gordon celebrate Gordon’s win in thwarting Arkham’s shocker bandit, the coroner arrives to reveal Dorothy was a shock victim too. And as hinted maybe a bit too easily, the real culprit was Gruber, who unleashes his fully under control shock victim on a security guard and Lang.

Gordon and Bullock arrive back at Arkham in time for Lang to give Gordon a note from Gruber before dying. Gruber looks to be at least a problem for another episode for Gordon, but I hope the writers stretch that next confrontation out a bit. Apparently “Gotham” is taking a week off so this return will be interrupted by a week and hopefully from then on, we’ll get a nice string of new episodes.

This one was promising though so there’s some reason to be optimistic about the future of the show. Let’s hope this wasn’t the exception.