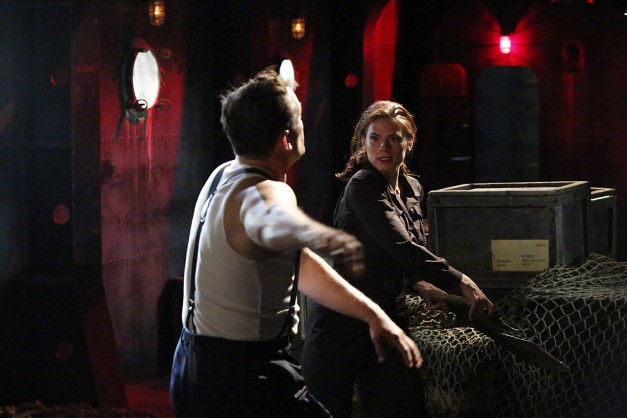 One: Any scene with Peggy and Jarvis is gold. I don’t need any peripheral supporting characters besides Jarvis (maybe Howard Stark) as the chemistry with Hayley Atwell and James D’Arcy is spot-on perfect even at this early stage in the series and they can’t have enough screen time together. Two: The other supporting cast, particularly the Keystone Cop stand-ins, the SSR, are a poor man’s version of CTU where Peggy, like Jack Bauer in “24,” has to work twice as hard in getting her mission accomplished from trying to evade their bumbling attempts to hinder her plans.

Three: The writers commendably are trying to give Peggy a personal life, but hanging out with cloying gal pal Angie (Lydsey Fonseca) are easily the show’s weakest moments. Four: Whatever shortcomings the show has, it’s mostly moot thanks to Atwell, who remains one of this year’s brightest and must-see stars.

Borrowing a page from a CW comic show, Peggy narrates an opening explaining her secret mission – tracking down Stark’s stolen inventions and clearing his name. Not sure if that works mainly because that kind of monologue doesn’t strike me as something we’d hear from Peggy.

Dooley and Krezminski track down the hotel room of the Levithan goon and grab his magic typewriter. That will likely come into play later. Peggy is still trying to decipher the heart-shaped symbol Leet Brannis was drawing in the dirt before he croaked when a guy crawls up to her window looking for some quality time with his woman. Peggy and her gun assure him he’s at the wrong room. The next day, that tyrant landlady Ms. Fry lets the ladies know nothing can avoid her eagle eye and she kicks out the girl for her late night rendezvous. There’s eventually gonna be a point to all these segments at the boarding house, but so far they’re a drag on Peggy’s adventures. 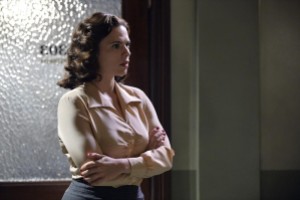 At SSR, those “lovable” chauvinistic bastards (and Sousa) positively ID the bumper from last week’s wreck as Stark’s property and bring Jarvis in for questioning. Peggy was hoping to investigate Stark’s broken into invention room to determine how his property was stolen, but first she’s gotta get Jarvis sprung.

Thompson is layig on his overconfident for no reason bad-cop routine and Jarvis isn’t flinching until Thompson pulls out his ace card – he knows Jarvis was accused of treason and threatens to get Jarvis deported. This, of course, is news to Peggy who pulls a fast one getting Dooley to sign off on Jarvis’ release without him realizing it until too late.

While I loved him in “She’s Out of My League,” Kyle Nornheimer is perfectly annoying here as SSR agent Krzeminiski. He lacks the laid-back likability of Harvey Bullock (comic or “Gotham” version) and doesn’t work well as comic relief either.
Thompson and Dooley are too condescending and the SSR is doing wrong everything that SHIELD so far has done right in being a major impediment to our hero instead of a helpful asset.

During a commercial we get a teaser for Netflix’s “Daredevil,” which will see all the episodes available on April 10. Now I know how I’m spending that weekend.

Angie barges into Peggy’s room with more tales of misery as told by a diner waitress. Peggy, having far more important things to do, tries to brush her off as Ms. Fry introduces a new girl, Dottie Underwood (Bridget Regan). Again, these scenes are too worthless for a limited series to not have a purpose so I’ll keep patiently waiting on the payoff.

Back at Casa Stark, Peggy and Jarvis go down hole in the invention vault in search of more clues about the break-in. Peggy wants to know about Jarvis’ treasonous charge and thankfully Jarvis (and the writers) don’t make it some drawn out secret. Jarvis’ girlfriend, Ana, is Jewish, which provided complications during World War II and Jarvis forged his commanding officer’s signature to get her out of the war zone. Howard Stark helped him out and buried the treason charge.  As they explore the sewer/escape route, Peggy spots a boat with the same marking as Brant’s message.

On the boat, they find Stark’s inventions. How long would that have dragged out on shows with a full 23-episode season? Jarvis shows Peggy one especially interesting device, The Constrictor (no, not the Marvel villain with the adamantium coils), a muscle relaxing device. Peggy is ready to call the SSR and rub it in their faces that she handled on her own what the entire office failed to do when Jarvis runs through how disastrous that plan would actually turn out.

While Peggy wants their respect, Jarvis gives her the Batman speech and tells her she has to do her good from the shadows. Sold on the idea provided Sousa can at least get the credit for the recovery, Peggy has Jarvis call it in, but warns him they know his voice so he uses an awful New Yorker impersonation to get SSR down there. 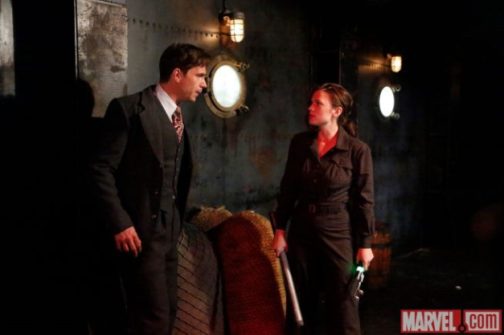 Before they arrive, Peggy has to tangle with the ship bodyguard, who she dispatches with a little help from Jarvis, the Constrictor and a lead pipe. With the Marvel and Spider-Man licenses so screwy, I’m wondering if Marvel could use Spider-Man’s villains The Enforcers as they’d be a perfect fit for Agent Carter.

As SSR transports Stark’s merchandise back to headquarters, a shadowy figure observes them. Krzeminski gets the short straw and has to take the bodyguard to prison, but gets distracted when he asks if the English broad was working with them. Since this would clearly tip SSR off to Peggy working off book, a car bumps them and its driver shoots Krzeminski and the bodyguard. Well, guess that’s one less annoying character to worry about…

Peggy comes to work and sees the SSR receptionists crying. That seems a stretch since Krzeminski was the worst of the SSR bunch as the top chauvinist, adulterer and all-around slimeball. Somehow, Dooley manages to turn Krzeminski’s death into a rallying cry to bring in Howard Stark as this was all his fault. Oh SSR, you’re such clueless putzes.

Needing to see one friendly face, Peggy goes to Angie’s diner to presumably apologize for not instantly befriending her nutty stalker share about her day. Peggy doesn’t understand why she’s concerned about Krezeminski’s death though as they weren’t really friends. Angie gets harrased by another customer and all’s well for this episode of “Agent Carter.”

Annoyingly, we won’t get another new episode until Jan. 27. It’s amazing that a limited series can have an off week. So we’ll pick things back up in two weeks. Till next time.