Since its inception, “Arrow” has drawn comparisons to Batman, but tonight’s episode took a page from DC Comics’ other big icon in a fitting follow-up from the mid-season shocker.

,” tonight we see how Team Arrow handles itself without their leader following Oliver’s fatal encounter with Ra’s al Ghul.

“Left Behind” was slower-paced than some episodes this season, but in the context of the season as a whole, it was an essential one that opens up a lot of potential subplots through the rest of the year.

It’s been three days since Oliver left for his duel against Ra’s and no one in Starling City knows the result. More specifically that he took a sword through the chest, got kicked off a ravine and is dead.

But since crime hasn’t taken a holiday in Arrow’s absence, Arsenal is pursuing crooks along the streets and he’s joined by Arrow?!? Scratch that, it’s just Diggle in the suit trying to master the whole master archer thing. After they nab one of the two crooks, Diggle confesses he prefers his gun to a bow. Back at Verdant, all of Team Arrow (… save Arrow) realize they’re not quite at the top of their game with Oliver away. Diggle and Roy are beginning to consider Oliver isn’t coming back, but Felicity is still in denial.

Felicity has to head back to her other gig and sees Ray fine tuning some gauntlets on his A.T.O.M. armor. I’m still a bit leery over Atom being the show’s version of Iron Man and am very curious to see how bulky his costume looks. Of course it will by default automatically be the best live-action Atom.

But it’s slow going for those of you pulling for Ray to fill Arrow’s shoes as Starling City’s protector, especially since Felicity doesn’t seem too keen on helping Ray work out the kinks.

Initially, this week’s Hong Kong flashback felt tacked on, but it ends up tying in to the current events in a significant manner. Waller has Oliver and Maseo track down an explosive compound that if combined with another element could level the city. Maseo is far more concerned with finding his wife, Tatsu, who has vanished after her fight with China White. Oliver doesn’t understand why Maseo is so upset as he’s sure Waller will honor her word and resume the search for Tatsu after this mission. Ah, poor dumb Oliver. Maseo knows Waller’s lying. They break into a military lab and after a shoot-out with China White’s Triad pals, Maseo secures the compound. Oliver lets one get away, which he explains to Waller was him simply freezing up. Maseo knows Oliver is lying and Oliver confides that he put a tracer on the guy so he can lead them to Tatsu. Maseo says he will never forget Oliver’s actions.

Back at the ravine, someone comes and takes Oliver’s body.

Merlyn is continuing Thea’s training when she rushes to her cell phone thinking a text was from big brother. In a no-lose situation no matter who won the Arrow/Ra’s fight, Merlyn realizes now since Oliver didn’t call Thea, he’s as good as dead. But first, he goes to Verdant to get the news from Team Arrow. Diggle draws a gun on him, which Merlyn brushes off by saying bullets are merely annoying. Diggle decides to up the ante and pulls out a second gun. Merlyn tells them Oliver is likely already dead, but just to be on the safe side, he hops on his supersonic jet to the site of Ra’s and Oliver’s battle and finds Ra’s sword.

While Merlyn is jet-flying (and quite possibly limousine-riding), Team Arrow has found a connection between the robber and Starling’s aspiring crimelord, Danny “Brick” Brickwell (Vinnie Jones).  In the comics, Brick is an invulnerable superhuman. In a rare misstep for the show, the writers didn’t make it fully clear how Brick was able to survive bullets. the series is venturing more into straight up superheroes and super villain territory so it’s not a big leap at this point to just explain he has powers. Hopefully that gets addressed for the sake of those unfamiliar with the comic version.

Team Arrow remains a step behind Brick for most of the episode. They track his cell phone too late to catch him at one of his bases thanks to an assist from Laurel, who firmly believes Oliver is coming back no matter what Merlyn says. No matter, Merlyn returns with Ra’s sword and Oliver’s blood. Merlyn trying to work up an iota of believable expressions of sympathy is hilarious. Felicity analyses the blood and it comes back positive as Oliver’s.

Team Arrow is distraught. Felicity lashes out at Ray for trying to be a hero, a decision that will ultimately lead to his death. Emily Bett Rickards really brought the emotion throughout this episode. Roy is crushed when Thea asks if he can have Arrow search for Oliver. Merlyn gets worried the League will come gunning for him and tells Thea they’ve got to leave Starling ASAP.

Diggle pieces together Brick’s plan — he’s plotting on stealing the police evidence files, which is keeping a majority of Starling City’s biggest criminals behind bars. They get to the police storage just in time to stop Brick. Diggle and Arsenal fight Brick and his goons to a standoff, but Felicity jams drops the security gate to prevent them from following and potentially getting hurt. 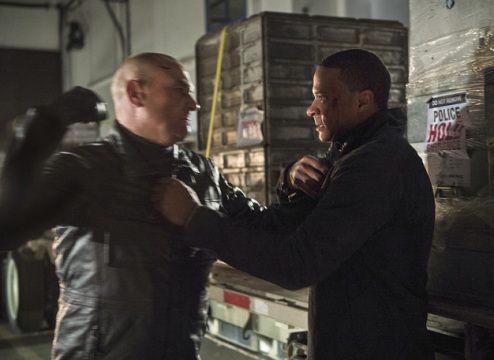 Diggle chews her out for not trusting he and Roy to get the job done, but Felicity says without Oliver there is no team and walks off. She apologizes to Ray, but says she can’t lose another friend and won’t help him get A.T.O.M. operational. Laurel comes down to Verdant and Diggle updates her on everything. Diggle says he always looked at himself as Oliver’s bodyguard and this time he couldn’t save him. Now with Felicity gone, hes not sure if he’s coming back leaving Laurel all alone in the “Arrow-Cave” and her eyes rest at Sara’s Canary wig and sonic bombs.

Brick is ready to fill the crime void left by Brother Blood and Slade Wilson as he rallies his troops around him establishing Brick more in the vein of Daredevil’s arch-nemesis The Kingpin. No sense in “Arrow” strictly sticking to DC characters for show villains, is there?

Two of Brick’s cappos leave the call to arms meeting when they get attacked by a sonic bomb and as one questions their attacker, Black Canary says “I’m the justice you can’t escape from.” We all knew Laurel was eventually going to be Black Canary and the writers laid out this journey for her very well so while Laurel’s costume isn’t as great as Sara’s, Black Canary makes a welcome addition to the heroes of Starling City.

In the cabin, Oliver awakens to Tatsu greeting him. Maseo tells Oliver he brought him to Tatsu so she could bring him back to life. But how?

Next week: Black Canary teams up with Arsenal to battle Brick!