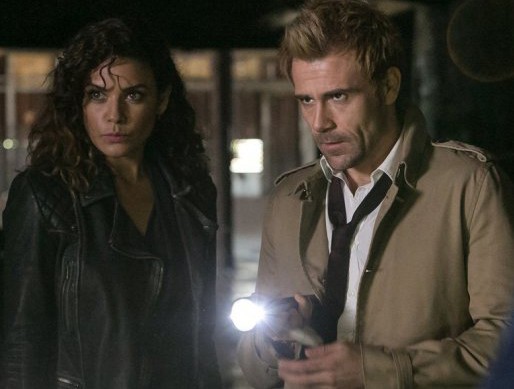 Oh if only CW was able to squeeze in some room on its schedule for “Constantine” instead of NBC. Then we’d not only get more episodes like tonight’s show, but a network willing to let a fun show grow an audience. Not to mention the possibility of a crossover with “Arrow” and “The Flash.” Alas, “Constantine” is now three more episodes from being extinguished by the peacock. But we won’t mourn the show just yet, tonight is all about looking back at another in a now long string of very entertaining episodes.

Tonight was a more personal outing than most in the series thus far. The writers have found a winning formula for the show by not just having Constantine deal with some random magical outburst, but connect the demon nightmare of the week to him or someone in his inner circle. “Quid Pro Quo” gives Chas the spotlight and reveals why he seemingly can’t stay dead. 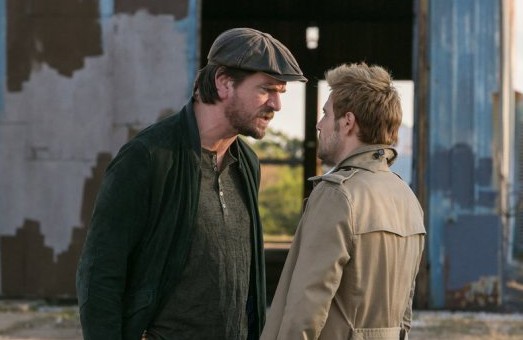 Someone is on a rooftop conjuring a spell that unleashes a smog through a home that envelops a young girl. She’s not just any girl though as she’s Chas’ daughter Geraldine. And just as Chas arrives to his estranged wife, Renee’s home, he finds Geraldine passed out with blood coming from her nose. At the cabin, Zed tells Constantine about her father’s cult, The Resurrection Crusade, and her concerns that he won’t stop coming for her. Have to figure for all the setup, that subplot won’t be satisfactorily covered. The scrying map reveals a situation in Brooklyn, where Chas was heading, so Constantine stocks up his bag o’ weapons including a tendon from Achilles’ heel, which is surprisingly unbreakable.

Borrowing a page from “Arrow,” this episode has a series of flashbacks from two years ago. Chas is on his way home to his wife Renee after a night of boozing at a bar with Constantine, who is about to head out with the one night stand of the evening. A bit concerned that Chas may have had too much to drink, Constantine casts a spell over him. 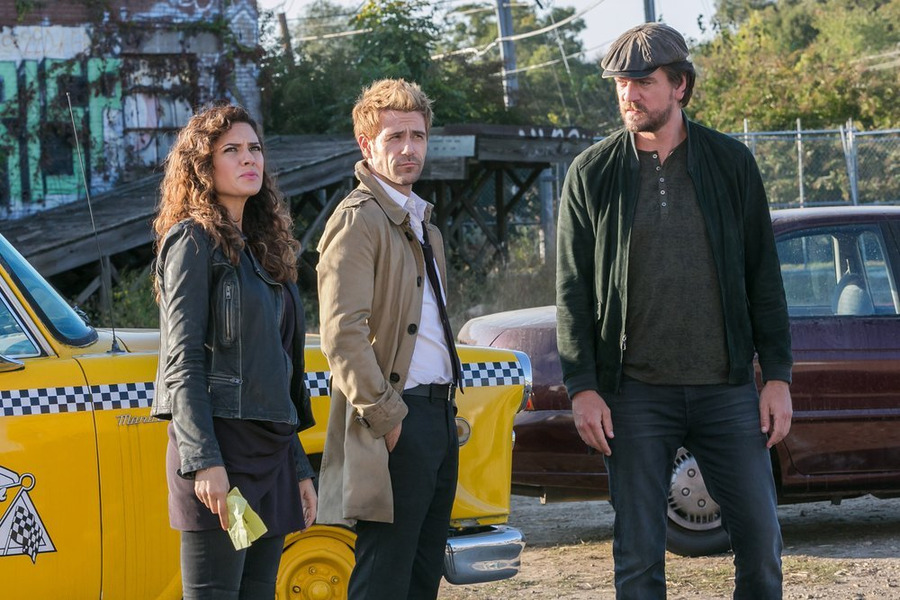 While it didn’t sober him up, Chas is alert enough to try and help when a fire breaks out at the bar, but like the rest of the patrons, he’s trapped and dies. Unlike the other 47, Chas is alive thanks to the spell Constantine conjured. The spell was originally created by Merlin to protect the Knights of the Round Table. If one died at the hands of an inferior knight, they would absorb the lives of those around them.

Constantine didn’t really think it would work, but Chas is now the proud owner of 47 lives.  That’s a smarter choice by the writers than simply letting Chas be immortal and makes these deaths far more meaningful since he doesn’t have an infinite supply. Chas feels obligated to make those lives count and he helps Constantine even as it causes a rift in his marriage.

The gang reunites in Geraldine’s hospital room and Constantine promises to do everything he can to help her. Renee isn’t thrilled to see him and tells Chas to keep Constantine away from Geraldine after the Newcastle incident. Constantine must have had a great track record for everyone to hold that one mistake against him so much. I’m still not positively sure I know what a “cheeky bastard” is, but Constantine must be as he could care less about Renee’s chilly reception and wants to get to work saving Geraldine. His nonchalant attitude of people’s opinion of him is what makes Constantine such a unique and likeable hero. 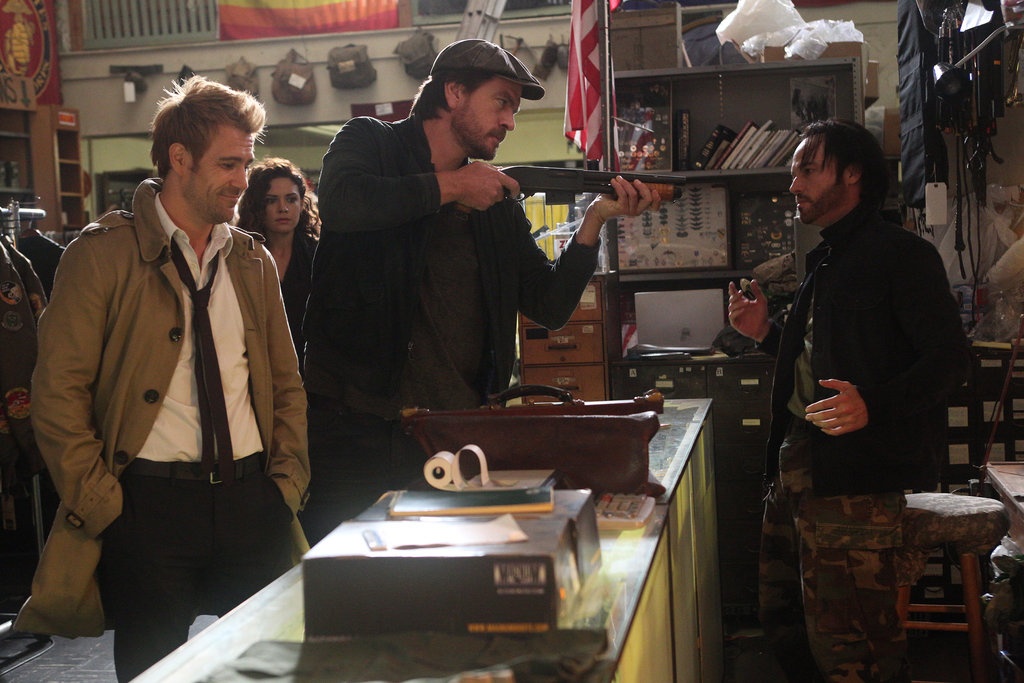 Constantine thinks a medium can help them find Geraldine so he tracks down his old ally, Fennel, in his supply shop stocked with actual weapons. As the case with most old acquaintances, Fennel wants nothing to do with him and points a shotgun at him. Chas snags the gun to assure Fennel his beef with Constantine is not a priority. Properly motivated, Fennel conducts a seance and connects with Geraldine. The victory is short-lived though as her captor interrupts and taunts Constantine before manipulating the flames to engulf Fennel, who probably should have shot first instead of just threatening Constantine.

After a little digging, Constantine and Chas track down the evil presence — Felix Faust (Mark Mogolis)! Faust is a longtime DC villain and constant foe of the Justice League so this was a fun Easter Egg for DC comic fans. Faust agrees to free Geraldine’s soul if Constantine takes out a demon that’s feasting on his stolen souls. The Rising Darkness has enhanced Faust’s powers to the point that Constantine actually has to respect his abilities. 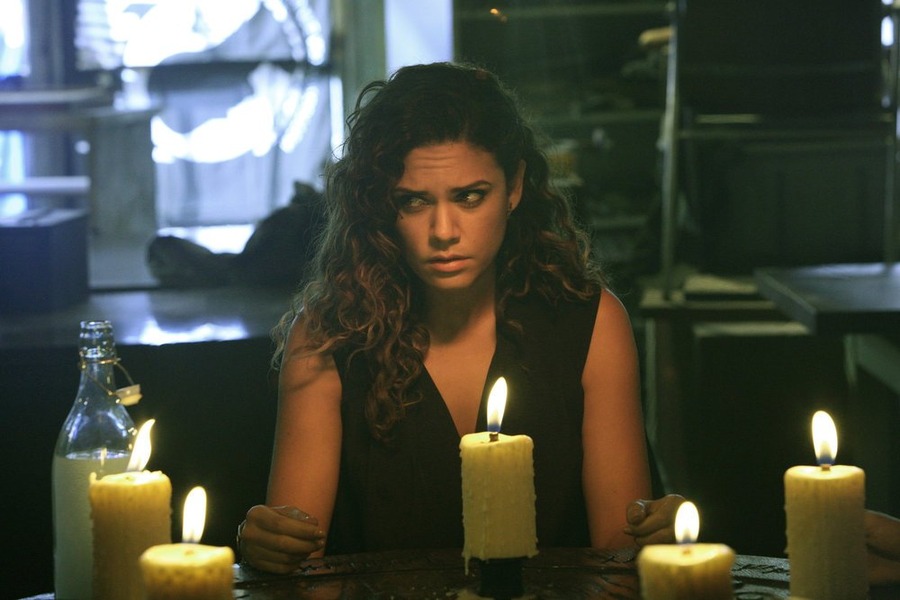 With Zed’s help, Constantine is able to stop the demon, but when he and Chas return to Faust, he learns Faust has altered the deal and wants him to do another task for him. Chas’ patience is spent and he knocks out Constantine and pledges his remaining 32 lives if Faust will release Geraldine. But to prove it, Chas slashes his neck and dies in front of a shocked Faust.

Zed is at the hospital with Renee and Geraldine and her latent psychic abilities are intensifying to the point that she tries to be the medium. Initially, it works and Renee is relieved to be able to hear her daughter again, but the effort is too great for Zed and she gets a psychic backlash.

Faust is all set to make the deal with Chas when Constantine wakes up and rushes out to stop it. Faust is giddy about being able to get another one over on Constantine, but Chas pulls out the Achilles’ tendon and a grenade he snagged from Fennel’s supply shop — killing them both in front of Constantine and a stunned Renee. I get that the writers wanted Renee to see Chas sacrificing himself

Renee is still in disbelief as she talks with Constantine outside of Faust’s base. He tells her Chas takes more time to recover depending on how gruesome the death. Constantine then remembers a conversation with Chas after Renee gave him divorce papers. Constantine suggested Chas could be a powerful ally and help give meaning to the lives of those killed in the bar or he could try and salvage things with Renee. One’s a road to hell and the other is helping Constantine so Chas clearly chose correctly.

Recovered from his grenade blast, Chas visits Geraldine and tells her about some of his friends — the victims of the bar tragedy. Constantine is with Zed as she’s in a hospital bed recovering. He scolds her a bit for trying to do advanced magic and this time she’s in no mood to argue. But before she drifts back to sleep, Zed relays a message from Constantine’s mother: her death wasn’t his fault. It’s a rare moment as Constantine is legitimately stunned and is speechless as he’s left to ponder what Zed meant.

Ugh, this show has so much more to get into that three more episodes won’t nearly be enough. NBC if you bring it back I promise to watch at least two of next fall’s lousy comedies.

NEXT WEEK: Constantine looks to be battling a demented version of “SAW’s” Jigsaw – “Constantine”-style.