The Winter Soldier is a stellar offering from Hot Toys

Captain America: The Winter Soldier was one of my favorite movies of 2014 and set my expectations for The Avengers: Age of Ultron very high. It was darker, more complex and unpredictable than anything we’d seen thus far from Marvel Studios so I was very excited to see Hot Toys was diving in with a line of figures. For my first big figure review, I’m looking at the film’s major antagonist — The Winter Soldier.

Hot Toys figures are high-end and the packaging immediately gives you that prestigious feel like you’re about to open up something incredibly special.

On the front, we’ve got a picture of Sebastian Stan as The Winter Soldier to give you a reference shot of the character from the movie.

It’s a bold move to show you exactly how the figure matches up, but it’s Hot Toys so you’re gonna have to have a magnifying glass and detailed costume guide to catch any gaffes.

The logo earned some bonus points from me for providing the nostalgia kick of the G.I. Joe: A Real American Hero style with the silver embossed lettering and the red, white and blue stripe going off the front. 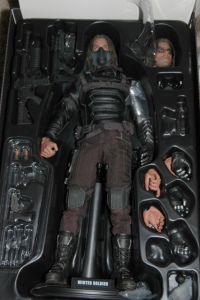 Once you pop the “shoebox” style package off, there’s an action shot insert of the figure to give us aspiring action figure photographers a glimpse of how amazing the figure can look close up.

Like all Hot Toys offerings, there’s no rubber bands or twisty ties to fiddle around with in getting the figure from the package, but before you go fiddling with the figure, take a moment to read through the instructions particularly regarding movement of the metallic arm to prevent paint flaking.

Ok, you’ve popped the top cover and now you’re likely running through all the various display options you’ve got. Spoiler: it’s a lot.

You can pack a lot of WS’s accessories on him, which is convenient for making him a one-man S.H.I.E.L.D.-fighting army. On his right side, he has holsters to fit the COP 357 Derringer and an Intratec TEC-38.

I’m a big fan of packing accessories on the character instead of laying them off to the side so the holsters and knife sheathes are much appreciated.

Be careful of the SIG P226, which fits on the left holster as it has a nasty tendency to pop off with the slightest bit of movement.

The other smaller accessories are also a bit quick to drop and I had a lot of fun trying to find them when they dropped in the snow during the shoot.

On the larger ordinance scale, he’s packing a M4A1 with a grenade launcher. Two grenades are included (but can they go in the gun?).

The most familiar weapon will be the mine launcher/grenade launcher, which was the gun WS used in stopping Fury’s mad dash through D.C.

As usual, there’s an assortment of hands —four in this case — to aid in your set-up. The biggest decision will be which head sculpt to use. Hot Toys never short-changes collectors when it comes to packing the figures with accessories.

And while we don’t get the hanging in Pierce’s “clean” face headsculpt, the two we get are perfectly suited for any Winter Soldier display.

The first is the unmasked, eye paint version. The second is the more sinister masked version with removable goggles. The hairpiece attaches on this head via a strong magnet to keep it in place allowing for a more natural looking extra layer. My favorite of the three options is the mouth mask with the goggles off. He also comes with a stand, but as usual, you won’t need it to keep him upright.

While it’s a moot point for those with a Captain America figure, it would have been a welcome treat if Hot Toys also threw in Cap’s shield to simulate the numerous times through the film WS snags Cap’s main weapon.

There’s no mistaking this is Sebastian Stan as The Winter Soldier and is one of Hot Toys’ better likenesses. People remotely familiar with the character (like my wife) know exactly who it is without question.

Hot Toys does the best eye painting in the business as they manage to avoid the dead eyes that turn so many figures into mindless zombies. Bucky looks focused and determined to carry out his mission and that emotion is conveyed well.

The outfit is tight and the leathery chest piece doesn’t give as much as the more spandex-type material used for other characters. You’ll be able to get him in most poses, but it’ll require a little more work. 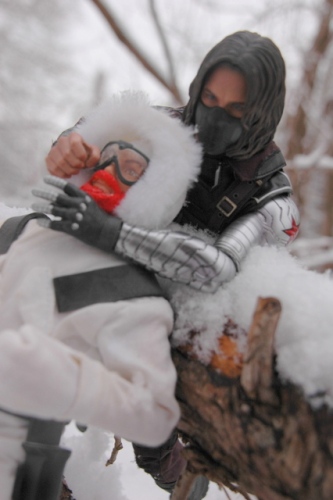 The hands work in out well enough and Hot Toys included two pegs, which is helpful as you’ll likely get one stuck in a hand and not have to stop posing to pry the peg out.

Still, it’d be nice for Hot Toys to just add pegs to all of the hands to make the swaps easier. Ditto for the heads.

The unmasked version pops on and off with relative ease, but the masked head can get stuck and you’ll need hot water to pull the peg out, which happened during the shoot so that’s why there’s fewer unmasked pics.

Pretty dead on from the source material. The leather chest piece has more give than you may expect, but there is some resistance for any Matrix-style posing.The knee pads are thankfully attached to the outfit. I had some occasional frustrations with the smaller handguns. I definitely appreciated not having to re-apply the kneepads after every bit of movement.

The boots are particularly well detailed with nice grooves and not just a few weak treads. The metal arm isn’t die-cast, but the silver paint used gives a solid metallic look. That no doubt helped keep the costs down somewhat.

You’re getting a walking arsenal with enough accessories to make Frank Castle jealous, two distinct heads with a third display option and a high quality outfit for $240. It’s not cheap. But like 99% of Hot Toys’ products, you see what your money went to. That helps make it a bit easier hit to your wallet.

With a regular unmasked head, Winter Soldier would warrant a perfect score. It’s one of the rare times Hot Toys missed out on the best possible accessories. For a film version, we get the main villain’s look perfectly.